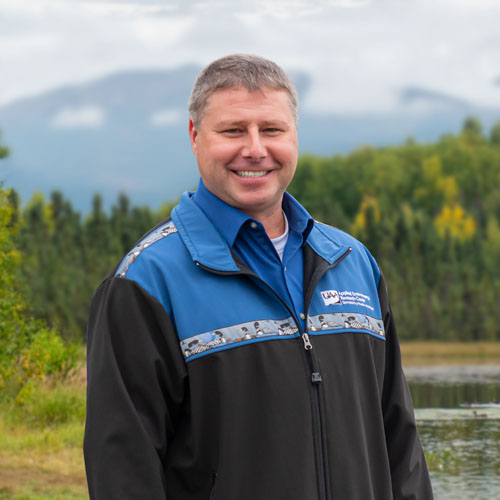 Director of The Applied Environmental Research Center; Director of The Center for Strategic Partnerships and Research
1901 Bragaw Street
Phone: (907) 786-4084
Email: jllibby@alaska.edu
Jeff Libby serves as the Executive Director for the Arctic Domain Awareness Center. He also serves as the Director for the Center of Strategic Partnerships and Research (CSPR) and the Director for the Applied Environmental Research Center (AERC) which operates on a Cooperative Agreement with the United States Army Corps of Engineers and Department of Defense. He previously served as an Associate Dean for the University of Alaska Anchorage, Community and Technical College. Jeff holds an MBA and an M.S. in Project Management as well as an International Master of Business Administration. Jeff also has a Bachelor of Science in Natural Sciences with a concentration in Environmental studies and a diploma in Expertise in Coaching and Neuro-Linguistic Programming (NLP). Mr. Libby is passionate about the Arctic, environmental impacts and climate change. He has been instrumental with student engagement opportunities and is known for developing the first federally recognized and approved research technician apprenticeship program authorized by the U.S. Department of Labor.
Heather Paulsen 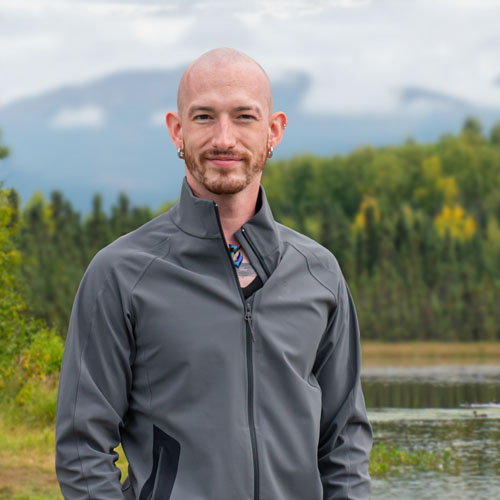 Samuel Franklin was born and raised in Anchorage Alaska, Samuel Franklin joined the Applied Environmental Research Center in summer of 2020 as a participant before moving into a research technician position a month later. He graduated from the University of Alaska in spring 2021 with a B.S. in Natural Sciences, concentrations in biological and geological sciences, and a minor in Public Health. In 2016, he worked as a research technician for UAA maintaining experimental sites and collecting data for climate change studies at Thule Airbase in northwestern Greenland. In his current role at AERC, he primarily works in pacific salmon monitoring, forest resources, and coastal surveying on Joint Base Elmendorf-Richardson to fulfill goals within the Integrated Natural Resources Management Plan. 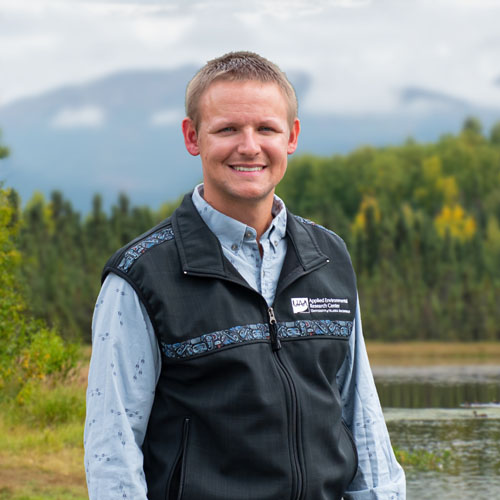 Cameron Wilson joined the Applied Environmental Research Team at the University of Alaska Anchorage (UAA) in spring of 2020. He recently completed his M.S. in Civil Engineering at UAA with a project titled Per Capita Water and Fixture Use in Rural Alaska. The project involved collecting data on water use ranging from per capita consumption based on community water production to measuring how much water is used at each individual fixture within the home at any given time. He designed, built, and programmed custom sensors to accomplish the task and then deployed them in several villages. He is now involved in a variety of projects including coastal GPS surveying and modeling, pacific salmon studies, forestry, and the identification/eradication of invasive plant species. Originally from North Carolina, he grew up in the earthmoving business and has experience operating heavy equipment and project implementation. He earned his B.S. in Biological Engineering from NC State focusing on bioprocessing and alternative fuels, then immediately after graduating and completing his research, he drove to Alaska seeking opportunity. After only a few short months, a field engineering position led to five years in the west Texas oil fields before he was finally able to come back to Alaska to continue his education and a career in research. 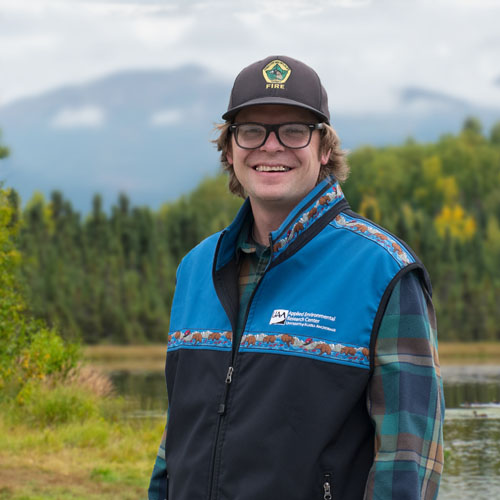 Jay Zlonis Joined the AERC team in July of 2020 as the Lead Forester. He is the project lead for the Forest
Resources project. He received a B.S. degree in Forest and Natural Resource Management from the
University of Minnesota. Mr. Zlonis also maintains his Certified Arborist credentials with the
International Society of Arboriculture. His background includes working for private forestry companies in
Minnesota and Montana, State level work with the Minnesota Department of Natural Resources and the
Hawaii Department of Land and Natural Resources – Division of Forestry and Wildlife, as well as, Federal
level work with the USDA-FS completing both, research at the Missoula Fire Sciences Laboratory and
timber with the Region 1 Timber Strike Team. 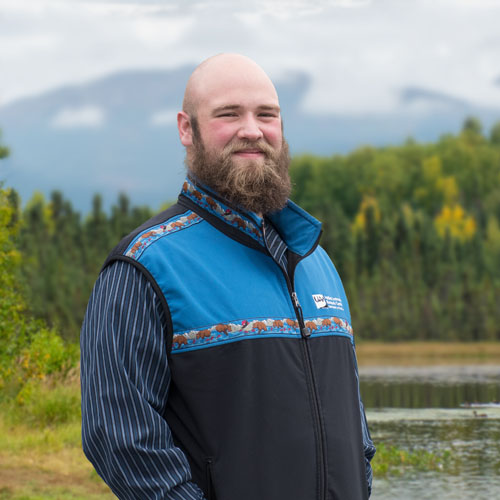 Kevin Fitzpatrick is an Applied Environmental Research Center Apprentice Research Technician and has lived in Alaska since 2003.  After earning his degree in chemistry in 2016 from the University of Alaska Anchorage, Kevin began teaching introductory lab classes in the chemistry department.  His prior laboratory experience involved quantifying protein binding chemistry abnormalities in Wilson’s and Menke’s Disease.  He began his graduate fellowship with the Arctic Domain Awareness Center in the summer of 2019 to identify the photo-enhanced toxicity of dispersed and burned crude oil to arctic mussels and earned his Masters degree in Analytical Biochemistry.  He plans to complete his Masters degree in the Fall of 2021.

Since joining AERC in 2021, Kevin has engaged in several field research projects.  He has become experienced with smolt and spawning adult salmon identification and genetic sampling.  He works with field botanists sprecializing with the identification and management of plant species on Joint Base Elmendorf-Richardson  collecting and processing highly accurate data and utilizing ArcGIS and other similar programs for project delivables.  He is skilled in habitat management, conservation efforts, and report writing. 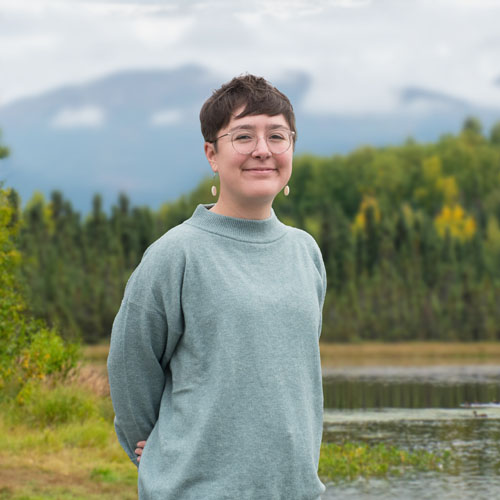 Tasha Chenot joined the Applied Environmental Research Center (AERC) in May of 2021 as a research technician. Raised in the Midwest, Tasha discovered an interest in environmental management while attending Haskell Indian Nations University. She received her B.S. in Environmental Science focusing on the restoration of urban wetland habitat in northeastern Kansas, implementing projects geared towards long-term water quality monitoring and native plant restoration.  In her current role at AERC, Tasha supports a range of field research activities, including invasive plant species assessments and rare plant inventories. 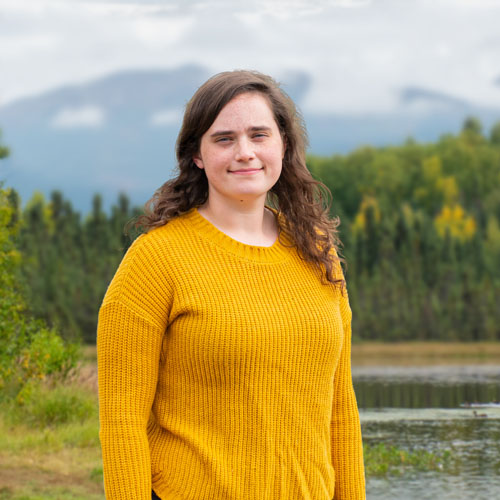 Brittney DePue joined the Applied Environmental Research Team at the University of Alaska Anchorage (UAA) as a participant in the summer of 2019. As of 2021 she has joined the apprentice program with AERC. At AERC Brittney helps to manage projects relating to the population dynamics of salmonid and salmon in lake systems. As well as the prevalence of invasive plant species around the JBER area. After receiving her B.S. in Biology and Psychology from the University of Alaska Anchorage, she has begun work her M.S. in Biology. Brittney’s M.S. project looks at understanding the food web dynamics and structure of Arctic seabirds in the Bering Sea. Other research Brittney has taken part in includes studying how environmental factors impacts Little Brown Bats in Portage Valley, Alaska. 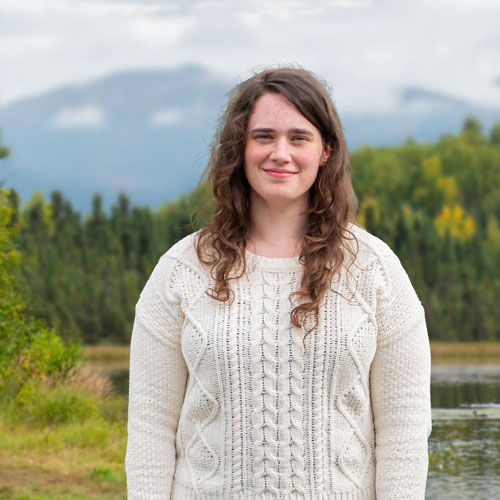 Alexzandrea DePue joined the Applied Environmental Research Team at the University of Alaska Anchorage (UAA) during the summer of 2019 as a participant. Since then she has moved to become a part of the UAA CSPR Research Apprenticeship Program. Through AERC Alexzandrea has been able to take part in projects dealing with management of salmon, invasive plants, bats, and forestry projects. Alexzandrea received her B.S. in biology and psychology from the University of Alaska Anchorage and is currently working towards her M.S. in Biology. Alexzandrea’s masters project is looking into the recent patterns of change in Beringian food webs using seabirds as indicators. By using stable isotopes Alexzandrea hopes to better understand the nature of change being seen in the low Arctic due to factors such as climate change. Alexzandrea also has experience analyzing the relationship between behavior and the environment of Little Brown Bats in Portage Valley, Alaska. In her spare time Alexzandrea likes to explore the outdoors and spend time with her dogs.