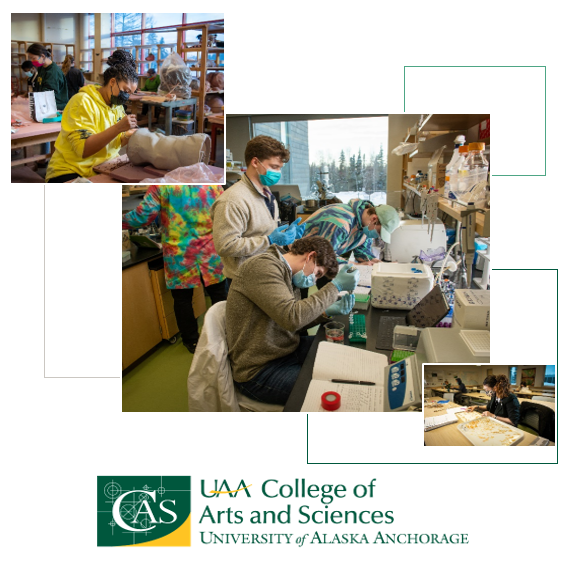 Danelle Shellikoff
Alaska Native Studies
Danelle Alaĝum Dakix Shellikoff asax̂takux̂. Unangax̂ ama Athabascan akux̂. Isanam ama Grayling tanadgusii ilagaan angix̂takux̂. Danelle Shellikoff is Unangax̂ and Athabascan, from the villages of False Pass and Grayling. Danelle Shellikoff obtained her General Studies Associates in Fall of 2021. After the Spring 2022 semester, Danelle will receive her Associates in Alaska Native Studies. Danelle is also currently in the process of applying to the Bachelors of Science in Nursing program, with the goal of becoming a registered nurse in her native community. Danelle is an excellent student, who pays close attention to details and makes sure that she is present for class.

Christine Castro
Anthropology
Christine Castro is a senior at UAA pursuing her B.A. in Anthropology and a minor in History. Castro is an exemplary student and has embraced opportunities to learn about anthropology in both classroom and field settings. In 2020, she assisted with the faunal analysis for the Chernofski Village Harbor Site in the Aleutian Islands with Cultural Resource Consultants (CRC) in Anchorage. For the upcoming summer of 2022, she will be participating in her fourth season of archaeological data recovery and survey for the Sterling Highway project. After graduating, Christine plans to attend graduate school in Alaska, Washington, or British Columbia to continue her studies in archaeology.

Lejonique Trim
Art
Lejonique Trim is enrolled in Beginning Wheelthrown Ceramics and Intermediate Handbuilt Ceramics. She goes above and beyond in the research for her projects in both classes. Lejonique is constantly experimenting and working on several pieces at a time. Three of her pieces were included in the Hugh McPeck Gallery’s Clay Body Invitational Exhibition in January 2022. Her perspective and attitude towards ceramics has helped to foster a more engaging and dynamic studio community.

Ashlee Voorhis
Biology
Ashlee Voorhis is pursuing a B.A. in Biological Sciences with a minor in Geographic Information Services while also working full time at the UAA/APU Consortium Library. She has previously worked with Arctic ground squirrels in Dr. Duddleston’s lab at UAA. A class that Ashlee is looking forward to taking is Comparative Anatomy of Vertebrates, which focuses on the evolutionary, ecological, and physiological implications of shared organs in vertebrates. After graduation, she wants to use her degree to become a wildlife biologist and to hopefully work for the Alaska Department of Fish and Game studying the moose population in Alaska.

Jordyn McNeil
Chemistry
Jordyn McNeil is pursuing her degree in Biochemistry and has demonstrated academic excellence in the classroom, in the laboratory, and in our UAA community. She is performing high impact undergraduate research, mapping metabolic profiling of turtles subjected to anoxic conditions to inform therapies for cardiac arrest and marine mussels exposed to crude oil investigating oil spill remediation. Last summer, Jordyn worked on a project for the US Coast Guard, investigating the toxicity of spilled crude oil and methods for oil spill contingency plans. Jordyn is also active in Chemistry’s ACS student chapter and Chemistry Club, representing as Treasurer.

Elsa Snodderly
English
Elsa Snodderly is pursuing her B.A. in English and has a deep love for literature, which has only expanded through the course of her degree. While at UAA, Elsa has also rediscovered her love of writing and has taken a minor in creative writing in hopes of further developing that skill. After graduating, Elsa hopes to take the next steps towards becoming a librarian so she may continue to share her love of literature with her community.

Kellie Richmond
Environmental Studies
Kellie Richmond is a junior pursuing a B.A. in Environment and Society with a social concentration, and a minor in Geographic Information Services. Kellie’s appreciation for the state’s diverse landscapes, wildlife, and culture only grows the more she learns about it. She is interested in learning more about the use of this traditional knowledge as a way to assist with conservation efforts and adaptation from climate change. Last fall, Kellie worked for 61 North Environmental as a Protected Species Observer to track and monitor the endangered Cook Inlet beluga whale population.

Preston Weeks
Geological Sciences
Preston Weeks is a junior pursuing a B.A. in Geological Sciences. Preston has an interest in geology due to his hobby of rock collecting which began at a young age. He plans on graduating in the Spring/Summer of 2023 and will begin the search for graduate programs this fall to continue his education in geoscience. This summer Preston was selected for an internship with Logic Geophysics & Analytics LLC, a geophysical consulting firm based in Anchorage. Preston will receive on the job training in the use of geophysical tools including ground-penetrating radar, seismic, GNSS, and resistivity.

Denile Ault
History
Denile Ault is pursuing her degree in History. Since her return to UAA to finish her degree, Denile has shown that she is a leader in course discussions- one who can both answer and ask questions intelligently and articulately and whose demeanor and engagement generates excitement among her peers. She is currently doing phenomenal work on an oral history project that highlights issues of identity among Alaska Native traditional healers on the 50th anniversary of ANCSA.

Micah Nauls
International Studies
Micah Nauls is seeking his degree in International Studies. According to his professors, Micah is a gem to have in the class, he was a standout discussant, often sharing insights far beyond his years. He was an engaged and responsive learner throughout the semester. Micah was one of the top students in the PHIL 301 Ethics class in the fall. Micah is affable, down to earth, well-rounded and civic-minded.

Charlotte Flynn
Journalism and Public Communications
Charlotte Flynn is pursuing her B.A. in Journalism and Public Communications. She currently works as a research technician monitoring online health misinformation as part of the Alaska Misinformation Response Project. Partnering with collaborators at Yale University, Rutgers University and others, this project is the first of its kind in the U.S. Charlotte has also worked as a public affairs intern for the First Alaskans Institute with Alaska Airlines and served as a business development intern and proposal coordinator for Bering Straits Native Corporation.

Ella Bryner
Languages
Ella Bryner is pursuing concurrent B.A. degrees in International Studies, Languages, and Political Science. Her focus in the Department of Languages is Spanish. Ella has been regularly participating in the student club, La Tertulia, and has sought important leadership positions in UAA’s student government. Ella has been a member of the Model UN on campus for several years. In addition to her academic pursuits and her participation in UAA organizations, Ella also maintains an off-campus job. Ella plans to spend the next academic year studying in Granada and Seville, Spain, where she plans to apply all the knowledge she has learned at UAA to real-world experiences.

Jaden Reed
Music
Jaden Reed is a freshman in the Bachelor of Music Performance Program. He has distinguished himself as a gifted musician and performer, winning first place in the National Association of Teachers of Singing Music Theater Competition, upper college division. Jaden won first place in this division at both the district and northwest regional levels. Jaden recently performed in featured roles with the UAA Opera and Music Theater Ensemble in Fairbanks.

Katherine Sakeagak
Physics and Astronomy
Katherine Sakeagak is pursuing a dual major in Civil Engineering and Mathematics along with plans to complete a minor in Physics as well. She has conducted multiple high-quality research projects working with faculty in the UAA Physics and Astronomy department, starting through the Alaska URISE program and studying galaxy evolution with Dr. Erin Hicks. Katherine has presented her research at the Alaska URISE Research Celebration in 2019, and the Alaska Space and Grant Symposia in 2021 and upcoming in 2022.

Matt Green
Political Science
Matt Green is pursuing a degree in Political Science and International Studies. Matt is heavily involved with the Model UN at UAA. He worked closely with Professor Kimberly Pace to develop the first Fall Virtual Model United Nations Conference. Matt served as the Secretary General for the Fall conference, and as the President of the General Assembly for the Spring conference with over 100 participants. Matt also serves as a CESA, a representative for USUAA, and is a member of the Honors College in the Leadership Track.

Haley Duryea
Psychology
Haley Duryea is a junior pursuing a B.A. in Psychology with a minor in Justice. She is currently on a research team through UAF that studies isolation and loneliness in older adults and the effects of COVID with suggestions on how to improve well-being. Haley is also a part of the Seawolf Mentor program, a program hosted through the Mentor Collective. In this program. Haley has several mentees as well as a mentor.

Tylantiss Atlas
Sociology
Tylantiss Atlas is pursuing a degree in Sociology. She chose to major in sociology her freshman year because she was in a class called Sports and Society. Taking this course allowed her to have a different outlook and perspective on situations going on around her. Ever since, sociology has been something that continues to be intriguing. Tylantiss has been a full-time student athlete while working on campus at a part-time job. As a student athlete, Tylantiss loves UAA and the academic resources provided.

Special thanks to our sponsors: 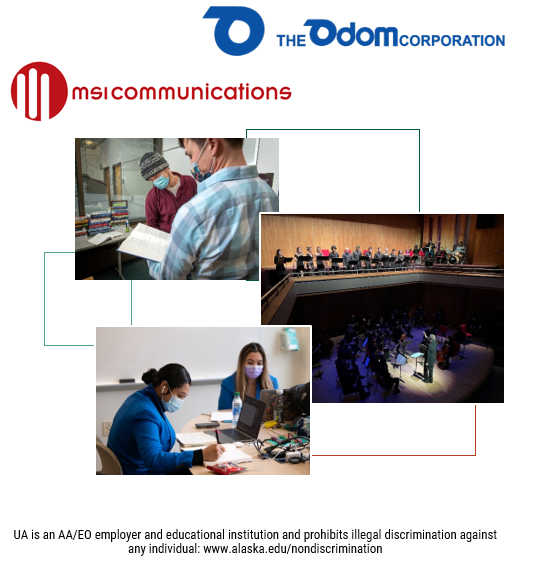