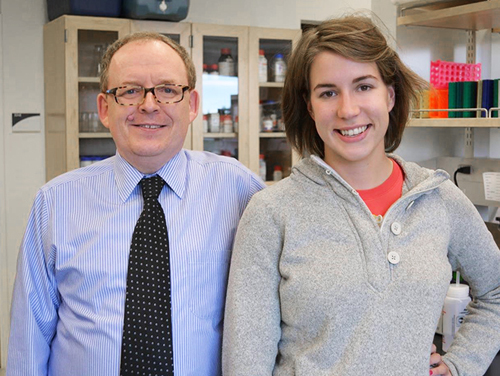 Dr. Rainey and Lacey Merrill in the Rainey Lab, UAA

Lacey Merrill's path to professional success isn't your typical story. As an adolescent growing up in Girdwood and attending South High School, Lacey always knew she wanted to become involved in the sciences but wasn't sure about the path she would take. A physicist by nature, Lacey explored introductory courses while getting a feel for the disciplines that captivated her the most. "I liked physics in high school…I was always very science-oriented," said Lacey. While at UAA, Lacey took courses from every discipline from physics to chemistry, which rounded her education and helped her discover her true passion. "The first time I met with an advisor, she mentioned the biology degree, but I didn't really think about it until I declared my major a couple of years later. I liked the introductory courses that I took and was really interested in it, so I stuck with biology and it's worked out for me so far."

While earning her B.S. in Biological Sciences at UAA, Lacey took advantage of the opportunity to participate in the Department of Biological Sciences' 2012 Research Experience for Undergraduates program. The REU program is funded through the National Science Foundation and aims to give undergraduates the opportunity to participate in field and lab research with professionals that otherwise would not be possible. During the 10-week program, Lacey traveled to Greenland to study arctic climate change with faculty mentor, Dr. Jeff Welker. "It was an amazing experience; I worked for Dr. Welker doing climate change research. They are doing long-term experiments in the high arctic which will help predict what will happen as climate change progresses," said Lacey. The experiences Lacey had while participating in the REU program not only helped build her resume but gave her a glimpse into the endless possibilities available to her while pursuing biology. 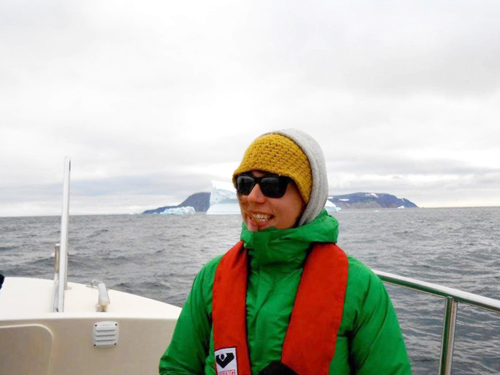 BioSci Alumnus, Lacey Merrill in Greenland for the 2012 REU program.

During Lacey's senior year at UAA, she landed a position working as a lab assistant with Dr. Fred Rainey in the Rainey Lab. "Right before I graduated, I spoke with Dr. Rainey about finding a research position. I was interested in doing research because I hadn't really done any as an undergraduate. I wanted to talk with him to see if he had advice about where to apply and what to do next," said Lacey. Within minutes, she had a temporary position at Rainey Lab. Lacey mused, "He said, 'Well do you want to work for me?', and I said, 'Sure, that sounds great!" Lacey had previously taken microbiology courses with Dr. Rainey and knew that the position would be an amazing opportunity. "He loved helping students and he taught me a lot about science. It was a really great experience." 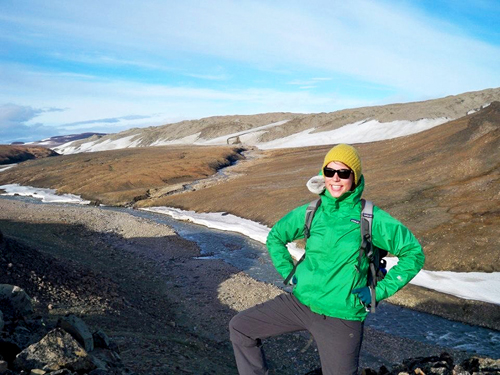 Lacey Merrill in Greenland during the 2012 REU program.

Lacey helped manage a plethora of projects while working at Rainey Lab—from ordinary tasks such as ordering supplies and lab maintenance to constructing a protocol for extracting polar lipids of new bacteria via two-dimensional thin layer chromatography, Lacey learned the skills necessary to advance her to the next professional level. Lacey said on the subject, "Stratos Genomics was looking for lab assistants, so I applied. A lot of the work I had done with Dr. Rainey was similar to what they were looking for, so that was really helpful." Yet again, Lacey found success in pursuing a lab assistant position and secured the opportunity with Stratos Genomics, moving from Anchorage to Seattle, WA. 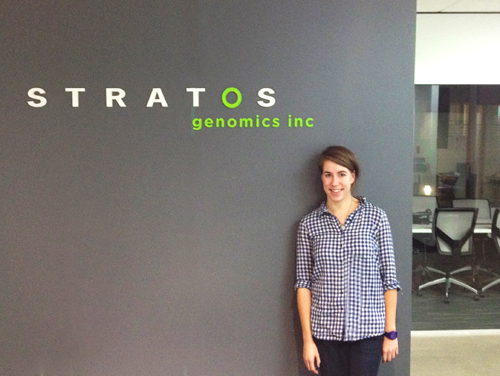 Stratos Genomics is a spin-off of the Seattle-based, Stratos Group LLC., and their aim is to establish the next 'gold standard' of DNA sequencing. The company is developing technology using the "Sequencing by Expansion™" (SBX) method. The company describes the SBX method as follows, "SBX is a simple, elegant, single-molecule detection process that circumvents the limitations of competing technologies, allowing accurate, ultra-low cost whole genome sequencing." At Stratos Genomics, Lacey recently moved into the Biochemistry department where she is helping to create the next generation technology. An average day for Lacey is jam-packed with science—tasked with running a few experiments a day, Lacey spends hours designing, prepping and running tests. Working around 50-60 hours per week, Lacey is in a constant state of motion but remains intensely passionate stating, "I thought it would get to me after a while, but I still really love it!" Her position at Stratos Genomics keeps her professional life interesting as the work is constantly evolving; Lacey states, "It is very fast-paced, someone will have an idea and it's like, 'Okay, let's order the supplies, let's get it and try it out'…if something doesn't work, then it's time to get rid of it and try something new." With everything considered, Lacey above all else rejoices at the fact that she has the opportunity to pursue her passion every day she wakes up. When asked what she enjoys the most about her position, she replied, "All of the science that I get to do. In what I'm doing at the lab, it looks like I'm just moving clear liquid tube to tube, but I love it. The molecular biology that we are doing is crazy to think about, it's stuff that I didn't know was possible, but I do it every day. It just blows my mind."

For Lacey, the path to take may not have always been clear, but it is now clear to everyone that she has found her niche. Lacey says of pursuing a baccalaureate in biology, "If you are interested in it, definitely pursue it." As Lacey now knows, finding a career or passion is not always a linear process, but is a process that requires flexibility and an openness to possibilities. Lacey imparts words of wisdom to undergraduates considering a degree in the biological sciences, stating, "Keep an open mind about what your degree can do for you…a lot of what you will need to know you may not have learned directly in the degree (program), but it provides a basis for how to learn new things, so keep an open mind about what you can apply for." Lacey kept an open mind and it led to the job of her dreams, and if you take her advice, you just may find yours too.