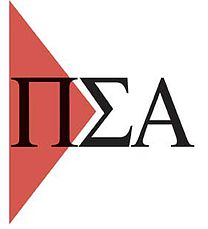 Pi Sigma Alpha, the National Political Science Honor Society, is the only honor society for college students of political science and government in the United States. Pi Sigma Alpha is a member of the Association of College Honor Societies (ACHS) and is designated as a "Specialized, Upper-Division" society by ACHS.

There are now almost 700 chapters of Pi Sigma Alpha located on college and university campuses in every state of the United States and in Guam. Junior- and senior-level students at UAA are eligible to join Pi Sigma Alpha in either the fall or the spring semester.

History - How We Began and Background Information

Growth in the honor society was gradual throughout the 'twenties and 'thirties and accelerated after the Second World War; today there are over 650 chapters throughout the country. There is at least one college or university with a Pi Sigma Alpha chapter in every state and the District of Columbia and, as of 1995, the U. S. territory of Guam.

Purpose of an Honor Society

The Articles of Incorporation of Pi Sigma Alpha state as one of its purposes "to stimulate scholarship and intelligent interest in political science." The society functions at the national level, sponsoring programs and events of value to the profession and teaching of political science, and at the chapter level. Each chapter is encouraged to provide a framework for enriching the exposure of its members and the wider university community to the study of government and issues of public concern. The goals of Pi Sigma Alpha are consistent with the aims of the Association of College Honor Societies (ACHS) as set out in the ACHS Booklet of Information. This material provides a good framework for understanding the meaning and value of a political science honor society and its place on an American campus, and makes worthwhile reading.

Some of these benefits are unique to the national political science honor society. Others apply to members of any honor society recognized by the Association of College Honor Societies.

Membership in an honor society is a worthy distinction in itself, and as a measure of academic achievement can provide a tangible advantage in a competitive world.  All Pi Sigma Alpha members, regular and honorary, receive a certificate of membership and permanent enrollment in the society's membership data base, maintained by the National Office.  Upon request, the National Office will provide letters verifying membership to prospective employers or graduate schools.

Because Pi Sigma Alpha is a member of the Association of College Honor Societies (ACHS), the U. S. Office of Personnel Management allows its members to apply for federal government positions listed at a higher entry-level grade than non-member candidates.

Members are entitled to wear the Pi Sigma Alpha key at any time, and the medallion and honor cord with cap-and-gown at graduation and on other official occasions.

The National Office supports the awarding by each chapter of a one-year student membership in the American Political Science Association for one member each year.

Pi Sigma Alpha gives students the opportunity for valuable administrative experience as chapter officers or organizers of chapter activities.  Chapters can compete for the Chapter Activity Grants awarded each year by the National Office.

Criteria for membership in Pi Sigma Alpha are:

There is an initiation fee of $35.00 and there are no annual dues. If you believe you are eligible for membership in Pi Sigma Alpha, contact Anita Franciosi at the Department of Political Science, SSB 352.