The Pew-MacArthur Results First Initiative was a joint effort of The Pew Charitable Trusts and the John D. and Catherine T. MacArthur Foundation that assisted states in implementing evidence-based policymaking using innovative and exacting cost-benefit analytic methods. The goal was to encourage states to be good stewards of public monies by developing policies and investing in programs that rigorous research has shown to be effective. In the spring of 2015 Alaska became the 19th jurisdiction to partner with the Pew-MacArthur Results First Initiative.

The Alaska Justice Information Center (AJiC) was responsible for coordinating the Results First Initiative in Alaska. In this role AJiC oversaw all aspects of Results First including forming, scheduling, and facilitating each of the initiative’s three technical work groups in the collection and compilation of detailed information on Alaska’s adult criminal justice programs.

The Alaska Results First Initiative: Adult Criminal Justice Program Benefit Cost Analysis report was released in October 2017. It showed that most of Alaska's evidence-based adult criminal justice programs were showing positive return on state investment of money. Notably, all but one of those programs were shown to measurably reduce recidivism (the likelihood that an inmate will re-offend when released), which not only improves public safety, but saves the state the costs associated with criminal activity. 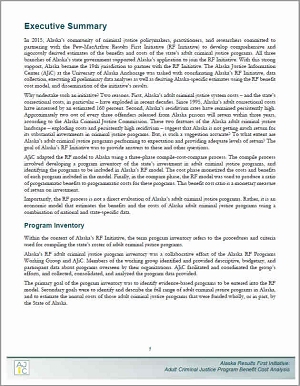 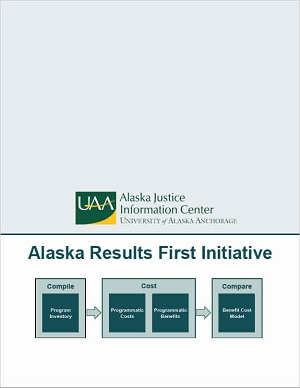