Analysis of state court system data shows a steady decrease in trial court filings for violent and property crimes, but an increase in weapons case filings. 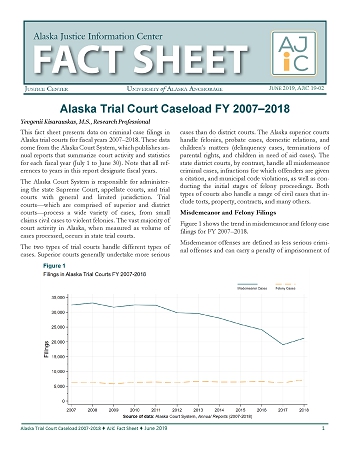 In its data analysis, AJiC found that the number of filings in Alaska trial courts decreased steadily from FY 2007 to FY 2018, with violent and property crime filings either staying stable or decreasing. Other types of cases, such as public order cases, drug cases and DUI cases, also decreased. However, the analysis found that weapons cases increased by 24.7% at the misdemeanor level and 94.3% at the felony level.

The AJiC Fact Sheet is a series of brief reports that describe findings from the descriptive analysis of publicly available data relating to the Alaska criminal justice and legal systems. The fact sheets are designed to assist with decision-making by practitioners and policymakers, and to provide a basis for further analysis. Previous AJiC Fact Sheet reports on a range of criminal justice topics can be found at the Alaska Justice Information Center webpage.