The University of Alaska Board of Regents advanced six candidates to forward to final interviews in the search for a new UA president. Three to four finalists are expected to be announced Feb. 28.

The following day, March 1, the finalists will tour UA campuses and meet with a variety of stakeholders at the University of Alaska Fairbanks.

On March 2, finalists will meet with similar constituencies at the University of Alaska Anchorage. Below is a schedule for the candidates' meeting times and locations on the UAA campus: 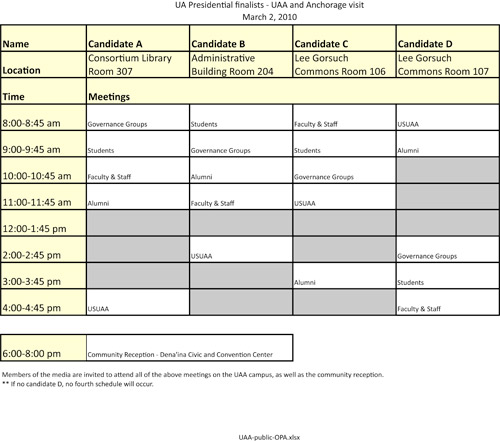 The next day, March 3, the finalists will gather in Juneau to meet with the University of Alaska Southeast community. UAF, UAA and UAS also are working on opportunities for rural and extended campus sites to participate via teleconference or video conference.

In addition, the public is invited to community presentations in Fairbanks, Anchorage and Juneau:

After the whirlwind tour of campuses, the board will meet with members of its presidential search advisory committee and then meet again as a board March 15 to make a final decision. An announcement could come sometime after that.

UA President Mark Hamilton announced last June his intention to retire in 2010. The board began its search in earnest last fall by hiring a professional search firm, Academic Search of Washington, D.C., to assist. Input on the qualities and characteristics of the next president were gathered in Juneau, Anchorage and Fairbanks. Academic Search then advertised the position, which drew a qualified pool of applicants from both within and outside the state, said board chair Cynthia Henry.

"Hiring the president is one of the most important things the Board of Regents does, and we take this responsibility very seriously," Henry said. "After the campus tours, board members will want to hear from our stakeholders and the public about which candidate they think would best lead the UA system. We'll accept public feedback right up until our meeting on March 15. After that, we hope to make an offer to our candidate of choice."

For detailed schedules of campus visits, go to www.alaska.edu/bor/pres-search.