The phrase "When one door closes, another one opens" is especially true for UAA grad Dan Lien '07. He was a budding journalist and public relations professional, but when a new career opportunity presented itself, he decided to make the drastic switch to pharmaceutical sales. 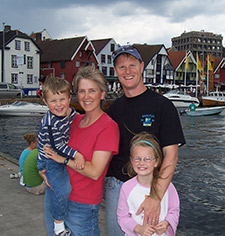 Born and raised in Minnetonka, Minnesota, Dan earned his Bachelor of Arts in Journalism from the University of Minnesota in 1989. During college, he spent time in TV and newspaper newsrooms in the Twin Cities, and worked for four years at Weber Shandwick, a global public relations firm.

But how does one transition from the journalism world to a career in pharmaceuticals? A friend who worked in pharmaceutical sales thought Dan would excel in this career and encouraged him to look into the field. Dan did, and he ended up loving it. He landed a job with Bayer, which eventually brought him to Alaska. He and his wife moved to Eagle River in December 1995 for the adventure and he was able to transfer with his job.

His move to the Last Frontier wasn't the first time Dan had seen Alaska, though. He came with his family while he was in high school and fell in love with it. "Alaska is similar to Minnesota in many ways," Dan said. "Like Minnesota, Alaska has plenty of opportunities to hike, canoe, play hockey and backpack - just on a different scale!"

Dan and his wife Terry have two kids, a daughter (12) and a son (7). The family has developed deep roots in the Eagle River community and plans to continue to spend their short summers and long winters exploring everything Alaska has to offer.

Dan remembers first hearing about UAA's Master of Public Health (MPH) program in a local newspaper article. "A couple of my colleagues were going back to school for their MBAs, but I wasn't driven to do that," Dan said. His interest in public health and an overall desire to learn led Dan to enroll in the relatively new program.

With two small children, Dan knew earning his MPH degree would be a long journey. "As an adult learner with a job and family, I quickly became an expert in time management," said Dan. "Lots of late nights and early mornings meant there was no time for 'fat.' It made me more focused as a parent, a student and an employee."

Like many working parents, Dan took his graduate education one step at a time. Taking one class each semester ended up being the perfect pace for Dan, and he managed to finish his master's degree in just less than four years. "I liked being an adult learner," he said. "I felt like my classmates had a lot of life and job experience to contribute. I met so many great people that I wouldn't have had the opportunity to meet otherwise." 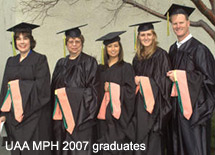 His thesis project focused on a Medicare program that allows pharmacists to bill insurance for patient counseling services - a program called Medication Therapy Management (MTM) - and generated baseline data to allow pharmacists statewide to see the benefits that MTM can bring to Alaskans in the years ahead.

Dan couldn't be more impressed with the quality of the education he got from UAA and the MPH program. "The MPH program is a hidden jewel of the University," he said. "It's got an amazing faculty line-up and is now nationally accredited by the Council on Education for Public Health. The University believes in the program and it has strong support from the community. Applications for admission are booming. That doesn't happen by accident."

Staying connected with his classmates is important to Dan, which is why he serves as the president of the MPH Alumni Association. "It was fun to be a pioneer of the program and help give the program some traction and credibility." As president, Dan facilitates connections between MPH alumni and current students, and advocates on behalf of the program. He also serves as a mentor to current and perspective MPH students who need guidance.

Not only does Dan support his alma mater by volunteering his time, but he also gives back financially. He and his alumni board started the MPH Alumni Association Master of Public Health Scholarship in January to kick-off a program aimed at financially supporting incoming graduate students.

"Having a well-respected higher education institution in our own backyard says a lot about our community," Dan said. "It's a direct reflection of the community in which we live. It provides the brightest minds for Alaska's jobs, and we want to keep those bright minds here in state. It's so important to support our University. We can't afford to have anything less than a top-notch university here. Kids can't just go to the university in the next town over up here. They have to leave the state. That's not ideal."

Dan has worked with GlaxoSmithKline (GSK) for the past 14 years. Six of those years have been spent working in management as a Therapeutic Sales Manager. He's responsible for leading and coaching sales representatives who talk with physicians and other health care providers on clinical data and disease states where GSK makes medicines to help. His main focus is in the arena of cardiovascular, metabolic and urology medications. He manages various representatives throughout the state of Alaska and also a group in Eastern Washington.

Dan describes himself as an "enthusiastic booster" for the MPH program. In fact, he talks up UAA any chance he gets. His diploma and a photograph of himself at graduation hang proudly on his office wall. "I take great pride in being a UAA alum. It's a great program and a great school."