Polly Reasner is driven, and she's willing to go the distance to get what she wants. An Alaskan through-and-through, Polly was born and raised in Nome, where her father worked as an Alaska State Trooper. Her family moved to Anchorage in 1977 and Polly graduated from Dimond High School in 1981. She met her husband-to-be, Robert, in the 10th grade. 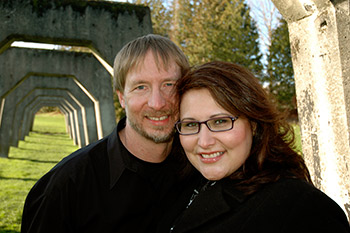 After their wedding in 1981, the Reasners worked as pastors in several places across Alaska, from Delta Junction to Wasilla, before settling in Sterling, just outside of Soldotna. Polly and "Pastor Bob" are now pastors at Abundant Life Assembly in Sterling, where they've lived for the past 20 years.

Polly enrolled in a computer class at Kenai Peninsula College (KPC) in the '80s and the rest is, as they say, history. She earned an associate degree in 1993, a certificate in small business management in 1994, and finally a bachelor's degree. To finish her B.A. degree, though, she had to drive 290 miles roundtrip from Sterling to Anchorage three times a week for two semesters. After putting thousands of miles on her car, Polly earned her Bachelor of Arts in Justice with a minor in Business Administration in 1996.

"It made for some interesting drives," Polly said. "I checked out a lot of books on tape from the library. My husband and I considered it an investment in our future and I have never regretted the sacrifice it took to finish."

But her long commute to Anchorage to finish her bachelor's degree was a small feat compared to her next educational endeavor. Polly later attended the Thomas M. Cooley Law School in Lansing, Michigan while her husband patiently waited at home. It was at law school, studying property law and contract law, that Polly realized her passion for real estate. She returned home, took the real estate exam and earned her real estate license. She hasn't looked back, and is currently a REALTOR® at Freedom Realty in Soldotna.

Real estate is a perfect fit for Polly because she loves connecting with people. "There is something magical that happens when you see a family moving into their very first home," she said. "It is an honor to work with individuals and families; explaining the documents, networking with the multiple agencies and businesses it takes to complete a successful transaction, and finally, handing the new owners the keys."

Polly has fond memories of her time at KPC. "I loved the small town atmosphere, where students were not considered a number, but rather individuals. The instructors, many of whom are my friends still today, were so encouraging and so knowledgeable."

An Inupiaq Alaska Eskimo, Polly was a member of the Native American Honor Society during her time at KPC. At graduation, she received a red and black hand-beaded necklace. "I still have it hanging in my dressing room today and fondly remember my time at UAA when I look at it."

"The decisions we make in each Council meeting, the curriculum taught in each classroom, each teacher connecting with each student, and the level of community involvement that we all share, have a direct effect on our campuses, students and communities," Polly said. "KPC and UAA are training the leaders of today and tomorrow. It's exciting to be a part of something that has the ability to define a culture."

Polly gives more than her time to KPC. The Reasners' belief in education prompted them to establish a scholarship program to give back to students. "It's one small way we can contribute," said Polly. The Robert Reasner and Pollyanne Reasner Scholarship gives preference to students who want to stay in Alaska and make a difference in their community and state.

The scholarship's first two recipients were named last winter. "I will never forget the moment during commencement when our very first recipients were named. It is a thrill that I encourage every alumni to share in with me. It is truly a privilege to be able to give back in some small way."

Not only do the Reasners give back to their own community, they also reach across the globe to help others in need. The compassionate pair started a nonprofit organization called Starfishing, which seeks to rescue children from trafficking and exploitation. It's also involved in feeding orphans, providing dental care, and helping to build schools to educate the future leaders of the communities in which they work.

The Reasners make several trips to Asia each year, specifically Cambodia and Sri Lanka, to provide small grants to prostitutes or homeless people to help build their pride and get them off the streets. Their travels have also taken the pair to Russia and Mexico. "It can be as simple as giving a family a chicken so they can sell the eggs and make a profit," said Polly. "Or it could mean giving a woman a skein of yarn so she can knit something. It's great fun to be able to give back."