Raised as an Air Force child, Stephanie Wonchala grew up in several U.S. states and attended school in Germany. In 1993, the Air Force transferred her family to Alaska, but it wasn't until 2000 that she was finally able to call Alaska her home.

Choosing UAA was easy for Stephanie, especially after winning Miss Alaska and multiple other local pageants. "I had earned numerous tuition waivers that would have been unfortunate to pass up. I also like being close to my family and feel very tied to Alaska," said Stephanie.

Stephanie decided to go into Journalism and Public Communications (JPC) because she has a knack for writing and liked the idea of knowing the ins and outs of organizations' public relations. "I learned a lot about non-profits through my strategic communications courses with Professor Ron McGee. He provided me with a solid foundation in how to run a non-profit organization, writing press releases and the importance of networking," said Stephanie.

Professor Brian Jeffery from the Department of Theatre and Dance inspired and mentored Stephanie through her college career. Stephanie believes that if she had not experienced his passion for movement and his approach to creating, she would not be where she is today. "The courses I've taken in both Theatre and Dance and Journalism and Public Communications-two very different departments-merged in a beautiful way I never initially expected," said Stephanie. With the JPC skills and a minor in dance combined, Stephanie felt better prepared to own, operate and manage Alaska's newest modern dance company, Pulse. 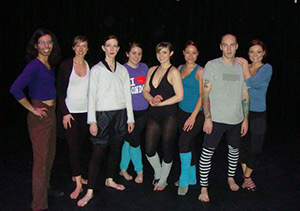 Pulse is now an emerging dance company that has performed at numerous venues around town and welcomed more than 300 people through their doors for its official Jan. 21 & 22, 2011 debut. She said that she can see people in the community are getting excited. "I've been told Pulse has brought something to Anchorage that our city doesn't have, but has been craving."

She gives credit to UAA for providing her and others with important building blocks. "UAA provided me with a blank canvas and paint, and I have made many colorful choices from there."

Stephanie believes that education depends on one's efforts. "Find something you're truly interested, talented in, or have a passion for, then tailor your education to it as best as you can," said Stephanie.