2011 Commencement a green and gold success 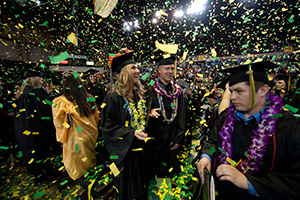 UAA celebrated the 2,270 graduates of the Class of 2011 at the Commencement Ceremony on Sunday, May 1. Fran Ulmer officially placed the Chancellor's Medallion on Tom Case at the celebration. UAA also honored a variety of community and University leaders for their contributions during the weekend of festivities.

"2011 Commencement a green and gold success" is licensed under a Creative Commons Attribution-NonCommercial 4.0 International License.