I AM UAA: Representative Lance Pruitt 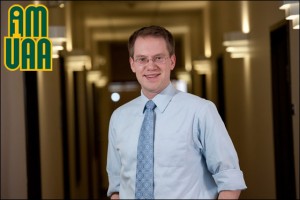 I AM UAA: Lance Pruitt

UAA grad Lance Pruitt found himself at a crossroads a few years after college. With four and a half years working in management at FedEx Ground and three at Sears Logistics, he was being faced periodically with offers of promotion that meant moving out of state. When he finally made it clear that he had no intention of leaving Alaska, he thought hard about how he could instead make an impact right in his own community. His decision: run for Alaska State Legislature.

"I'm a lifelong Alaskan," says Pruitt, now a house representative for District 25. "I plan on sticking around and raising my kids here, so I wanted to make sure that I'm involved and that my kids have the same opportunities, and more, that I've had."

Running for office isn't an unusual choice if you are a career politician or are retired and looking for the next challenge, or even if you're in the middle of your private sector career and want to make an impact at the state level. But for a history graduate just shy of 30 years old? And with no previous political background? A little unusual.

"I get that a lot," he laughs. "I am the youngest representative in the House right now by about four or five years. In fact, there are only four of us under the age of 40. I've really challenged the median age, but it's great for students at UAA to know that. Don't let 'em bring you down because you're young. You have the ability to get involved and it's a great way to bring our perspective to the table. I think it's another example, too, of an opportunity you can find in Alaska that you can't find other places where it might cost you, say, a million dollars in California for an assembly seat."

Still working for Sears when the Legislature is not in session, Rep. Pruitt is also a small business owner (Good 4 You Vending), husband and father of two young sons. He earned his M.B.A. in 2009 from Kaplan University through a tuition partnership at Sears, coaches his oldest son's soccer team and loves to ski. Traveling is also a passion of his, remembering fondly the months he spent traveling through Europe and India right after graduation in 2003. "The best foreign policy is a full passport," he says.

Managing his work/life balance between Anchorage and Juneau, he says, is one of the challenges he's faced so far in office. That and the learning curve of understanding the rules of order during legislative sessions and committee meetings.

"Thankfully, many of the other seasoned legislators have stepped up to helping us freshman," he says. "My family has been incredibly supportive, as well as my supervisors at Sears. I really came into the legislature as an open book. There are a lot of great people in office who really do want to see Alaska move forward. I see people who really do care about their districts; people who really care about Alaska."

Talking about who his greatest mentors have been so far, he quickly names the late Senator Ted Stevens and the late Commissioner of Commerce Bill Noll.

"I was on a plane coming back from a work trip," he remembers. "I was sitting in front of Senator Stevens and his wife. It was 2009 and at that point I had decided I wanted to run for office but, really, I had no clue how to do that. So after our flight landed, I took a moment to tell Senator Stevens that I was interested in running and ask him what I should do. So for about 20 minutes, he took the time to tell a young man whom he'd never met before how to get involved."

What Rep. Pruitt learned was that campaigning for office takes basic networking skills. He started making phone calls, rallied support in his longtime neighborhood of east Anchorage, and was eventually introduced to Bill Noll, chair of District 21 at the time, and "he started the prerequisite courses to my legislative master's, I guess you'd say."

The other part of the equation is learning what the issues are, and not just one side of any issue. "If you're going to discuss something," says Rep. Pruitt, "you better fully understand the full picture of what's going on. That's where the history degree kind of comes in: understanding where an issue came from and that helping inform how we can move forward."

As for his connections with UAA? "I'm surrounded," he laughs. "Chancellor Tom Case is my neighbor. So is Athletic Director Steve Cobb. But, truly, I think it's great what I'm seeing from the university. I've been involved a bit with the College Republicans club and it gives me the opportunity to see that there are some great kids going to school at UAA who are our future. They're going to be out there soon adding their knowledge and their skill set to the work force. I'd tell students to stay active, stay involved, be a part of the conversation."

"I AM UAA: Representative Lance Pruitt" is licensed under a Creative Commons Attribution-NonCommercial 4.0 International License.