I AM UAA: Kelly Howell

B.A. Justice, '92
Hometown: Fairbanks and Anchorage, AK
Fun Fact: Her father's work with the Troopers inspired her to pursue a career in justice 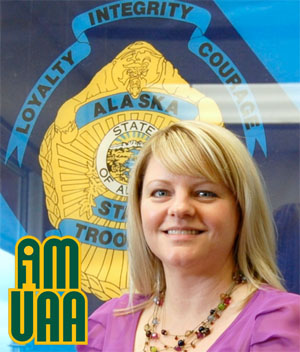 UAA graduate Kelly Howell smiles warmly as she talks about her tremendous personal satisfaction from her recent appointment as special assistant to Alaska Department of Public Safety (DPS) Commissioner Joe Masters. One of her major roles is as legislative liaison for DPS, which includes reviewing and drafting proposed legislation, evaluating and drafting regulations and meeting with members of the legislature. In addition, she serves as the liaison to the Governor's Office and will continue to be involved in the Governor's initiative to end the epidemic of sexual assault and domestic violence in Alaska. Prior to her DPS appointment, Kelly was the domestic violence and sexual assault services coordinator for the Alaska State Troopers and traveled statewide training first responders, working with victim services providers and assisting with policy development.

Kelly's work with DPS has given her a feeling of accomplishment at being able to help influence policy about vital issues. Her love of her job and the state is very apparent after only a moment's conversation with her. Kelly laughingly calls herself "a Trooper kid" and talks about the admiration and respect she has always had for her father and his work. Watching him inspired her to think about a job in justice.

Born in Fairbanks, Kelly has also lived in Nome and Anchorage. A graduate of East High School, she knew early on that she wanted to do something in justice administration. She majored in justice at UAA and minored in psychology, and one of her first jobs was with the Alaska Department of Health and Social Services. But in 2004, she heard of an opening with the Troopers in their Grants Administration department. She got the job, and soon after, was promoted to a criminal justice planner, and then to the sexual assault/domestic violence service coordinator position.

Public service is a strong tradition in Kelly's family. In addition to her father who is a retired Alaska State Trooper, Kelly's husband is in search and rescue with the Alaska Air National Guard. Her son is also in the Air National Guard, and her daughter is enrolled at UAA looking at a journalism career with an emphasis in environmental issues.

Whether through training or policy development, assisting law enforcement personnel to do their jobs better has always been Kelly's goal. She is especially sensitive to the unique issues facing Alaska, and the need for cross-cultural respect and understanding in dealing with people, as well as the issues.

"Each person's interaction with a member of law enforcement and public safety guides their perceptions of the criminal justice system," she says, and her concern is evident. Kelly wants, most of all, to help ensure those perceptions are positive and that Alaskans stay safe.

"I AM UAA: Kelly Howell" is licensed under a Creative Commons Attribution-NonCommercial 4.0 International License.