I AM UAA: Kim Stanford

Kim Stanford just might know the answer to your UAA question. And if she doesn't know, she knows who to call to get you the answer. That's what happens when you've worked for the university for some 21 years in more than half a dozen departments and served on countless (read: significantly more than a dozen) committees. She has even been President Stanford, serving four years in the position for UAA Assembly and five years as president for UAA Classified Council. Oh, and she's also an alum. 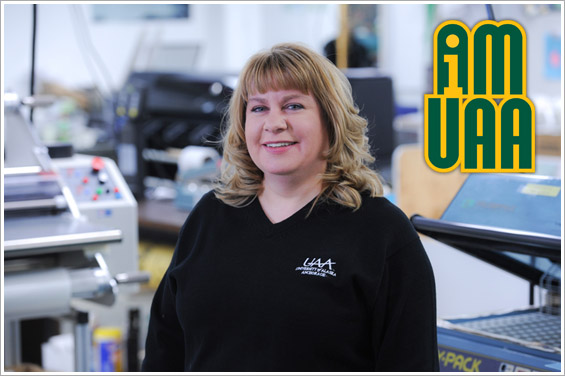 If you need to find this gold mine of UAA knowledge and experience, she's in the basement-the UAA Campus Bookstore basement, that is, where she has recently taken the helm as director of General Support Services. She's the smiling blond woman with the sizable candy jar in her office.

So what's the key to Kim's upward rise and longevity? Old-fashioned persistence. When asked how she was able to juggle full-time work with her own demanding academic schedule Kim says, "I have actually been taking classes here at UAA for a looooong time. My friends and family tease me about being a perpetual student."

Before she moved into her new position with GSS, she spent nine years as the administrative assistant for the Department of Theatre and Dance, and credits the faculty there with allowing her the flexibility to rearrange her schedule as needed. "They were all so supportive. It was never an inconvenience for them," she says. "They were very proud of me when I finished my degree. Or maybe they were just glad I was done!" She laughs that now she's moved over to GSS, they all miss her candy jar, which she kept religiously stocked with tasty treats. She's not naming names, but more than one faculty member quickly followed congratulating her on her promotion with, "You're leaving the candy jar, right?" It turns out it's a package deal, though, and candy-seekers know to pay her a visit in her new office.

A long-term UAA employee and a lifetime Alaskan who has lived in Anchorage since the age of 2, Kim did try to make a break for it right after she graduated from East High School. She admits that she had the typical 18-year-old's urge to get out of town for a while. She went off to University of Oregon, but still spent summers at home temping for UAA. Not always the serious student she would later become, Kim didn't stay to get her degree at U of O. "I definitely didn't appreciate higher education like I should have at the time," she says. Instead, she returned to Anchorage and temp work at UAA. Like so many other born-and-raised Alaskans who go the same route, she told herself, "I'm just going to go back to Alaska for a few years, but I'm not going to stay." And then she didn't leave. Alaska and love and life all worked together to keep her here. Temp work turned into full-time, regular work with Distance Education and that, with a few stops along the way, led to her current position with GSS.

While February isn't the best time to ask someone why they love Alaska, "This is the time of year when everyone thinks about living somewhere else," she says, but she says the big city attractions and small town atmosphere of Anchorage are a good fit for her. She jokes, "Olive Garden is opening up-I can't leave now!"

Outside of work and school, Kim and her partner of 16 years, Rayce, have just taken on a new challenge. They foster dogs for Alaska Dog and Puppy Rescue and Golden Retriever Rescue. That means they open their home, which has already been claimed in part by the two dogs and two cats pictured in the photos along the back wall of Kim's office, to dogs in need of care, socialization and training while they wait for the perfect permanent home. They've recently welcomed their second foster dog, Koko, an adorable Husky. Kim sighs and says, "We think she might end up being a foster failure." That means she'll have a permanent place in their home as dog number three, and she'll have a permanent place in the photo collage on Kim's office wall. "She's not a snuggly, gentle puppy, but we like challenges in our house."

Kim does have another new challenge at work, too. As the director of GSS, she oversees Central Receiving, Mail Services, Surplus and Copy and Print Services. In addition to the talented and loyal GSS staff that work for Kim, there's a lot of fancy equipment down in that bookstore basement. The GSS staff appreciates that Kim takes care of all the number crunching and administration, but they have also decided it's time for Kim to learn how some of the fancy equipment works, so they've been schooling her on the digital production machines. But they should be careful. Once she starts learning, she can't seem to stop. Despite accepting her hard-earned B.B.A. degree last spring and starting in her new position with GSS last fall, Kim isn't content to rest on her laurels. Almost as an aside, she says, "I just put in my application for [UAA's] M.B.A. program. I'll probably start classes in the fall."

"I AM UAA: Kim Stanford" is licensed under a Creative Commons Attribution-NonCommercial 4.0 International License.