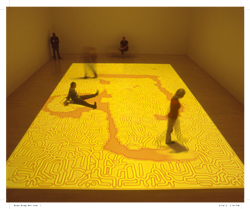 Brian Knep works with cutting-edge science and technology. As the artist-in-residence at Harvard Medical School, he works side-by-side with scientists, using their tools and techniques to explore alternative ways of connecting to the world. Knep's recent work focuses on the complexity possible with very simple rules--emergent art arising from mathematical equations of biological and chemical models of molecular interactions. His interactive installations amplify them and make them visible and accessible.

Knep holds a bachelor's degree in mathematics and computer science and a master's degree in computer science, both from Brown University. Early in his career he worked as a senior software engineer at Industrial Light and Magic, on films such as Jurassic Park, Mission Impossible and Star Trek: Generations. While there, he developed tools for which he and three others were awarded technical Academy Awards. His publications have appeared in computer graphics and computer-human interaction journals.

The Evolution of Complex Systems 2012 Spring Lecture Series is co-sponsored by Undergraduate Research, College of Arts and Sciences and the UAA Honors College.