NASA research scientist, Christopher P. McKay, talks about "Search for Life in the Solar System" during free lecture at UAA

How many times have we heard a version of the question "Is there life somewhere out there?" Hollywood has spent millions of dollars making movies and television programs exploring this question. Let's face it, we're curious. On Wednesday, April 4 at 7 p.m. in UAA's ConocoPhillips Integrated Science Building room 120, Christopher P. McKay will give a free lecture that will address this issue from a NASA research scientist's point of view. 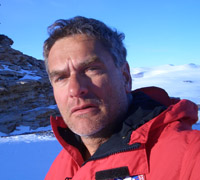 McKay's talk, "Search for Life in the Solar System," addresses the fundamental question of life in the Universe. McKay argues that an organism would be alien if, and only if, it did not link to our tree of life. In our Solar System, the worlds of interest for a search for life are Mars, Europa, Enceladus and, for biochemistry based on a liquid other than water, Titan. The discovery of alien life, if alive or revivable, will pose fundamentally new questions in environmental ethics. McKay believes that we would do well, ethically and scientifically, to strive to support any alien life discovered as part of an overall commitment to enhancing the richness and diversity of life in the Universe.

Christopher P. McKay received his Ph.D. in Astro-Geophysics from the University of Colorado and is a research scientist with the NASA Ames Research Center studying planetary atmospheres, astrobiology and terraforming and terrestrial analogs as vehicles to understand ecosystem sustainability. McKay has done extensive research on planetary atmospheres, particularly the atmospheres of Titan and Mars, and on the origin and evolution of life. He is a co-investigator on the Huygens probe, the Mars Phoenix lander and the Mars Science Laboratory. He has also performed field research on extremophiles, in such locations as Death Valley, the Atacama Desert, Axel Heiberg Island and ice-covered lakes in Antarctica. Chris McKay's current research focuses on the evolution of the solar system and the origin of life. He's also actively involved in planning for future Mars missions, including human settlements, and has conducted polar research since 1980, traveling to the Antarctic dry valleys and more recently to the Siberian and Canadian Arctic to conduct research in these Mars-like environments.

For additional information about this lecture, or to schedule a media interview, please contact Carol Brady in UAA's Department of Biological Sciences at (907) 786-4780.

"NASA research scientist, Christopher P. McKay, talks about "Search for Life in the Solar System" during free lecture at UAA" is licensed under a Creative Commons Attribution-NonCommercial 4.0 International License.