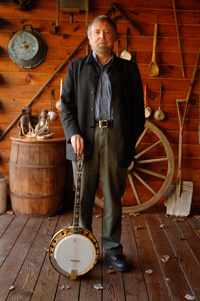 Equally qualified as a musician and anthropologist, Mick Moloney brings the perfect balance of historical insight and musical relevance to the songs he sings. Born in Ireland, Moloney came to America in 1973 to pursue a career that uniquely combines the roles of musician, folklorist, author, presenter, radio and television personality and educator. He holds a Ph.D. in folklore, and teaches at New York University in the Irish Studies program. Mick Moloney has been featured on Fresh Air with Terry Gross, in the Village Voice and in Irish Music Magazine. He has recorded and produced over forty albums of traditional music and acted as advisor for scores of festivals and concerts all over America. Mick also served as the artistic director for several major arts tours including The Green Fields of America, an ensemble of Irish musicians, singers and dancers that have toured across the United States on several occasions.

He has hosted three nationally syndicated series of folk music on American Public Television; was a consultant, performer and interviewee on the Irish Television special, "Bringing It All Back Home," a participant, consultant and music arranger of the PBS documentary film, "Out of Ireland," and a performer on the PBS special, "The Irish in America: Long Journey Home." In 1999 he was awarded the National Heritage Award from the National Endowment for the Arts--the highest official honor a traditional artist can receive in the United States.

"No one has succeeded more in taking this once vital part of Irish American culture out of musty archives and moldering dissertations and placing it afresh on CD and concert stage than Mick Moloney." - Earle Hitchner, The Irish Echo