I AM UAA: Lt. David Campbell 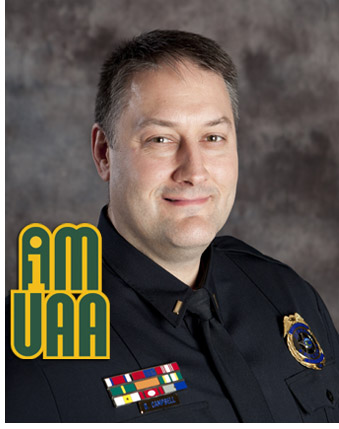 Back in the early 1990s, newspaper headlines were fixated on Rodney King and O.J. Simpson-two of the most renowned court cases of David Campbell's generation. In his early 20s at the time, David remembers how current events and an Introduction to Justice course finally piqued his interest enough to settle on a major.

"What gelled for me was that all the subject matter, whatever it was-justice of society or urban police problems-our instructors used current events to highlight and contextualize lessons," David explains. "It made me really think about how important police work was for society in general. That it takes a certain type of person to be a police officer. If I didn't make sacrifices to do this work because it's the right thing to do, then who would?"

He hadn't really considered going into law enforcement before then, but after the intro course, he was hooked. With plans of becoming either a police officer or a lawyer with his justice degree, David was sent on a ride-along with the Anchorage Police Department (APD) and those hooks dug deeper. His goals after college became either APD or FBI work.

"I really wanted to stay in Alaska," he says, "so after earning my B.A. I started applying to a lot of different police departments around the state." In early 1995, Juneau was hiring three cops on a grant from the federal government. There were 110 applicants. After two days of testing, David came out as the number one candidate. He began his career at the three-year grant position, again with plans that it would be a great stepping-stone to APD or the FBI. Seventeen years later, he's still in Juneau and loving every minute of it.

"Juneau has the same feeling as Fairbanks when I was growing up," David says. "It's a small town, people look out for each other. My wife and I just fell in love with this place."

Being selected two years into his career to be part of the Southeast Alaska Narcotic Enforcement Team also helped clinch the location for him. It was a choice assignment so early in one's career. Six years in he was promoted to sergeant. "I was getting great training and opportunities," he says. "I felt like JPD was a place that I could grow."

Earlier this year, Sgt. Campbell was promoted to the rank of lieutenant and is specifically responsible for all patrol activities at JPD as patrol lieutenant. He plays out his days as the public information officer, a polygraph examiner and one of two incident commanders for large events or disturbances. Balancing his time between the office and the field, David joins his officers on patrol at least once a week while leading the department in the various other administrative capacities.

"Every day is different here," he says. "It is such a dynamic job; it remains fresh and challenging. It is fun to come to work every day."

David's career is bookended by his education at UAA and the Department of Public Safety Academy in Sitka (1995) on one end and his current workload earning a master's degree in public administration from the University of Alaska Southeast (UAS), which he hopes to complete in 2013, on the other.

"You don't need a bachelor's degree to work as a police officer," David explains, "but having that college education has definitely helped me." The top five candidates from the original JPD job posting in 1995 and the top three graduates of his class (he was one) at the academy in Sitka all had college degrees. "The ability to learn to communicate effectively, to prioritize and organize-so many skill sets from college readily transferred to skill sets needed to be an officer. Education helps people be more successful in the application of their careers."

A clear proponent of learning, he says his mother stressed to him his entire life the importance of a college education. And it's a value he's passed on to his two sons. His oldest starts college in Minnesota in the fall, and his youngest wants to go to UAS and then on to either UAA or UAF.

Ironically, his very first semester at UAA so many years ago he was academically dismissed for poor grades. "It was a wake up call. I wasn't focused," he says. When he came back after bolstering his grades at Anchorage Community College, he took classes out of interest before declaring a major-teetering between art and photography one semester and math and science the next. The justice program, for David, was the perfect mix of engaging professors, contextualized learning and a variety of skill sets needed for the field.

And as the Rodney King riots and the O.J. trial settled into history, David embarked on his chosen vocation, ready to take on the world.

"I was pleasantly surprised [once I started as an officer] that the other people working in law enforcement were very high caliber," he says. "I am privileged to be part of this group. I started with a social worker crusader mentality, but I quickly learned that they were all here for the right reasons as well."

"I AM UAA: Lt. David Campbell" is licensed under a Creative Commons Attribution-NonCommercial 4.0 International License.