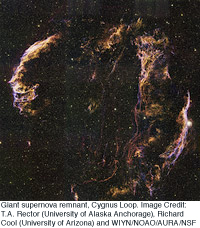 The National Optical Astronomy Observatory (NOAO) and WIYN recently published this new wide-field image of the Cygnus Loop, produced in part by Travis Rector, professor in the Physics/Astronomy Department at UAA. Three degrees on a side, this image covers an area of the sky about 45 times that of the full moon. But it does so without sacrificing high resolution. The image is over 600 million pixels in size, making it one of the largest astronomical images ever made.

The observations were originally obtained in 2003 by Richard Cool, while he was a graduate student at the University of Arizona, as part of a project to precisely measure the distance to the Cygnus Loop. Dr. Cool, now at the MMT Observatory in Arizona, said, "Often, astronomical research reduces images to dry tables of numerical information that we analyze in order to more deeply understand our universe. Images like this are amazing because they can remind you of the big picture and beauty that surrounds us." In 2003, the computing power available was insufficient to process the data into a single, full-resolution color image. Nine years later, Rector re-reduced and processed the data to create this awesome image.

This photo is the latest in a remarkable series of color images Rector has produced from NOAO telescopes. Earlier images can be found at his website and on a dedicated NOAO image gallery page.

For more information on the Cygnus Loop and all the technical details behind the photograph, visit the NOAO website.

"UAA professor helps produce one of the largest astronomical images ever made" is licensed under a Creative Commons Attribution-NonCommercial 4.0 International License.