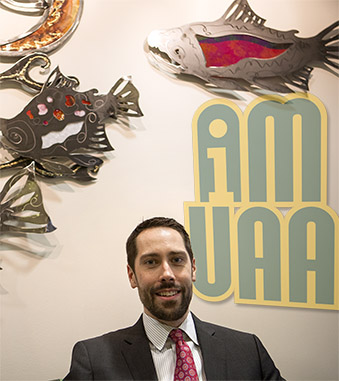 B.B.A. Accounting '02
Hometown: Anchorage, Alaska
Fun Fact: Has worked in the same CPA office as his father for a little over four years (cumulatively).

Josh McIntyre, B.B.A. Accounting '02, is quietly doing his part to support the future of the State of Alaska. From the sixth floor of the Mikunda, Cottrell & Co.'s office building on the corner of 36th and C St. in Anchorage, he has worked his way from an internship in college to a tax senior manager, which is only one step away from becoming one of the firm's partners. His career has spanned over 12 years, but he never forgets to give a little back to his alma mater.

"I think that UAA is a really important part of the community," he says. "Having a good university and a good university system is really critical to being able to develop the resources that Alaska has. I feel like I'm investing in the future of the state by getting involved at the level that I have."

Josh has always donated a little money to UAA since he graduated, but in more recent years, as his career has taken off, he has been able to increase his support to the College of Fellows level ($1,000+). Maybe even more important, though, is the time he takes to reach out to the younger generation and participate in recruitment to UAA's accounting program. For a while now, he's been visiting high schools and middle schools with College of Business and Public Policy Associate Dean Lynn Koshiyama to present to the students the benefits of considering a career in accounting.

"For students wanting to go to college, I think UAA is a great place. I've done really well, personally, because of UAA," says Josh. "For employers, UAA is also a great resource."

In fact, Mikunda, Cottrell & Co. boasts a high percentage of UAA grads in their workforce and leadership. "I always encourage our firm to promote hiring UAA graduates," he says, noting that they always participate in recruiting events on campus through the Accounting Club and during Accounting Week.

Off campus, Josh is a member of the American Institute of Certified Public Accountants and the Alaska Society of Certified Public Accountants, where on the latter he also serves as a director on the board and chairs the society's committee for financial literacy. "I also have helped to encourage the idea of utilizing the Alaska Education Tax Credit among corporations paying Alaska tax," he says.

Since his father is an accountant (also at Mikunda, Cottrell & Co. currently) and an adjunct professor, Josh was exposed to the financial field all his life-so it was a great fit for him academically. And UAA was a great fit for his pocketbook. Starting his college career at Colorado State, he quickly realized how expensive it was to go to school outside of Alaska. Having a girlfriend in Anchorage at the time didn't hurt, either, in making the decision to come back home and transfer to UAA. Now he's happily married with two kids and loves spending time outdoors and traveling with his family.