Philosophy research: Professor Terry Kelly and 'When is a promise broken?' 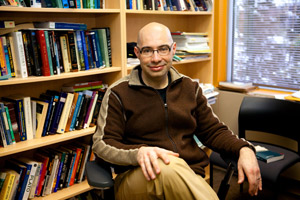 Think of the classic "elevator pitch": You've got two minutes between floors to sell your idea and hook a client.

More than 20 college professors took that challenge at an event called "Rapid Fire: Research and Creative and Scholarly Work at UAA."  Their aim was two-fold: Connect with some curious undergraduates who'd like to get involved in research, or entice other faculty to collaborate.

Terry Kelly is an ethicist in the philosophy department with the demeanor of a stand-up comic. "And you might ask," he said as he took the stage, "what kind of research does a philosopher do? It's not that different from the stereotype.

Laughter bubbled up in the lunchtime cafeteria crowd. But then he launched right into an ethical dilemma and invited his audience to choose sides.

"Suppose a husband, Abelard, promises sexual fidelity to his wife, Heloise, but then spends Friday evenings at a motel with prostitutes, reading Aristotle's 'Posterior Analytics.'

"Heloise accuses him of violating his promise of fidelity but Abelard responds that he does not engage in sexual acts with the prostitutes, so he has not violated his promise. What do you think?"

He jostles his audience for a raise of hands-who's with Abelard, who's with Heloise? Response is mixed.

"Well, I can say as a married man, for the unmarried students in the room, this is actually NOT a good defense, this is NOT going to work. Whether it is ethically sound will be irrelevant."  More laughter.

Next comes the why, the nexus of his current research.

"A promise is an offer to persuade someone that you can be trusted to do something. Abelard has an obligation not to cheat on Heloise, not to engage in sexual acts with prostitutes, for sure.

"What I am arguing is there is a second obligation. If I say, "Trust me on this," I am obligated to offer up good reasons for why you should believe me. One way we do that is through trustworthy behavior."

Back to Abelard.  "What he's saying is, 'Continue to trust me that I won't cheat on you even though I act in ways that give you every reason to think that I will.' That is really asking Heloise to be irrational."

National and local news coverage has no shortage of events that pose Abelard vs. Heloise-type questions:

We already know how the Bill Clinton scenario unfolded. But what does philosopher Kelly say about $20 taxi rides paid for by lobbyists? Or whether doctors should take gifts from pharmaceutical companies.

No-brainers for Kelly. Gift-giving to any professional who has made a pledge to serve the best interests of a patient, a student or a citizen is out of the question.

"A lot of psychological literature finds that gifts create reciprocal relationships. Even small gifts, like notepads and pens, create a positive impression of the giver to the receiver."

But often the gifts aren't small. A paper he plans to publish soon in an ethics journal reports that in 2003, pharmaceutical manufacturers spent $5.8 billion on detailing (explaining how a drug works) and $16 billion in free samples.

For three years and through two mayors, Kelly has sat on the Municipality's Board of Ethics. Some of the board's recent cases have focused on expensive gifts to schoolteachers at Christmas time.

Disclosing gifts is no solution, either. "A person may swear in their 'heart of hearts' that they remain independent and free of any bias," says Kelly. "And they may." But how is a reasonable person to know?

It comes down to trust, and trustworthy behavior is persuasive behavior.

Regardless of what was going on in Abelard's heart of hearts, his behavior toward Heloise was unethical because it was untrustworthy.

Anything less, Kelly says, and, "I am treating you like an idiot."

"Philosophy research: Professor Terry Kelly and 'When is a promise broken?'" is licensed under a Creative Commons Attribution-NonCommercial 4.0 International License.