Data show Mountain View is most diverse neighborhood in America 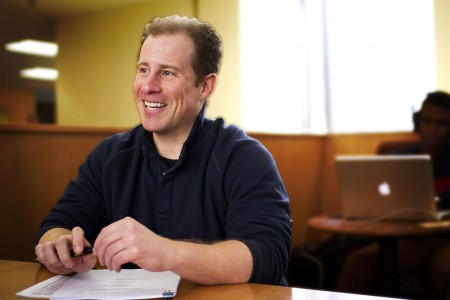 A version of this story by Kathleen McCoy appeared in the Anchorage Daily News on April 6.

You'd have to be a recluse not to notice the diversity of Anchorage. Evidence abounds, from new African and Asian restaurants, to community gardens growing greens from across the globe, to the oft-cited statistic that the Anchorage School District hears 90 different languages in its classrooms.

But none of that is enough for a demographer. Anecdotes are telling, but they lack detail. What are the nuances of Anchorage's diversity? How do we compare to our metropolitan counterparts in the Lower 48?

Chad Farrell is working on it. A demographer and sociology professor at UAA, he and colleagues from Penn State have been sifting through U.S. Census data covering the 30 years between 1980 through 2010, working with the ethnic-race "mashups" that are the census categories.

Here's one fact for your next cocktail party or water cooler chat: As of 2010, Anchorage's Mountain View neighborhood is the most diverse census tract in the entire U.S. In fact, three of the top 10 most diverse are in Anchorage, followed mostly by a handful from the borough of Queens in New York.

"I certainly knew Mountain View would be up there," Farrell said. "But I was surprised to find out it was number one." 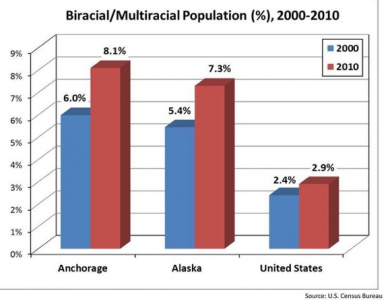 Using a diversity index, he and his colleagues measured the mix in different-sized communities across the United States, from metropolitan areas to small towns to counties, even to census tracts.

What is a diversity index? Scary mathematics. What you need to know is it takes into account all different groups in a given geographic area, plus the size of that group relative to the whole. That's an important point, and you'll see why in a minute.

Based on the index, Anchorage Census Tract 6 (Mountain View) scores 96.3 out of a possible 100 in its diversity. The other two top census tracts in Anchorage, Tract 9.01 and Tract 8.01, are roughly northeast neighborhoods -- bounded by Ingra Street on the west, Boniface Parkway on the east, Debarr Road on the south, and Glenn Highway on the north.

A chief reason why Mountain View ranks as so diverse may not seem intuitive at first. Yes, people from around the world live there, but it scores so high because such a significant percentage of whites also live there.

"A key thing to remember is that white people contribute to the diversity of a neighborhood," Farrell said. Many other high-diversity tracts in the U.S. lack a white presence.

Alaska's other natural diversity driver is the relative size of its Alaska Native population, sending it to the front of the demographic charts over and over.

Taking diversity analysis to the neighborhood level is more revealing than looking at it citywide, Farrell explains. A community may have all the various ethnic groups living within it, but if they don't share neighborhoods, the community is far less diverse than it looks at first glance.

Farrell and his Penn State colleagues are busy polishing their national findings for a chapter in a forthcoming social sciences book to be published by the Russell Sage Foundation. Based on our recent national election results and ongoing immigration debates, understanding diversity is a hot topic.

Farrell is also writing an Anchorage-focused paper based on his diversity index findings and looking for the right place to publish it.

"I like letting my colleagues in the Lower 48 know that there is quite a bit going on up here and I have the numbers to prove it," said Farrell, who moved here in 2005 with his career Air Force wife. "We are often overlooked in large studies and in academic circles."

Here's a few more ways Farrell has found for us to ponder our diversity.

As a city, Anchorage ranks 30th out of 366 metropolitan areas, easily in the top 90 percent. One reason we rate that high is because we are the number two city in the nation, second only to Honolulu, in our biracial/multiracial population percentages.

When I asked Farrell why we have these numbers, he explained that Anchorage has five of the seven characteristics that are associated with great community diversity. We are a coastal border state. We have lots of renters. Military bases bring diversity, as does our youthful population. The only two we're missing are large population size and the numbers to qualify us as an "immigrant gateway community." We're the next closest thing though, an "immigrant outpost," meaning we have more immigrants than many other places.

Farrell and his colleagues plan to look at changes in class diversity next. Repeatedly over the past 50 years, research has shown that for segregation, race has always trumped class. That may be eclipsed by a new trend: the increasing residential separation of income groups regardless of race.

"I am being very tentative about our research right now," Farrell said, "but we're starting to see evidence that income-based segregation in cities is moving up, while trends for racial segregation and inequality are moving down."

"Data show Mountain View is most diverse neighborhood in America" is licensed under a Creative Commons Attribution-NonCommercial 4.0 International License.