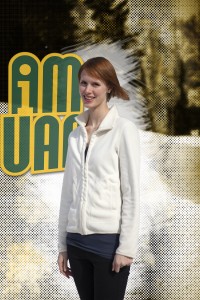 UAA senior Kelsey Waldorf is busy putting the final touches on her speech as she prepares to take the podium as student speaker at this weekend's commencement ceremony.

Kelsey grew up in Homer, Alaska, where she was homeschooled since the seventh grade. When it came time to choose a college, Kelsey, like many young Alaskans, had the itch to get out of state. She applied to several schools Outside and was offered an $80,000 scholarship to Seattle University. But after learning about the UAA University Honors College and Forty-Ninth State Fellows program, her eyes were opened to the plentiful opportunities right here in her home state. Kelsey, a UA Scholar, chose to enroll at the University of Alaska Anchorage.

Kelsey has always taken her education very seriously. As a freshman, she set a goal for herself to graduate with a 4.0 GPA and she's on track to accomplish that goal. Ever since stepping foot on campus, Kelsey has sought out opportunities to enrich her education.

She joined the Seawolf Debate program as a freshman and has traveled the world as a competitive debater with the team. "Being involved with Seawolf Debate is literally an experience I could not get anywhere else," Kelsey says, noting the team's excellent coaches and award-winning status. She admits, though, that it's a big commitment. "It's basically a full-time job," she says, explaining the amount of hours it takes to practice and stay up on current events, not to mention the team's intense travel schedule. She recently debated in the 2013 World Universities Debating Championship in Berlin, Germany. "It was a nice culmination to my four years with the team and all the work I've poured into it," she says.

Kelsey, a justice major, has also worked as a student researcher on a project with the Alaska State Troopers and Anchorage Police Department, and is involved with the UAA TAPESTRY program, which trains and matches student mentors with students who have mental disabilities.

Over the past year, Kelsey has been working on a 60-page Honors College thesis on the privacy implications of domestic drone surveillance, a topic she became interested in through the debate program.

Kelsey has certainly kept her plate very full as a student, and she's grateful for the tremendous opportunities that UAA has afforded her. "I'm glad I came to UAA," Kelsey says. "Looking back, even if all the schools I originally applied to gave me full-ride scholarships, I would still choose UAA knowing what I know now. This university can provide so much to students."

She encourages others to get involved with the UAA community and to not wait for opportunities to come along, but to actively seek them out.

"I am leaving UAA feeling incredibly confident and secure in the education I've received," Kelsey says. "I'm graduating with a fantastic education-this is an excellent institution."

After accepting her diploma this spring, Kelsey plans to spend a year interning at a political office in the Lower 48 or teaching English in Vietnam before starting law school. Ultimately, she hopes to become a field agent for the Federal Bureau of Investigation.