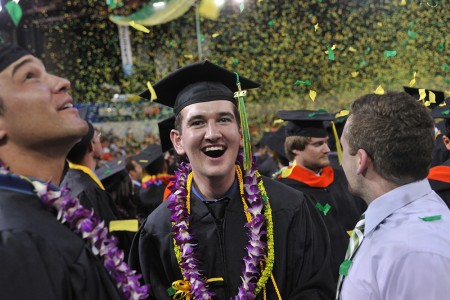 The University of Alaska Anchorage will celebrate the 2,315 graduates of the Class of 2013 (see the full 2013 Commencement Graduate List) at the annual commencement ceremony Sunday, May 5, at 3 p.m. at the Sullivan Arena.

A special Graduate Degree Hooding Ceremony will honor graduate students receiving their hoods on Saturday, May 4, at 10 a.m. in the Wendy Williamson Auditorium on UAA's campus.

Commencement is UAA's capstone event celebrating the achievements of its students and the lifetime achievements of extraordinary faculty and community members. UAA will confer degrees on students from the following schools and colleges: Colleges of Arts and Sciences, Business and Public Policy, Health, Education, the Community and Technical College and the School of Engineering. In all, UAA will confer 55 certificates, 586 associate degrees, 1,345 baccalaureate degrees, three post-baccalaureates, 64 graduate certificates, 366 master's degrees and two doctoral degrees. The 2,315 graduates* of the Class of 2013 will earn a total of 2,421 degrees or certificates.

This year's student speaker is Kelsey Waldorf, a member of the University Honors College and the Forty-Ninth State Fellows program. She has worked as a student researcher with the Alaska State Troopers and Anchorage Police Department, and is a mentor with the UAA TAPESTRY program, which matches student mentors with students who have mental disabilities. Kelsey will earn a Bachelor of Arts degree in justice with minors in political science and communications. After graduating, Kelsey plans to spend a year interning at a political office in the Lower 48 or teaching English in Vietnam before starting law school. Ultimately, she hopes to become a field agent for the FBI.

Many years of outstanding service to the university and its students will be gratefully recognized with the conferring of emeriti status on two members of UAA's faculty: M. Hilary Davies, Professor Emerita of Mathematics; Michael T. Turner, Professor Emeritus of Counseling.

UAA will also honor Jane Angvik, Carol Swartz, David Wight and Pat Wolf with Meritorious Service Awards at a reception on Saturday, May 4.

GCI will broadcast the commencement ceremony on cable Channel 1.