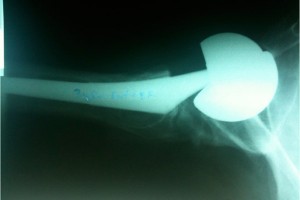 When Anchorage orthopedic surgeon Stephen Tower needed an artificial hip in 2006 to maintain his passion for recreational bicycling, he decided on one marketed to active younger patients, the metal-on-metal A.S.R. from DePuy Orthopedics, an arm of Johnson & Johnson.

The results were disastrous. By 2007 he had hip pain, balance issues that led to bike crashes, and a blood cobalt level 100 times higher than normal. (A.S.R. hips have a ball and socket made from chrome cobalt.)

Within 18 months, Tower developed ringing in his ears, sleep apnea, mild deafness and a mood disorder. By the end of 2009, his cobalt levels had peaked at 300 times normal and he began losing vision; the hip had to go. Once the A.S.R. was replaced with a ceramic-on-plastic model, his cobalt levels returned to normal and his neurologic symptoms disappeared.

Tower's experience was not unique. By mid-2010, Johnson & Johnson recalled the A.S.R. they'd released to the market in 2003. Another manufacturer, Stryker, voluntarily recalled its Rejuvenate hip stems in July 2012 after corrosion developed at key metal junctures.

In January, the Federal Drug Administration (FDA) ordered all five manufacturers of metal-on-metal hips to develop surveillance plans for patients with the devices, monitoring for soft tissue damage near the implant, blood cobalt levels and any new mood, cognitive, neurologic or cardiac problems.

In March, a Los Angeles jury awarded a retired Montana prison guard $8.3 million in damages, the first of more than 10,000 lawsuits Johnson & Johnson faces over the devices. Barry Meier of The New York Times reported that internal documents released at trial reveal the company's own 2011 studies estimated 40 percent of the hips would fail within five years. This contrasts with the 15-year life span for more traditional artificial hips.

The fix will be expensive. About 93,000 A.S.R. hips are in use around the world, one-third of them in the United States. An estimated one million metal-on-metal hips are in use globally. Now, even patients with the more common metal-on-plastic hips are reporting corrosion problems.

What a disaster, right? But if good can come from bad, Tower is determined to make it happen.

Toward solutions This spring, Tower reached out to UAA with several proposals in mind. He connected with the dean of the WWAMI medical program and two philosophy professors to suggest: •    creating an Alaska registry for all patients with artificial joints, and •    launching an ethics discussion on how use of metal-on-metal hips spread so quickly and eluded scrutiny for so long.

Australia and Great Britain have joint registries like the one Tower wants. The United States has trauma, tumor and heart registries, but not one for joints. Tower thinks a smaller registry of Alaskans with artificial hips installed and/or removed would be much faster to create than a national version, more nimble to operate and analyze, and a good predictor of universal experience. 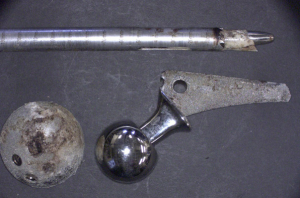 Examples of hip replacement hardware. All metal-on-metal hip replacements must be monitored carefully according to the FDA, due to high levels of cobalt resulting from friction in the replacement joint.

WWAMI dean Jane Shelby says she was immediately interested in Tower's registry  idea. She arrived at UAA in July 2012 with a deep background in medical education from WWAMI programs at the universities of Montana and Washington state. Before that, she was a professor of surgery at the University of Utah.

"The registry would be a good collaboration between investigators at UAA and the medical community in the UMed District," Shelby said. "The registry, and other aspects of the failed hip implants, have the potential to provide research opportunities for UAA and WWAMI students."

Tower's second idea for improving the state of hip replacements in the U.S. is to allow for easier exposure of the problems. Back in 2010 when he began trying to share his A.R.S. disaster at medical conferences and in medical journals, he says he was shut out.

Ethical conflicts That experience is detailed and analyzed in a paper he co-authored with UAA philosophy professors Stephanie Bauer and Terrence Kelly, both members of UAA's Alaska Ethics Center. Their paper was titled "Will the Real Expert Please Stand Up! Power, Credibility and Expertise in Medical Discourse" and posted in May on the Philosophy of Science Archive at the University of Pittsburgh.

The paper describes Tower's inability to find a professional audience for his hip replacement nightmare. The main reason, they argue? Because the orthopedic surgeons who are paid by companies to develop biomedical devices are also the journal editors and conference organizers who rejected his papers and panel suggestions. Even the FDA rejected his information because he'd never served as an industry consultant; they didn't consider him a qualified expert.

Tower's registry idea takes this conflict into account. He imagines a transparent database equally accessible for study and posting by surgeons, researchers, biomedical companies and even patients. If a doctor suggests a hip replacement and names a particular model, the patient could look it up on the database and find out what others report.