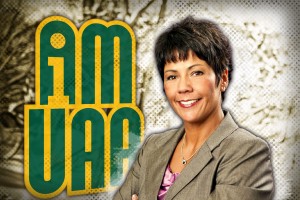 *Update 9/11/13 - Sophie has been honored with the UAA Alumni Association 2013 Alumni of Achievement Award.

At Cook Inlet Region, Inc.'s (CIRI) headquarters in midtown Anchorage is the beautiful and spacious office of Sophie Minich, president and CEO of one of Alaska's biggest native corporations. She took the helm in January of this year, after Margaret Brown, CIRI's president and CEO for eight years, retired. But the petite and stylish Sophie is not daunted by the shoes she has to fill as she takes on her new role. In fact, she is able to say what most people only dream of saying when referencing their work.

"I love my job," Sophie says smiling. "I tell everybody that. I love what I do and I love whom I do it for. I go home at the end of the day and I'm energized, ready to come back the next day and that's because of the people."

It's easy to see the 20-year veteran of CIRI is passionate about her work, the people she works with and the company and its shareholders she works hard for. Sophie began her career with CIRI as a project accountant soon after she graduated from UAA's business and finance program. Throughout her 20-year career at CIRI, Sophie worked in almost every division of the company and was encouraged by her mentor and friend Carl Marrs, CIRI's president and CEO from1996-2004, who advised her to take hold of the opportunities presented to her in life.

"I learned that this was a company full of tremendous opportunity," Sophie says. "And here I am, 20 years later in the seat that two of my mentors used to sit in. Hopefully I too can inspire others to take hold of those opportunities and find the next leaders." 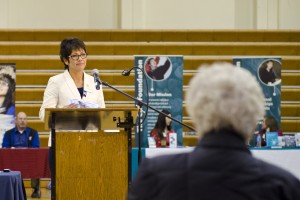 Sophie's list of accomplishments is long and like most leaders in the community, her days are filled with meetings, making sure the wheels of her company turn smoothly, volunteering on numerous profit and nonprofit boards, and on top of that, she's a busy mom. The modern-day superwoman balances it all with cool confidence, and knows her success is in part because of her education and the role models who provided a map of encouragement, mentorship and support along the way.

On education and dreams

"My dad was adamant that of everything in life that goes on, there's one thing in life that someone can't take away from you and that's your education," says Sophie. "He always encouraged me to go get my education." Sophie says her father really valued gaining an education beyond high school and he himself had attended college and earned his associates degree. Sophie's father had big dreams for his youngest daughter and hoped she would achieve great things in life, and knew that in order for her to accomplish her goals, she would need a college degree.

"I think he saw more opportunities for women in the world if they had a college education," Sophie said of her father's insistence of her attending college. "I was the first and I believe I am still the only sibling to graduate from college with a bachelor's degree. I had a lot of help along the way, but my dad really encouraged me to pursue that."

After graduating from high school, Sophie left her seaside hometown of Seward and headed south for Hawaii, having fallen in love with the island life and culture on family vacations, and attended a small private liberal arts college. But after taking general coursework for a few years, she realized she wanted to buckle down and get more focused on her education.

"I wanted to come out with a degree of some sort and was really leaning towards business," Sophie says. "I decided I didn't want to come out of school with a bunch of debt and moved home to Alaska and applied to UAA."

Once she made that decision, it was like a navigational beacon had been lit and she set her sights on a degree from the business administration program knowing she would focus her studies on accounting, but quickly realized accounting wasn't quite the right fit, and switched her degree to finance.

A head for numbers

"I'm a bit of a nut about math. I like math," says Sophie. "I like solving problems." But Sophie's love affair with math and crunching numbers started long before she set foot in the lecture halls of her UAA accounting and finance classes. It started years earlier at the dinner table with her "aunt," who's really one of her older sister's best friends. She and her husband helped raise Sophie and her youngest brother while their father worked shifts on the slope; their mother passed away when Sophie was 12. Sophie credits her as the one who inspired her lifelong love of arithmetic and taught her the value of numbers.

"One night she was sitting at the dining room table and I sat down with her, she was doing paperwork and I said, 'What are you doing?' She explained to me that she was volunteering and doing the billing for the Volunteer Ambulance Corp in Seward and asked me if I wanted to help-which I did," says Sophie her face lighting up recalling the memory. "It was a monumental moment in my life because it taught me about volunteerism, paying it forward. I mean she was busy, had a job, was raising my brother and I, and yet here she was, sitting down at night, still doing volunteer work."

That night was a game changer and foreshadowed the path Sophie's life would take and the degree she would pursue as a student at UAA. After returning to Alaska, Sophie dove into her classes at UAA fueled by her passion for crunching numbers. It was a bit of a rocky transition from the island breezes of Hawaii to the cool temperatures of the North, and UAA was a much smaller commuter campus back then. But in the midst of her classes she made a lifelong friend.

A friend in need

"I was in a statistics class and we'd just had a test two days before and everybody shows up and is checking their grades, I had scored pretty high on the test," Sophie says. "During class this lady comes up to me and says, 'You don't know me, but you're about to become my best friend,' and I was thinking 'what?' She told me I had scored the highest or second highest grade in the class."

As it turns out, Sophie's new best friend was struggling through their class and needed her expertise. They quickly became friends and to this day remain close. She credits that friendship for enriching her UAA experience.

Sophie also credits her UAA education for her career path from an entry-level project accounting position to her new role as president and CEO.

"When I first came out of school I worked in the accounting field, that's what I made my living off of and UAA absolutely prepared me for that. I learned a lot and applied everything I learned every single day in the accounting world," says Sophie. "All the other classes-the marketing, statistics, finance, economics-I don't know a day that goes by that I don't utilize something I was taught in those classes."

Sophie's road to success has been paved with hard work, dedication and a true passion for what she does. She has the tortoise and the hare philosophy, approaching her life and career as the tortoise-taking the time to carefully gain experience and learn from those around her.

"I was patient-I learned a lot in that," says Sophie thoughtfully. "I think people in this day and age like to go from A to Z so quickly and you miss a lot. You miss some good experience, expertise, advice and life lessons along the way."

From her father's encouragement to pursue her education and her "aunt's" wisdom, teaching her the value of hard work and volunteerism, to her UAA education and career at CIRI, Sophie's taken to heart the education she's received both inside and outside the classroom.