*Originally profiled in March 2012, Stephen was named the 2013 Alumni Emerging Leader by the UAA Alumni Association, so we checked back in with him for the updates below. 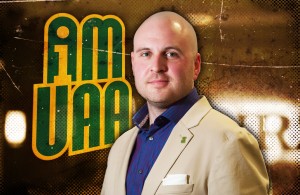 I AM UAA: Stephen Trimble

B.A. Interdisciplinary Studies '08 Hometown: Anchorage, AK Fun fact: He is the President of the oldest incorporated mining company in Alaska.

Stephen Trimble holds an impressive resume spanning many industries across the state from oil and gas to power and nonprofit work. The multi-tasking mining and power business leader took a left when others took a right, taking his education into his own hands, molding his degree to fit his career goals and aspirations.

"I've always done my own thing. I come from a very creative family-with an extensive background in creative ideas and professions-so I knew that creativity certainly had to be a part of whatever I chose to do," says Stephen of designing his own integrated geology and fine arts degree program.

Stephen is passionate about both science and art and he loves Alaska. Even as a young university student he was thinking of how he could create a degree program that would extend across numerous fields to help propel the state into a prosperous future.

"My driving initiative is finding ways to keep moving Alaska forward. What's so exciting to me about living in Alaska is that we have so much to do and we're a young state," Stephen says. "That level and opportunity for growth is exciting, so that's what I always had in the back of my mind, how do I set myself up to move that goal forward, to further develop Alaska and see it grow?"

Stephen's love of Alaska and his leadership abilities have not only been noticed in the Alaska business community but at UAA, and he was recently named the 2013 Alumni of Distinction Emerging Leader award. One of UAA's most prestigious awards, Alumni of Distinction recipients are nominated by their peers in the community and recognized at UAA's annual black tie event, the Green and Gold Gala in September. He'll share the stage with community leaders and notable UAA alumni, Cook Inlet Region Inc. (CIRI) president Sophie Minich (Alumni of Achievement) and Susan LaBelle (Alumni Humanitarian).

"I feel very honored. I very much want and strive to be a leader in the community and it's a great, humbling honor to be selected by my peers," Stephen says. "At the same time I fully recognize and appreciate the work of all the alumni. I think it's a vibrant and diverse group that has a lot to give back to Anchorage and Alaska."

Stephen began his collegiate journey at UAA in 1999, and is grateful he had the encouragement and insight of his professors to combine his talents in art and illustration with his passion for paleontology and geology. The outcome has been a solid foothold in a strong network of mining professionals, landing him his current role as a project manager and mining business lead for URS Corporation in Alaska.

Outside his advisory board involvement at UAA, Stephen is active with several other board appointments like the Alaska Minerals Commission, State of Alaska Emerging Energy Technology Fund Advisory Committee, The Alaska Arctic Policy Commission, the Nature Conservancy, and the Gold Cord Development Corporation. Those credentials you can find on his LinkedIn profile. What LinkedIn won't tell you is Stephen also founded the Geology Club at UAA when he was a student. Furthermore, his parents, Fred and Sue Trimble, are also alumni of UAA (mom in accounting and dad in computer science), and his dad works as a computer programmer for ConocoPhillips in the same building where Stephen's URS office is located.

Stephen also spends every May in the deserts of the U.S. Southwest, digging for fossils. So, when asked what he likes most about his current job at URS, he talks about the personal interactions he gets with clients and co-workers.

"Business development is very strategic," he says. "There is lots of planning and strategy, networking and communications; it's very human-interaction driven. Very different than working with rocks; that's what's appealing."

Coordinating across multiple disciplines, offices and regions within URS, Stephen puts his diverse skills to work every day.

"I think having the flexibility I had at UAA to craft my path has turned out to be very valuable in having an interdisciplinary career now," he says. "And my connections with UAA continue to be very beneficial in terms of being a part of something that's still growing as well as being a part of training the next generation of Alaskans, building our brain trust and investing in our future. It's all been both personally and professionally rewarding."

Although Stephen's professional successes, awards and accolades continue to grow, he remains humble, returning to the original goal he set for himself so many years ago-to propel the state he loves so much into a successful future. For current students and dreamers he has a simple sentiment.

"You don't have to be afraid to chart your own path."