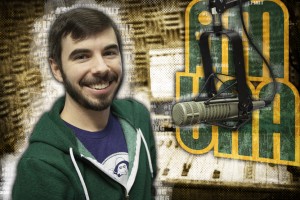 The first time J.R. Zufelt heard about the Arctic Entries storytelling series was when a friend said he would be sharing a tale about preparing salmon with his father.

"He did a practice run for me and it was hilarious," said Zufelt, a UAA alumnus and operations manager for Alaska Integrated Media. "Sadly, I didn't get to see him tell his story for the Arctic Entries audience, but now I was intrigued."

A few shows later, a friend of a friend was telling a story at Arctic Entries.

"A few of us headed to the Alaska Experience Theater in the 4th Avenue Market Place to support her and hear the others," Zufelt said. "It was entertaining and personal and seemed so natural."

"Outside of twiddling knobs on the audio console during the live shows, I sit on the Arctic Entries storyboard with 10 other dedicated volunteers," Zufelt said. "We each bring our individual talents together to steer the nonprofit, making sure the shows happen and that we stay true to our mission: Build community one story at a time."

Upcoming Arctic Entries story themes include: • Jan. 14, "I Got This: Stories of Persistence, Insistence and Grabbing the Bull by the Horns" • Feb. 4, "Experiments: Stories of Fiascos, Odd Couples and New Discoveries" • March 11, "Getaways: Stories of Going Undercover, Finding Paradise and Gettin' the Hell Outta Dodge" • April 8: "Seriously?!: Stories of Skepticism, Opportunity and Getting Blindsided" • May 20, "Go Big or Go Home: Stories of Risks, the Extra Mile and the Last Hurrah"

A man named Jason Slemons told a story that became one of Zufelt's favorite stories.

As a graduate student, Slemons was walking across campus when a stranger asked him to join the U.S. Paralympic soccer team. Not wanting to be rude, Slemons told the stranger thanks, but he didn't have a disability.

"This led to him finding he had actually been diagnosed with cerebral palsy as a child-something his parents never told him," Zufelt said. "Shortly thereafter, he was traveling around the world playing soccer at the international level, seeing life through a very different, albeit empowered, lens."

The nonprofit's storyboard of volunteers selects seven stories for each live event; performances are held at the Alaska Center for the Performing Arts.

Proceeds from the 2013-2014 season of Arctic Entries are being donated to the Alaska Literacy Program, a volunteer-based nonprofit that provides basic literacy instruction to adults in the Anchorage area.

"It's unpredictable, it's raw, it's fun, it's entertaining and it's often inspiring," Zufelt said. "At its base, Arctic Entries is a small part of a universal tradition that humankind has had since the beginning. Everyone can relate to what it's like to hear a story or to tell a story. Maybe that's even more relevant in Alaska, where there are many indigenous cultures, and such diverse cultures, that all share that strong oral component. I think some also enjoy the fact that we're able to give back to the community. Not just through the storytelling, but also through the donations to our nonprofit partners. It helps broaden all of our connections."

Zufelt's connection to Alaska first formed in 1988 when he moved with his father and two younger brothers from Placerville, Calif., to Soldotna.

"We were welcomed by a strong familial support system during a time of need," he said. "A messy divorce and alcoholism had taken a toll on my father and he was looking for a fresh start. My grandparents provided a stable environment for us to be able to make those changes."

By the time Zufelt was in high school, he had developed a strong interest in music.

"I didn't have much skill or interest in playing music," he said, "but I enjoyed listening to it, immersing myself in the experience of listening, and, like many before me, I noticed how music could change a situation-how it could add to or create a moment. And I wanted to share that."

During his senior year in high school, Zufelt volunteered for a community radio station, KWJG.

"I was granted two hours every Wednesday night," he said. "From 7-9 p.m., that low-power FM signal carried the sounds of alternative and punk rock out to the radios of a few thousand potential listeners, though my audience could probably be counted in the tens of people, at best. It didn't matter to me. The hook was set."

After a year of studying and volunteering at yet another radio station in Bozeman, Mont., Zufelt decided to move back to Alaska, study journalism and public communications (with an emphasis on broadcasting) at UAA and volunteer for KRUA.

"UAA was, by comparison, affordable, and had what I was looking for," he said. "I could pay in-state tuition and study an area of expertise where I wanted to make a career. Going to school out of state helped me burn through my scholarships and a small savings quickly. Plus-and how many times have you heard this story?-I missed Alaska. Yes, Montana has mountains and is a gorgeous state, but it's different in Alaska. Stepping off the plane in Anchorage at 10 p.m. in June and walking outside to see the sun setting on the Chugach Range put a huge smile on my face."

Having student-run media outlets on campus meant Zufelt not only studied in his field of interest, but also gained valuable experience through volunteering at and eventually being hired at KRUA 88.1 FM.

"My work experience at KRUA directly led to me landing my first job in the commercial radio market," he said. "The people with whom I attended classes and the people with whom I worked were great. I have many lasting friendships, personal and professional mentors, from my time at UAA."

Zufelt left UAA the spring of 2006 and began associate and live production of The Aaron Selbig Show for The Alaska Talk Radio Network.

"It was a live, call-in talk show focusing on local, state and national news, politics, interviews, current events and more," Zufelt said. "We were heard 4-6 p.m. weekdays on KUDO 1080 AM in Anchorage."

"It's inspiring to be side by side with folks willing to work through the challenges of being a mid-sized fish in the pond," Zufelt said, "always striving to be better while working with the resources we have, which, at times, are less than what they might want. We're making progress, continuing to grow, honing our craft."

The people who make Arctic Entries happen are honing their craft as well.

Zufelt says he has enjoyed that process, and savors the post-show highs.

"I've seen plenty of high fives, I've seen tears of happiness, new bonds have been created and old bonds strengthened or rekindled," he said. "It may not be that emotional for everyone, but I think that's a huge part of what drives people's interest in Arctic Entries. It's just a great, inviting atmosphere created by the simple sharing of human experience."