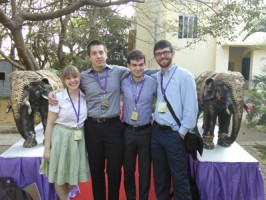 The UAA students-Matt Ostrander, Matt Fox, Matt Stinson and Sarah Elton-ended the competition in the top third of all competitors. They placed 18th and 24th out of the more than 100 teams from the U.S., beating out teams from Stanford, Duke and the University of Chicago.

The Seawolf Debate Program's influence at the World Championship extended beyond their competitive success. Steve Johnson completed his term as chair of the World Universities Debating Council, passing leadership of the executive body to a colleague from Canada. Seawolf alumnus Brett Frazer was announced as a member of the Chief Adjudication team for the 2015 World Universities Debating Championships in Kuala Lampur. The winning team for this year's World Championships was from Harvard University and featured Josh Zoffer, who visited Alaska last April to participate in the exhibition round on the Second Amendment.

The program now turns its attention to the Cabin Fever Debates, UAA's intramural debating tournament. Running from the end of January to the beginning of March, the tournament is open to UAA students not active on the competitive squad. The program will also soon announce plans for its spring exhibition debate and work on hosting the Alaska State High School Drama, Debate and Forensics Championships. For more information, contact Steve Johnson at (907) 786-4391.