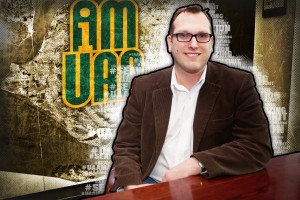 I AM UAA: Jon Bittner
Philip Hall/University of Alaska Anchorage

Jon Bittner is among a dozen Seawolves who earned a spot on this year's "Top Forty Under 40," the annual list of top young professionals from the Alaska Journal of Commerce. But when you meet Bittner, hear his contributions to Anchorage, and absorb his immense enthusiasm for his hometown, it's fairly surprising he hasn't received the top nod from the Alaska Journal before.

After a geology career in mineral exploration, Bittner made the switch to urban development and now serves as vice president of the Anchorage Economic Development Corporation, or AEDC. But Bittner's ideas and ambition can't be contained by just a job description. In recent years, he's co-founded an inventors group in Anchorage, held a spot on the Geology Advisory Board at UAA, brought Frisbee-throwing robots to the lawn of the library (more on that later), and worked tirelessly to expand opportunities for both businesses and residents in his favorite city in the world.

Bittner's deeply-rooted family tree has witnessed significant changes in the state. When his great-great-grandmother opened a dress shop in Nome in the mid-19th century, Alaska was a very different place. The gold rush may no longer provide a viable avenue for growth, but thankfully Bittner and the catalysts at AEDC have a few modern ideas to continue developing infrastructure and economy in the state.

As vice president, Bittner oversees a solid share of day-to-day operations at AEDC. "Fundamentally, we're trying to find ways outside of the more traditional areas of oil and gas development to make Alaska a little more economically stable," Bittner said of the organization's goals. That means supporting current industries, attracting new businesses and developing the immense potential he sees in his fellow Anchorage neighbors.

Bittner's focus, and clearly his passion, is fostering the future of tech innovation in Alaska. "What I love about Anchorage is you can literally do just about anything here, because we're such a young city and a young state," Bittner said. "Here, we attract dreamers, schemers, all sorts of people that dream big and can make it happen."

"Nowhere else could I have made this transition," he said of his move from mineral extraction to urban development. "As long as you have the ability and the passion to do it, you can make it happen."

Coming off a career in the mountains and mines, Bittner immediately launched into his first role at AEDC-Director of Business and Economic Development-and set out to cultivate the city's impressive DIY community.

While industries like mass manufacturing may not make the cut in Anchorage, the tech sector has enormous potential. "We're extremely creative and innovative," Bittner said of his 300,000 neighbors. "We have a really well-developed inventor population, but they don't necessarily have the tools they need to create a business.

Or, in other words, "we have a lot of back-of-the-napkin ideas, but not a lot of people who own 3-D printers."

To solve the problem, Bittner flew to San Francisco to research how innovation flourished in the creativity hub of the country. After knocking on dozens of doors, gathering information from anyone he could reach, Bittner flew home with a solid sense of his next big project-a designated space for creativity in Anchorage.

What started out as a few inventors discussing their projects over pizza has become the Anchorage Maker Space, a home for the innovation community. Thanks to the fundraising goals of 20 founding members, the group recently moved into a location off Spenard Road complete with printers, shop tools and private workspaces.

The Maker Space is just one of many projects taking off in Anchorage. Bittner's organized several 'hackathons,' which he humorously explained as "throwing programmers into a room with broad goals." Rather than focus on launching startups, the Anchorage hackathons encouraged projects with a civic focus and netted impressive results. A team of novice programmers created an app for identifying invasive plants (and advising on proper removal). A former Anchorage police officer even developed a system to summon a smartphone-wielding civilian search team in the wake of future Amber Alerts.

Aside from civic projects, hackathons also serve to market the city as a destination for programmers. "You're not going to be just a lonely coder out in the middle of a bunch of hunters," Bittner said. "There is a community here and they're very active." The Anchorage hackathons have since spread to Fairbanks and internally at ConocoPhillips.

Community is the clear theme connecting Bittner's diverse projects, and both he and the AEDC are committed to keeping residents active in their ongoing conversations. In fact, he's even given a city-wide presentation on the matter titled "Crowd Funding Alaska's Future." The presentation-a 20-minute rundown of the need for community buy-in on all of Alaska's potential-was endorsed, no less, by the international idea conference known as TED Talks.

"You don't see that kind of thing come out of a traditional economic development shop very often," Bittner admitted regarding his grassroots focus. The way he sees it, if enough people generate ideas, and enough people pay attention and encourage them, then the ideas gain authentic support and the city enjoys direct engagement from its citizens. It's crucial to keep the innovation engine chugging along in order to improve housing, education, safety, and, on a grand scale, the city's reputation nationwide. "Once you get all these things in order, economic development will flow from that," Bittner explained.

All this optimistic energy culminated in summer 2013 with Entrepreneurship Week, a celebration of local innovation anchored by the debut of its signature event-the Anchorage Mini Maker Faire.

A day at the Faire

Last summer, the Maker Faire brought over 1,200 people to the front lawn of the main library. The event was an official offshoot of the Maker Faire-a worldwide series billed as 'The Greatest Show (and Tell) on Earth!"-and showcased bright ideas from dozens of Alaskans. "[It's] a way to bring together the creators, the inventors and the innovators, and have them showcase all the crazy things they're doing," Bittner explained of the event's intent, "but also to teach young and old how to make it happen as well." Homegrown bicycles and underwater rovers were on display next to a cardboard Eiffel Tower. Dimond High School unveiled a Frisbee-throwing robot while a 12-year-old girl turned a profit selling homemade marshmallow guns. All in all, the crowds in attendance and the innovation on display marked the inaugural Maker Faire as a major success.

"Things like that are a small slice of why it's so fun to be in Anchorage right now," he said of the city's encouraging community. "There's so much possibility." Older cities are often set on their industrial paths, but a comparatively spry city like 99-year-old Anchorage has options. "Now we have to figure out what we're going to be when we grow up," Bittner joked of the city's bright future. "Anyone here gets a buy-in on that, which is really exciting."

Supporting the next set of Seawolves

With that in mind, Bittner shared some words of wisdom for current Seawolves and students statewide. "I'm not kidding, almost anything is possible here," he said. "The community here is so hungry to help young people in Anchorage and Alaska to A, stay here, and B, succeed here.

"What I love about being a UAA grad is that you have a chance to develop connections and you get that background of community that's harder to get if you're not from here. You get that leg up on the competition. A lot of what UAA does is put you together with mentors in the community," Bittner said. "It doesn't take long to build up a really powerful network here that, anywhere else, is not just difficult but probably impossible.

"Alaska is facing unprecedented changes, both economically and demographically. It's up to the new generation of Alaskans to create the Alaska that they want to live in," Bittner said, reflecting on his "Top Forty Under 40" award. "There has never been a better time to be under 40 in Alaska than right now."