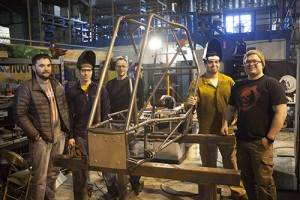 "I've invested nearly 50 hours on this," the UAA engineering student said of the gadgets-virtual versions of high-carbon steel parts destined for a single-seat dune buggy-like off-road vehicle he and others on UAA's Baja team are creating. "This part holds the caliper on. I'm trying to figure out how to bolt it onto the bearing carrier, here, which involves complicated cuts. We can do it, but it takes time."

Every second counts, now, because the finished Baja vehicle must be ready April 3 to be shipped to El Paso, Texas, for the Baja SAE competition-one of three SAE International Collegiate Design Series competitions scheduled this spring in the U.S.  The Baja showdown is scheduled for April 24-27 at the University of Texas at El Paso.

Teams from universities all over the world compete every year, testing their cars on outdoor tracks and challenges to see which Bajas are the fastest, strongest, most maneuverable, most innovative.

Corbin Rowe, UAA's machinist, isn't a member of the Baja team but he performs a crucial task: translating the students' SolidWorks renderings into steel and aluminum Baja parts using a manual mill, three-axis computer numeric control mill, lathe and other equipment housed in a machine shop a few steps away from the computer lab at UAA's University Lake Annex. 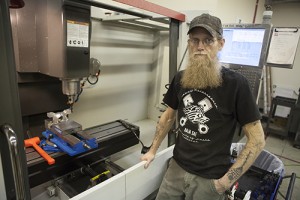 "We've been lucky to have a machinist on UAA's staff here for us to ask questions," Zachary said. "That's been 50 percent of my learning experience. In school, you spend so much time on computers, in virtual reality or crunching numbers. But you have to make sure you designed a part that's possible to machine, that it will work in the real world."

UAA has raced four times at previous Baja SAE annual competitions. This year's UAA Baja team has a $25,000 budget, which includes the cost of materials, labor, shipping of the Baja car and transporting the team to El Paso. Briggs & Stratton donates 10-horsepower, four-cycle, air-cooled stock engines to every Baja participant. The team buys complicated components that would take too much time to custom make, such as brake calipers, which must be specially machined to withstand pressures within and forces passing through them, and the CVT (Continuously Variable Transmission), which uses a complex system of springs and weights to transfer the engine's output power to the transaxle.

"These things are heavily engineered by outside companies and it's in our best interest to focus on custom engineering what we think we can get done in the limited amount of time we have," Zachary said. 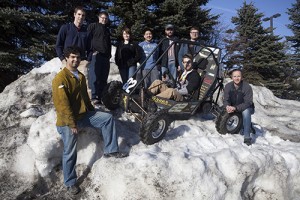 "We like to support student professional associations or projects where students get to take their academic learning and put it into practical application," she wrote. "UAA's Baja Team is a great mix of engineering students who have done a fabulous job at representing UAA and Alaska in competition!"

Taking engineering to the track

Some of the Baja team members are completing frame assembly and other tasks at the UAA Engineering Design Studio, adjacent to University Center. The studio contains 4,300 feet of lab space and is equipped with drills, table saws, sanders, grinders, planers, tube and pipe benders, plasma cutters and welding machines.

"The biggest innovations," Josh Tempel said, "have been redesigning the suspension so it's tougher; the drivetrain, to have better gearing; and the frame, to be smaller. The biggest benefit of this project is understanding how engineering concepts apply to the real world."

Participants in the Baja project earn three independent-study credits. At the beginning of the fall semester, they split into teams that would, independently, design the car's frame, suspension and power train.

"It's been a learning process for all of us," Zachary said. "Building it has been very tricky. We designed with a team but during the build, the teams had to integrate together. We've had to manage time, prioritize parts that had to be built. Some parts just take a couple of minutes-brackets-but there are others that take time. You have to collaborate and make sure you don't have interference issues with other people's parts."

Zachary's rear caliper mount, for example, consumed more than 50 hours of design time because it had to fit over existing parts and withstand stresses the Baja will experience when it careens over steep hills on bumpy and tilting terrain, speeds around tight turns and hurtles through four hours of endurance laps.

"You take this guy and mount it to this bearing, which sits inside here," Zachary said, using his computer to move around the on-screen caliper mount and bearing carrier. "You can't change the size of this and we're trying to do this without breaching this inner diameter." 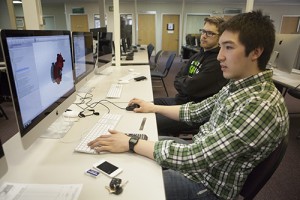 Participating in the Baja competition cultivates skills students will use after graduation, on the job, said Dr. Jeff Hoffman, the team's faculty adviser.

"They're learning about money issues, timeline issues and serious logistics issues that are all about Alaska," Hoffman said. "Ninety percent of it is learning to work as a team. When there are disappointments, there's no finger-pointing. They put their heads together and come up with a solution. That will take them a long way in life."

"I should finish the design today," Zachary said. "I'll probably be here pretty late. I've been putting in eight hours a day on top of school. This makes me appreciate the engineering it takes in the car I'm driving here."

"Building a better Baja" is licensed under a Creative Commons Attribution-NonCommercial 4.0 International License.