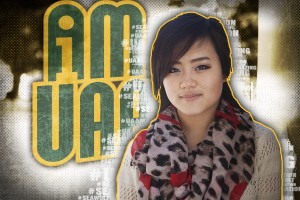 I AM UAA: Dao Her
Phil Hall/University of Alaska Anchorage

Dao Her remembers traveling from Thailand to Denver, Colo., when she was 9 years old. One month later she celebrated her 10th birthday. There were presents, she says, but it's all a little hazy.

She was busy adjusting to a new country, learning a new language and understanding a new culture. Dao and her family spent years in a Hmong refugee camp in Thailand before immigrating to the U.S. They were glad to see one familiar face when they arrived, an uncle.

The Hmong refugee camps first sprang up in the late 1970s in Thailand to accommodate tens of thousands of Hmong people seeking asylum. During the Laotian Civil War, a Secret War between world superpowers like the U.S. and the Soviet Union was also being waged in Laos. Both ended with communist takeover of Laos and a dangerous political climate for the Hmong people. The Hmong aided the U.S. and France in their fight against the North Vietnamese during the Indochina Wars, making them unwelcome in the regions they historically occupied like the mountains of Vietnam and Laos. In the last 30 years, thousands of Hmong people have immigrated to countries like the U.S., France, Canada and Australia.

Dao said she didn't really absorb the intricacies of the politics, like most kids.

"We lived in a refugee camp all the Hmong people were in," she said. "At the time we were so young, we just followed our parents everywhere they go."

It's how she came to call Anchorage her hometown after a brief stay in Colorado and a stint in California.

"When I first moved, everything seemed different. I thought, 'I want to learn the ABCs because that's the first thing, right?'" she said. It felt overwhelming, but she was determined.

After just a few months settling into Denver, Dao and her family moved to Sacramento, Calif., where she and her brothers and sisters-she is the oldest of five sisters and has five brothers, too-continued learning English in ESL classes. By the time she was ready for eighth grade, her family had decided that Alaska was in their future.

"When they came here, there was more opportunity for everyone," she said. They found jobs quickly while the kids worked hard in school.

Even in Alaska, maintaining a vibrant connection to Hmong culture isn't so hard when you're surrounded by family, Dao said. Hmong New Year is an important holiday they can share with all the cousins they have living nearby.

Who will be first in the chair for dental hygienist Dao?

High school, Dao admitted, was tough. "But I tried my best." She got involved with the multicultural club, including tutoring at Muldoon Elementary, and graduated from Bartlett High School last year. She is just wrapping up her first year at UAA as a dental hygiene pre-major.

She was also recognized with a Spirit of Youth Award this year alongside other inspiring teens throughout Alaska. See a full list of the winners here.

At UAA, Dao connected with a mentor through the Student Support Services program. The federal program is designed to help first-generation and income-eligible students successfully navigate college. Her mentor makes sure she has the academic and social support she needs while choosing degree program pre-requisites and plugging in to the student community.

Dao isn't the only member of her family to join Seawolf Nation, though. One of her older brothers is also a student. He's still deciding his ultimate goals-maybe computer science, maybe culinary arts?

So how did Dao settle on dental hygiene so quickly when faced with so many choices?

"When we first came to the U.S. we went to the dentist a lot and I thought it was really interesting. I thought, 'When I am grown, I want to do that,'" she says with a laugh.

Her next big step is deciding whether or not to take summer classes. She says she's looking to some older and wiser people to help her make the call. In the meantime, she's focused on homework, hers and that of her younger siblings and cousins who sometimes ask for her help.

They trust her to steer them in the right direction with their math assignments. The true test of their loyalty, though, might come when she asks to practice her new dental skills on them. Who will be the first to walk away with a sparkling smile, courtesy of Dao?

"Student Spotlight: Dao Her" is licensed under a Creative Commons Attribution-NonCommercial 4.0 International License.