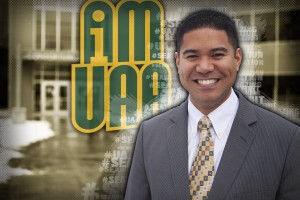 I AM UAA: Duke Kahumoku
Photo by Philip Hall/University of Alaska Anchorage

Back in March, Duke Kahumoku was on his last day overseeing a Model United Nations conference, when tensions surrounding North Korea's track record derailed the closing ceremonies. The Security Council changed plans abruptly, ordered a tribunal and interrogated the North Korean delegate on the nation's human rights atrocities and brazen nuclear program. The North Korean delegate calmly responded, "the Great Leader wills it, and this is how we handle things."

The event was UAA's annual Model United Nations conference (and the North Koreans were really just high school students from Polaris in Anchorage). Duke-a four-year member of Model UN-loves the unpredictability of the program, where students research and represent various nations in a simulated international forum. "The delegates from North Korea are always really fun," Duke said. "They are hardcore."

This year Duke served as secretary general of Model UN, the highest position in the UAA student group. Aside from leading the club throughout the year, he also helmed UAA's entire three-day, 200-student, 50-delegation Model UN conference on campus. For his tireless work and unmitigated enthusiasm, Duke earned AHAINA Man of the Year Honors, recognizing top achievers among UAA's multicultural student body.

But there's no time to sit back and enjoy a job well done. Duke and Model UN students are already organizing the 2015 conference.

A switch to public service

When Duke first arrived at UAA, he was splitting time between his young family, his education and his job. A change in management at work forced him into a tough decision-job or education-and after discussing with his wife, Duke enrolled as a full-time student at UAA.

He first got involved in Model UN in 2010, after switching academic gears from biology to political science. It's not as strange a leap as it sounds-he wanted to serve people in his career, and biology/pre-med was the obvious path to reach his goal. However, due to personal complications, medical school wasn't the most practical option. Political science was always in the back of his mind, so Duke decided to shelve his plans as a medical care provider and research avenues of public service instead.

He first went to the dean of the department with the simplest of questions-"What is political science?"-and met up with an academic advisor to see the scope of the department. "You're very well-rounded in terms of government, but it's not just that," Duke said. "You learn about the nature of man from all these different points of view. I thought it was really interesting. So I talked to [the advisor] and I think about a half hour later I went ahead and switched my major from biology to political science.

"It's been a great ride so far," Duke said. "I've really been enjoying it."

On the world stage

Despite switching departments, Duke maintained his drive to help others by joining Model UN.

Every March, UAA hosts one of the roughly 400 Model UN conferences in the world, inviting high school clubs from across the state to campus. Model UN conferences act as miniature versions of the real United Nations and allow students to participate in the debate, meetings, speeches, votes and motions that define the international organization.

Prior to the UAA conference, each Model UN club is assigned a country or two to represent, giving students time to research the history, policies and interests of their designated nation. When they arrive for the conference, students are well-briefed on topics as varied as Japanese fishing policy to Sudanese sovereignty.

In prior conferences at UAA, Duke chaired the Security Council-a committee primarily made of the most active, involved and senior students in each Model UN club. "These kids come and they are very prepared," Duke said. "I was sitting there chairing and I was so intimidated because they were just sharp and on their game and they represented their countries just incredibly well."

In 2014, Duke moved up from chairing Security Council to operating the entire event. In his current position, Duke is the face of the university during the annual conference and the man behind the scenes throughout the weekend. With over 200 participants and three days of events, that doesn't leave him a lot of time to sit back and observe anymore.

Although he ably handled the demands of this year's conference, Duke admitted it wasn't necessarily his cup of diplomatic tea. "I felt so bogged down. I just like to work with people and help them along and learn a lot from them," he said. Unfortunately, managing the conference kept him from focusing on any one discussion. "Being in committee is just the best because you get to see these high school students transforming and you just get to see them progress over the short time you have with them," he said.

Instead of observing a committee, Duke found himself at the podium giving a speech at the closing ceremonies (yes, the ceremony interrupted by the North Korean tribunal). As a man who generally shuns the limelight, the speech was a struggle. "I was so prepared for the conference that I didn't even think about the speech. I was writing it 10 minutes in advance," he laughed. "It was interesting."

Hosting the event is no small order. The 2014 conference just wrapped in March, but Duke is already at work for next year. "It takes a long time to prepare for this. It's a pretty big deal and its just getting bigger," he said. "In January and February I just don't even see my family," Duke said. "I don't see anybody."

How does he manage school, family and planning the conference? "I have a very supportive wife," he added.

But the stress is always worth it."The Model UN program is awesome," he said. "I really enjoy it. I have the chance to communicate with a lot of high school faculty, college faculty, businesses, sponsors and media."

Plus, the job comes with a snappy blue jacket.

Duke's hard work and steady involvement in Model UN has paid off in unexpected ways.

A few years ago, four members of the group traveled to the major leagues-the United Nations world headquarters in New York City. The 2011 trip was organized by professors Kimberly Pace, Model UN advisor at UAA, and Dalee Dorough, who also sits on the UN's Permanent Forum on Indigenous Issues (Dorough is in fact one of 16 worldwide members on the panel, and travels often to the UN in New York for meetings). Through Dorough's involvement with the United Nations, Duke and three other UAA students not only received a funded week-long trip to New York City, but also observed a committee in action at the UN-a rare opportunity at the extremely high-security headquarters.

Back in Anchorage, Duke recently received a significant award for his work and dedication to Model UN. He earned top honors from AHAINA-the multicultural student group at UAA-at their annual Men and Women of Excellence honors at the Hilton in downtown Anchorage. Duke called the award a surprise and, as someone who visibly bristles when attention is thrown his way, he found himself in another highly visible role.

Despite his best efforts, the spotlight has become a late trend in his academic career. "I'm already secretary general, and now this?," he sighed in regards to his Man of the Year honors. "I really enjoy my anonymity. I like to walk around campus and no one knows who I am," he admitted. "I love being involved in certain things, but then you get awards, and then people start calling. I didn't do it for that. I just wanted to help."

He brought his young family to the banquet and, while his restless eight-year-old son and four-year-old daughter fidgeted in their dress clothes, he took to the stage to give another speech.

Duke will finish his degree in political science this December, but plans to stay on campus and pursue a master's in public administration at UAA. "I want to do an emphasis in both health management-because I wanted to work in the health field-and public policy. I have two different directions I can go. I want to keep my options open." He may even add an M.B.A. to his M.P.A. "We'll see," he said.

Although he'll finish his degree in December, he also plans to stay on board as secretary general for next year's Model UN conference in March 2015.