Is Alaska ready to reform schools that don't work well for students?

Governor Parnell dubbed the 2014 Alaska Legislature the "education session," and Alaskans  certainly got an earful from supporters and opponents of school vouchers, and from citizens who want to see Base Student Allocation, the BSA, increased.

The session stretched five extra days while these school topics flared. In the end, compromise prevailed. The constitutional amendment to allow public money to go to private schools was sent back to committee, where it may surface again. Education funding grew by $300 million more per year to school districts, half going to the BSA and half going to programs outside of it.

Expect this pot to boil over again, next session and in years ahead. Not just because oil revenues are on the decline, but because schools in Alaska are not working for too many students, especially those in rural and indigenous communities.

Diane Hirshberg, professor of education policy and director of the Center for Alaska Education Policy Research within ISER at UAA.

Diane Hirshberg has spent her academic career trying to understand what works in schools, what doesn't, and why. She's professor of education policy and director of the Center for Alaska Education Policy Research within the Institute of Social and Economic Research (ISER) at UAA.

Last week she and a handful of education colleagues delivered an analysis of programs aimed at producing Alaska Native teachers (at or under 5 percent of the state's teaching workforce) and another that unpacks how teachers in rural schools feel about their experience. She's just started analyzing results on these same survey questions for Alaska's urban teachers.

Saying that schools don't work sounds harsh. But it was Hirshberg who affirmed it: "We know something very different has to be done."

For the moment, she leaps over BSA funding arguments (more on that later) to a deeper, more fundamental question: Should we consider changing the system for students least well served? Should we have schools that are community-owned and run (rather than the state-run schools we have now)? What would that look like?

"Other places are moving toward it. Our challenges are really common across Northern Canada, Northern Europe and other remote indigenous communities," she said. "Things change when communities themselves run the school." 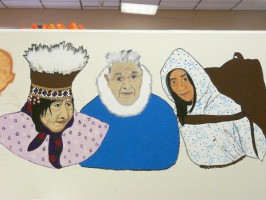 This mural of Native elders graced the walls of the Alaska Native Cultural Charter School in the Anchorage School District. (Photo courtesy of Diane Hirshberg/UAA)

Self-determination in education exists in the Lower 48 where federal officials and tribes have government-to-government relationships. In Alaska, our constitution says education is a state responsibility, and our state does not recognize tribal relationships between the federal government and indigenous leadership.

"We do not have a mechanism for tribal schools," Hirshberg said.

Still, that conversation is alive and swirling here. Just last week, the Alaska Native village of Kotzebue proposed a resolution to the National Congress of American Indians in support of tribally-operated schools by re-establishing Bureau of Indian Education funding in Alaska. A similar resolution passed AFN this year.

First Alaskans Institute and the Tribal Education Departments National Assembly (TEDNA) hosted a round table last Sunday in Anchorage on this topic, with the goal of "developing a vision to empower Alaska Native education in every community."

Hirshberg attended and listened. "One thing they brought up is a discussion on 'what we do well as indigenous people.' And they pointed to health care. Knowing it is possible for a collaboration of tribal entities to create a robust health care system, they asked 'what would it take to create a robust education system?'" 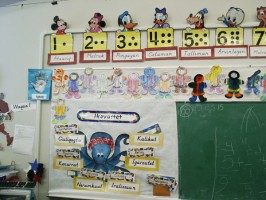 She's a clear supporter. Last month she and other faculty from UAA attended the International Congress of Arctic Social Services in British Columbia. There, she learned of a program in Labrador aimed at stemming high suicide rates among young men, a problem Alaska shares. The community-based school created a program that paired young men with subsistence hunters.

"They had them go out and learn how to fish, hunt and trap. They also had them donate what they caught to the community food bank, so they were addressing the issue of food insecurity. And they had young men bring their first fish to an elder. They were teaching these kids how to be respectful and engaged."

The community hasn't had a suicide in three years. Hirshberg said the reaction in the audience was palpable.

The Sami populations in northern Europe have community-based schools that teach in their Native language from early childhood through doctoral education. New Zealand is doing the same thing, with great success among its Maori people.

So it's possible here, too, she thinks, although it would take heavy lifting to undo restrictions and facilitate cooperation. Even within existing constraints, she sees great success in the North Slope Borough School District, where community members and district Inupiaq educators have developed "Inupiaq learning frameworks." Teachers are developing classroom units that incorporate these cultural frameworks alongside the common core standards.

People are watching this project closely. "You get a different sense of what it means to have a school reform project ... that reflects the community," she said. 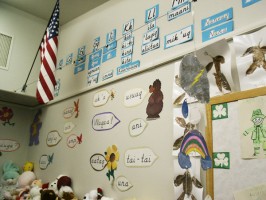 Another example of integrated language on a classroom wall at the Yupik immersion school in Bethel. (Photo courtesy of Diane Hirshberg/UAA)

Though she believes big reforms like these are needed, Hirshberg says we cannot give up on the existing system yet. Fixing the BSA is a part of that.

"People do not realize that the BSA is not based on any empirical research," she said. "It's based on increasing an amount set by a group of legislators a number of years ago, based on how much they wanted to spend."

With the way the school funding formula is set up, "we haven't been able to ask critically, 'are we spending the right amount of money in the right places?'"

She hopes a current post-session move to research school finance options will lead to savvier spending decisions, and even savings in some areas.

"Is Alaska ready to reform schools that don't work well for students?" is licensed under a Creative Commons Attribution-NonCommercial 4.0 International License.