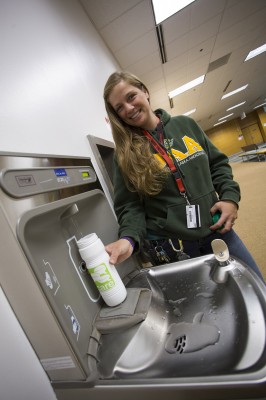 UAA's new drinking and refilling stations are springing up across campus with the help of our very own Stephanie Grant. Ted Kincaid/University of Alaska Anchorage.

Six months ago, a team from Facilities began replacing campus drinking fountains with new ADA-accessible water bottle filling stations, commonly referred to as hydration stations. In that short time, use of the new systems has helped save more than 57,000 water bottles from landfills.

'Who wants to drink out of that?'

Stephanie Grant, a fourth-generation plumber and part of the first mother-daughter journeyman team in her hometown of Toledo, Ohio, has been doing all the plumbing on the refilling stations, with electricians and carpenters from Facilities doing the rest of the work.

Grant, who began working at UAA about a year and a half ago, was quick to realize the dismal state of campus' original drinking fountains.

"I was fixing every water fountain on campus because they were pretty crummy. I was like, 'Who wants to drink out of that?' If I'm not going to drink out of it, probably everyone else feels the same way," Grant said.

So when Grant first heard about the fountains from a rep, she jumped at the chance to try one out on campus.

The first system installed in Gordon Hartlieb Hall was intended to test response and serve as a showcase for anyone who might be interested, but there were no plans for immediate expansion. Then Associate Vice Chancellor for Facilities and Campus Operations Chris Turletes saw it and ordered ten more, rapidly speeding up the replacement process.

But the fountains aren't just eco-friendly, Grant noted, they're thrifty. "The money you're saving the kids. $1.75 is what they charge here, so that's over $100,000 saved on water alone," Grant said. "Plus, the health of the students... I think if you can just spend $1.75, you're gonna buy a soda. But if you can fill your water bottle, it's healthier and better."

Most Anchorage drinking water comes from glacier-fed Eklutna Lake and goes through treatment at the city's central plant, making the quality better than average to start with. To help give it an extra boost though, all the on-campus bottle filling stations will eventually be equipped with filters.

As of now, there are 11 new fountsins installed on campus. Each comes equipped with a "Green Ticker," an electronic display that tracks how many times bottles have been filled up at that location and, by extension, how many one-use bottles were spared.

The total number of bottles saved by all stations (as of June 16) is 57,423. The fountain in traffic-heavy Social Science Building leads the pack with 16,484 bottles saved, but all locations have broken the 1,000-mark.

And the systems are clearly catching on. From April 21 through June 16, the fountains saw an average 161 percent increase in usage. An impressive climb when you consider much of that time period encompasses summer semester, when campus sees fewer visitors than during fall or spring semester.

More on the way

There are six more on hand waiting to be installed and 13 more on the way. Grant will continue leading the install on the systems as the schedule for other HVAC/Plumbing projects (new gas line for Energy Module 2, new water heater for MAC housing...) allows.

The next install location will be the winner of the Eugene Short Hall/Sally Monserud Hall energy competition, held earlier this year to see which of the pre-1970 (read: less efficiently designed) buildings could reduce their energy usage.

Since the new fountains are designed to be ADA-compliant, the first installation step is turning and repiping the waterlines and drain lines to meet the height requirements. This involves cutting a hole in the wall that is eventually drywalled and mudded by one of Facilities' carpenters.

"This is a side project. This is when everything else is done," Grant said. "And I try to only have one hole in the wall at a time."