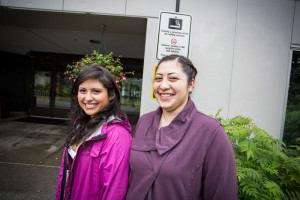 Yesenia Camarena and Valeria Delgado, student leaders for the smoke-free campus movement at UAA, stand in front of a sign allowing smoking outside campus buildings. UAA students approved a smoke-free campus in the April 2014 USUAA election. Now students are working to win support from staff and faculty. If the policy is implemented, it will allow a year for educating affected audiences. The students hope to see it in place by 2015. (Photo by Ted Kincaid/University of Alaska Anchorage)

When the university opens in a month, will staff, faculty and students have to go cold turkey?

No. That's because the student vote (719 yes, 628 no) landed as a request on the chancellor's desk, and if implemented, includes a one-year transition for educating affected audiences. Students and employees are expected to contribute ideas on enforcement.

With the majority student voice known, Chancellor Tom Case has asked faculty and staff leaders to poll their constituents at the start of the new academic year. This student initiative would change current policy, which allows anyone to light up outdoors within 20 feet of building entrances.

If UAA goes smoke-free, it will join other institutions in the U-Med District, including Providence Hospital and the Alaska Native Medical Center, that have already gone tobacco-free (meaning they ban smoking and chewing of tobacco products).

That's the update on the proposed policy change. What I found compelling is how UAA got here. It dates back to an Honors College class on the health disparities of Asian and Pacific Islanders, taught just once, in 2011, by a team of four: a public health professor (Gabe Garcia), a psychology professor (E.J. David), a library archivist (Mariecris Gatlabayan) and a communications professor (Joy Mapaye).

They trained their undergraduates in research methods, including designing a survey questionnaire that asked about health communication, discrimination and internalized oppression. After the class ended and over the next two years, students and faculty used this questionnaire to conduct a survey among Asians and Pacific Islanders in Barrow, Kodiak and Anchorage.

The professors are just now analyzing the data, and expect to present findings beginning this fall. One of the first will be at a research showcase for the public during the September opening of UAA's new Alaska Airlines Center. Public health professor Gabe Garcia plans to deliver this nugget: 60 percent of those surveyed reported feeling depressed within the last month. Coming from a population that traditionally chooses not to acknowledge or even discuss mental health issues, that's significant.

This week, I talked with Garcia and several of his students to understand how that one class led to a two-year campaign for a smoke-free UAA.

The class was small; only five students finished. Three went on to pursue public health interests, including one who'll join UAA's public health graduate program this fall. Her name is Mu En Hu. Her family came to the United States from Taiwan when she was a child. English is her second language, though now she speaks fluently. She plans on becoming a medical doctor, but also wants a background in public health.

But their survey, developed in the honors class, had only one question on smoking. So where did the energy for a smoke-free campaign come from? 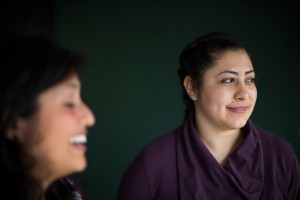 She came to Alaska from Mexico in the fourth grade, speaking only Spanish but excelling in math, specifically long division, just as her Anchorage classmates were tackling it. She describes Russian Jack Elementary and Clark Middle School, and eventually East High, as diverse environments where she felt right at home.

When Delgado landed at UAA, she wanted to get involved. A friend invited her to the wellness club, a group that had begun pressing their advisor, Gabe Garcia, on what they could do to make UAA a healthier place for students.

Garcia's academic research is on smoking behavior, dating back to his doctorate from UCLA. Given that 99 percent of smokers start by the age of 26, he suggested they consider working for a smoke-free campus. That idea fell on willing ears.

Delgado's mother was once a smoker, and her sister has asthma. A 2012 survey of UAA students showed more than 40 percent of tobacco users supported a smoke-free campus. Delgado and pre-med student, Yesenia Camarena, 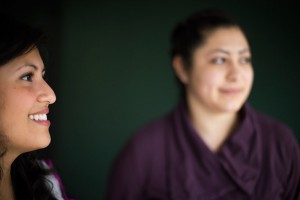 got busy. They collected 400 student signatures in favor of a smoke-free campus and brought their petition to the UA Board of Regents. There, it stopped.

"They told us a petition with 400 signatures wasn't representative enough," Delgado said. So they pushed for the election last spring.

There were dissenters, especially around a policy interfering with personal choice. The award-winning Seawolf Debaters argued pro and con in a February public event. KRUA's campus radio news team and the student newspaper presented competing commentaries. Dueling Facebook pages gave vent to strong feelings on both sides. A last-minute poster campaign suggested smokers were being treated as if they had leprosy.

And then the April pro-vote settled the issue for students.

Garcia, the public health researcher who's studied smoking behavior most of his professional life, is particularly gratified. "It's important to start in your own neighborhood. If you can't change your neighborhood, how will you change the world?"

A version of this story by Kathleen McCoy appeared in the Sunday, July 27, 2014 Alaska Dispatch News.