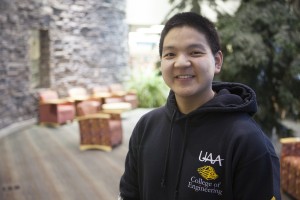 Frazer Tee started earning college credit while he was still in high school. He connected with the Alaska Native Science and Engineering Program (ANSEP) and enrolled in their pre-college program at UAA when he was just a sophomore at Service High School. His first ANSEP assignment? Build a computer. As a high school junior, he enrolled in Calculus and Introduction to Engineering through ANSEP's Acceleration Academy, banking college credits and checking some things off on his high school requirements list, too.

He credits ANSEP with helping him plan for his future. Their Summer Bridge Program plugged him into an internship at BP after high school graduation.

"I also took Calculus II that summer, but that networking opportunity with BP opened my eyes to thinking about a future," he said. "As a high school student, you go, you have fun with friends, you do things, but you don't exactly look too far ahead. Well, there are some people, but I wasn't one of them. What ANSEP helped me out with was thinking about the next step."

When Frazer enrolled as a freshman at UAA, not only was campus a familiar place, but his classes were peopled with friendly faces, other students he'd met through ANSEP programs.

Frazer also had some firsthand knowledge of ANSEP and UAA from an inside source-his two older brothers. He's the third brother of four to pursue engineering education at UAA through the ANSEP program.

The story rightfully starts with their dad, though. As a young man, he worked long hours as a waiter and banquet captain at the Sheraton. As Frazer tells it, one day while his dad had his arms full of plates, he got to thinking, "What am I going to do when I can't carry these heavy trays?" So, even though the money was good, he made a career switch and began working in telephone maintenance and repair, eventually teaching himself about computers in the aisles of the local bookstores as he worked his way up in a new profession. Then along came four boys, each about two years apart-Jared, Kyle, Frazer and Spencer. He knew college would be part of their future. One day, he was walking the halls of Service High School and spotted a brochure outside the counselor's office. It was for the ANSEP program and it seemed like a good fit for his family.

"My father jokes that one day we'll start a firm," said Frazer. "I think we're just missing a mechanical engineer."

'Brain squids' and 'Computing for Disasters'

As an undergraduate, Frazer has had the opportunity to engage in some pretty cool research. This past summer, he was selected for the competitive National Science Foundation-funded Research Experience for Undergraduates program. Researchers at Texas A&M recruited him to join them for the summer in their laboratory research, "Computing for Disasters."

"It was interesting because it was any ways we can use computing, robotics, technology to help whenever there are natural disasters," said Frazer.

This year, he connected with a computer science professor, Dr. Martin Cenek, to work in his ICAN (Intelligent, Complex Adaptive Systems and Networks) lab. Frazer works as a primary investigator in the lab, gathering brain wave samples in a study of the mobile possibilities for EEG authentication. Essentially, they're testing to see if you can "think" your computer and phone passwords, rather than use written passwords or biometric passwords, like fingerprints or eye scans.

There's been a lot of research done to study the possibility of using EEGs (electro encephalograph or brain wave data) as a means to create viable, unique, unhackable authentication methods. The mobile applications haven't been so thoroughly researched, so Cenek and his team, including Frazer, are finding out what impact noise and visual interference or physical movement have on EEGs. To do that, someone has to gather samples. And that, of course, requires a "brain squid."

"I'm IRB (Institutional Review Board) certified, so I can collect samples using our commercially bought headset. It's a wireless headset and it's got about 14 sensors and it looks like a brain squid," said Frazer. "It wraps around your head so we can collect these samples." He's also written code to analyze the data.

Spending time with Cenek in the ICAN lab and in the Texas A&M lab also got Frazer thinking about graduate school as a possibility. Whether he opts to head straight into the workforce or on to graduate school after graduation, he has been happy to have the support of the ANSEP community and his family.

"My dad and my mom have emphasized throughout high school and college, 'focus on your studies,' so that's what we've done," said Frazer. "We haven't had to work part-time jobs. We've had help from scholarships and plenty of support from our parents. We haven't had to worry about where tuition is going to come from. We've put in a lot of hard work for our degrees and they're supporting us the entire way."

Wherever he lands after his December graduation, he knows he'll always have his roots to fall back on. He said, "Just as Alaska will always be home, I'll always have my brothers when I need them."