Offering forensic nurses a new way to make a difference 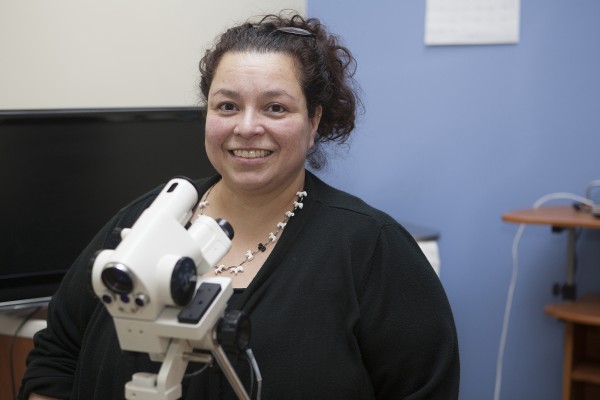 Dr. Angelia Trujillo, who teaches forensic nursing at UAA, wrote an article about violence prevention for the Journal of Forensic Nursing that is among the most-viewed articles on its website. (Photo by Philip Hall/University of Alaska Anchorage)

Over time, you and others living in the city continue finding more people flailing in the river, so your response to those victims improves-with funding made available to improve rescue programs, teach people to swim and help victims recover.

One day, as you're rushing to help another victim, you think, "What is going on upstream? Why do we have so many victims?"

UAA's Dr. Angelia Trujillo applied a revised version of the popular "Upstream, Downstream" parable in their article, "A Practical Guide to Prevention for Forensic Nursing," which she co-authored with Dr. Tina DeLapp and Dr. Thomas Hendrix. The Journal of Forensic Nursing published the article in its January-March 2014 issue.

The article became one of the Journal's top-10 articles, placing seventh, based on views on OvidSP, between January and October, and second-most viewed on the Journal's website.

"Of note, your article was the only one to be in the top ten for both lists for this time frame," said Cindy Peternelj-Taylor, the Journal's editor-in-chief, in a congratulatory email she sent to Trujillo.

The article by the UAA professors might guide forensic nurses to solutions-staunching their workflow and providing positive balance in a career that frequently exacts a heavy emotional toll.

Forensic nurses stand at the intersection of medical care and the law. They treat victims of violent crimes while collecting, photographing and otherwise documenting the blood, bruises, hair, semen, saliva and other evidence law enforcement can use to find and prosecute the people who hurt them.

There is no shortage of victims, because interpersonal violence (IPV) pervades the lives of men, women and children all over Alaska and the rest of the United States. One in five women and one in 71 men in the U.S. have been sexually assaulted, with half of the women being assaulted by someone they're intimate with, according to the National Intimate Partner and Sexual Violence Survey, published this year. Alaska's rates of sexual assaults, domestic violence and child abuse consistently rank among the worst in the nation.

IPV also affects the lives of people who aren't being assaulted, costing the nation up to three-quarters of a billion dollars in additional health care spending.

"In an environment of increasingly scarce healthcare resources, the prospect of reducing those expenditures should be sufficient to motivate policymakers to invest in IPV prevention," Trujillo's article stated.

That's where forensic nurses can help.

Reaching out to make a difference

Trujillo worked for years in public health for the Municipality of Anchorage, getting sexual assault response training and earning a master's degree in advanced community health nursing.

While working on her master's degree, she handled more than 500 cases in five years as program manager for Anchorage's sexual assault response team, participating in death investigations and cases that involved elder abuse, child abuse and sexual assaults. She then earned her doctorate in forensic nursing.

Trujillo joined UAA's faculty in 2007 and teaches the forensic nursing course, which is offered online every other summer. The curriculum serves double duty, since it's also used as part of the curriculum for the legal nurse consulting certificate UAA's Justice Center offers.

There is a pressing need for forensic nurses in Alaska, a place with rates of sexual assault far above the national average-yet there are fewer than 75 trained SART nurses, statewide-so Trujillo travels to the Kenai Peninsula, Mat-Su, Juneau, Kotzebue, Nome, Dillingham, Bethel, Sitka, Ketchikan, Petersburg and Fairbanks, to train local sexual assault response team (SART) nurses.

While the forensic nurses she trains will help crime victims all over the state of Alaska, Trujillo wants to do more.

"It's always been my goal to promote violence prevention," she said.

You don't get a satisfactory answer when you voice your thought about why so many victims needed to be pulled from the river. Other rescuers tell you to focus on rescuing victims-that if people in the rural areas upstream needed help, they would say so.

So you venture upstream to see what's going on and find appalling things: a bridge with holes in it that people fall through, no signs warning people of a nearby treacherous-looking waterfall, no protective fencing at the river's edge and waterfall and a lack of money available to fix the bridge and offer swimming lessons. In addition, you see some people in the upriver areas routinely pushing others into the water.

You go back downstream and tell others what you've seen and find that the people in the city don't believe that people upstream are pushing others into the water and won't do anything to help stem the tide of victims.

Trujillo teaches her classes of 15-20 students what forensic nursing is, guides them through the tangled thicket of interpersonal violence issues, talks to them about potential places they could work and helps them figure out how to apply forensic nursing principles in their everyday jobs as nurses in home health, hospital wards and operating rooms or doctors' clinics.

A hospital nurse who's received forensic training would be more likely to spot and preserve evidence that could later be critical to an arrest or trial.

"They're better able to recognize signs and symptoms of abuse," Trujillo said, "better able to talk about what the options are and be open with their colleagues-'Wait a second, don't throw those clothes away, we don't know what just happened.' 'Don't put them in a plastic bag, put them in a paper bag.' Use the patient's words, use quotations-even if they use the words you wouldn't use. Document them. That is a way of helping others who read this after you-we're not end users of those nurse's notes."

Trujillo teaches her students how to properly use a colposcope and other equipment, how to photograph a victim and his or her injuries and the importance of placing an L-shaped forensic ruler in a photo to establish scale.

"Part of what we teach in forensic photography is that understanding of how to take pictures of a victim," Trujillo said, "[respecting] the victim's need for privacy and confidentiality but also the need to capture the evidence-the picture of the bruise or laceration or injury that's present and is going to go away when it's healing."

A nurse's properly made photographic record can guide a police officer, prosecutor and jury, help them follow what the nurse did during the exam and better understand its findings.

"We might be in the emergency room, we might be in an [operating room]," she said. "I have done forensic photography in people's homes when we had to visit victims who weren't medically stable enough to be transported-elder abuse. I've done it in pediatric ICU, I've had to crawl up on patients' beds with nurses' flashlights behind my head because the lighting was weird but I had to capture an injury on the inner thigh. That's part of what I teach."

"The victim is a crime scene," Gernat said. "If someone doesn't handle the evidence correctly, they're contaminating a crime scene. If someone isn't correctly taking swabs, that can be fatal to a case. If someone isn't putting a paper mat on the floor before the victim takes off their clothes to collect hair and fibers that fall off, evidence can just get swept away. If a victim in a date rape drug case immediately shows up at a hospital after the assault and is allowed to urinate, defecate, vomit, take a shower, they could literally be flushing away evidence. Sexual assault nurse examiners can prevent these things from happening-they know what to do and not do."

'What bothered me most was the child deaths'

Trujillo wrote her article to help forensic nurses take what they do every day-responding to violence-and incorporate the different aspects of prevention into their work and their lives.

• Primary IPV prevention focuses on the impact of social learning to promote change, especially in the way men and women behave toward each other.

"All levels of prevention should include awareness of issues of gender inequalities and impact of sociocultural norms," Trujillo wrote in her article.

• Secondary IPV prevention seeks to prevent further injury or violence once it has occurred-caring for victims and promoting a resolution through the criminal justice system.

• Tertiary prevention focuses on eliminating long-term harm both by helping the person who experienced violence, rehabilitating the person who inflicted violence and establishing policies, legislation, public education and other programs to keep violence from surfacing again.

Forensic nurses can use their public health knowledge to help educate and empower victims, develop programs, speak at schools, and, like Trujillo, write articles.

Trujillo has seen, firsthand, what happens when no one ventures upstream. She's seen everything that can happen to a person's body in a violent context, on everyone from newborns to people in their 80s.

"What bothered me most was the child deaths I saw as part of my doctoral training in Houston," she said. "The other thing that bothers me is not the injuries to the children, it's how they get injured, what's happening in their home life. That's why prevention is so important. I'd like for kids not to get injured again. I'd like for women and men not to get assaulted, not to be victims of domestic violence. For me, prevention is so important. If we could prevent that from happening, I would be happy."

"Offering forensic nurses a new way to make a difference" is licensed under a Creative Commons Attribution-NonCommercial 4.0 International License.