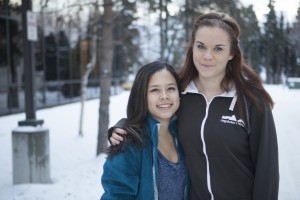 Ever wanted to study Scandinavian design at University of Lapland? Or indigenous studies at University of Greenland? Maybe environmental studies at the appealingly named State Polar Academy in Russia? Thanks to UAA's involvement in the University of the Arctic-a cooperative network of educational institutions in the North-these are just a few of the myriad options available to interested students at UAA through the north2north exchange program.

north2north is an educational initiative organized by the University of the Arctic network. The program links 59 participating universities across eight Arctic nations, allowing for easier exchange of students and-consequently-ideas and practices as well.

"north2north is a wonderful opportunity," said Leslie Tuovinen, education abroad coordinator in the Office of International & Intercultural Affairs. Leslie advises students interested in studying abroad and makes sure they are navigating the sometimes-daunting process successfully. Her ground floor office in Rasmuson Hall is adorned with maps and postcards and a floor-to-ceiling bookcase stacked with brochures for study programs around the world.

north2north, though, is a different program than the classic idea of study abroad. Other programs take care of everything-meals, housing, classes, etc. north2north, though, simply facilitates the exchange. Students pay UAA tuition, but enroll as full-time students at their host university. That means they have to figure out many details independently-housing, meals, transportation from the airport and even whether or not classes are taught in English-relying on guidance from the host university.

It's definitely a challenge, but also an incredible opportunity for students looking for full cultural immersion-especially those with an academic interest in the Arctic, whether its art, design, history, engineering, health, etc.

Is north2north the right program for you? Leslie suggests the program to any student with the following traits: "Certainly independent, mature, highly motivated, persevering, good stick-to-itiveness and a huge desire to get out of their comfort zone on a daily basis."

Exchanges can be more daunting than study abroad programs, but also offer far more independence and personalization. "It could be great for the right student," said Leslie. 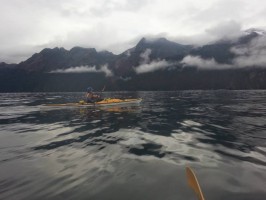 Norway or Alaska? Both locations are known for mountain backdrops, epic waterways and outdoor sports... but, yes, this photo is Alaska (Photo provided by Alexandrea Spindler)

Two of those students are here this semester. Kelly Hughes spent 10 months last school year at University of Stavanger, located in a coastal city home to various oil companies (sound familiar?). She returned to Anchorage this June. Sofie Tindvik arrived in August from Nesna University College-based in a small town in northern Norway.

The two never met in Norway (Stavanger and Nesna are an impressive 22-hour drive apart) but recently sat down on campus to talk about Norway, culture and the value of a semester abroad. They agreed on most things (Alaskans and Norwegians are both seriously into the outdoors) and disagreed on others (namely, the gelatinous fish dish called lutefisk-"I didn't think it was that bad," said Kelly. "It is that bad," interjected Sofie), and even shared a few fun facts (namely, bacon is cheaper in Sweden).

Kelly sought out her year in Norway after reaching a point of fatigue at UAA. "I was tired of being in the same place, seeing the same people all the time," she recalled. "I wanted to do something different." She checked UAA's list of scholarships and found the Kaare Birkeland opportunity-a partnership specifically between UAA and University of Stavanger (although both are north2north schools).

"I always wanted to go to Europe-I never thought of Norway," said Kelly-an international relations major focused on French. "It was actually really exciting. It's just one of those experiences where you're in elation and disbelief-a really happy moment I got to experience by going to Norway."

Sofie, while at her university in Norway, found north2north thanks to the visual power of wolves. She stopped by the study abroad office at Nesna and-while waiting for her advisor to end a phone call-started looking through the shelves. "Then I saw this brochure with a wolf on it. I was like 'ooh a wolf!'" she laughed. Sofie brought the north2north brochure with her, and her advisor immediately recommended the program. "She was like 'I just went to Alaska. We will make it happen," Sofie recalled. "She really wanted me to go here, which I'm not sad about." 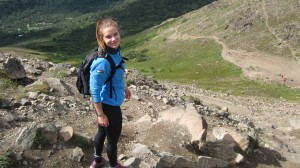 Sofie on one of her many Alaska excursions around Anchorage. (Photo provided by Alexandrea Spindler)

Her arrival was a tad daunting. "My first meeting with the university was pretty terrifying coming from that small university in Norway," she said. "It was pretty big and I have gotten lost sometimes." Sofie studies physical education in Norway and found some excellent options at UAA. Her courses include Alaska Native studies, backpacking, kayaking and a comparative independent study. She's now quite familiar with UAA-she lives in campus housing and has joined several programs, like the Nordik Culture Klub. Sofie describes Norwegians as "so awkward," and may have proved her point by singing Norwegian songs to the assembled members of the Norwegian language club at a recent meeting.

They both ended their semesters in meaningful ways. For Kelly, the end of her year abroad was a time for reflection. "I took the time to appreciate everybody," she recalled. "In my theater class-I was the only exchange student, and the rest of the students were Norwegian-we were saying what we learned and what we'd like to improve. I just had a moment where I had a breakdown and started to cry. Because I felt like the connections I had made with the Norwegian students was really memorable-they made that last semester something that was totally unexpected and just really heartfelt for me.

"It was a really great experience."

"When you study a semester abroad, you really get to know the culture," Sofie reflected. "In just two weeks, you really don't get it ... This is the first time I've been traveling all on my own, so I really had to get into it. If not I would sit alone in my room."

Sofie has big plans for her final days in Alaska. She flies out on December 14, the day Kelly graduates. But before then, she'll squeeze in a ski trip to Alyeska and light up the fire pit. "I've never tried s'mores, so I'm making a bonfire and having some s'mores," she stated.

Although Kelly and Sofie's experiences are complete, the north2north program rolls on. A few more students will arrive in Anchorage next semester, and Kelly is already in touch. "One of my Norwegian friends placed me in contact with one of the Norwegian girls that's coming here," she explained. "It's really nice because you get to make connections that hopefully will last for a really long time."

Interested in a semester abroad in the North? Learn more about north2north at UAA and see a list of participating universities. For questions, contact the Office of International & Intercultural Affairs.