Project 49: Grace without Vin, a love story without a happy ending

Project 49 is a monthly series from the University of Alaska Anchorage, highlighting characters and events from Alaska's rich history that have been preserved in our archives. 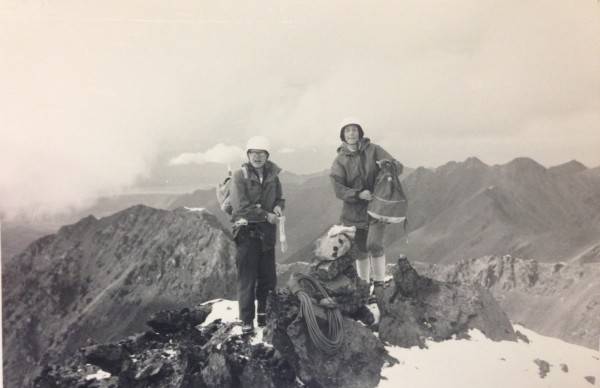 This love story does not end well. If I could rewrite it, I would.

John Vincent Hoeman, or "Vin," as he was known by his friends and family, was an avid outdoorsman. He earned a degree in forestry management in Colorado and worked as a biologist and naturalist, collecting samples and specimens in far-flung places, mostly as a way to support his mountaineering habit. His climbing journals show page after page of first ascents, summits and attempts around the world between 1951 and 1969.

"Our son was transformed when he was planning an expedition or actually climbing. It was life!" wrote Vin's father in a 1969 letter. "The rest of the time was pacing off the days until the very next time."

The year he turned 30, Vin celebrated not only a landmark birthday, but a "highpointer" milestone: he was the first person to climb the highest peak in each of the 50 U.S. states.

That year, 1966, he also married his sweetheart, an Alaska newcomer, Grace Jansen. Grace was an American-born physician, raised in Switzerland and educated in Germany and Holland. She worked as an anesthesiologist in Anchorage when she wasn't busy climbing mountains with her friends and her climbing-partner-turned-husband. 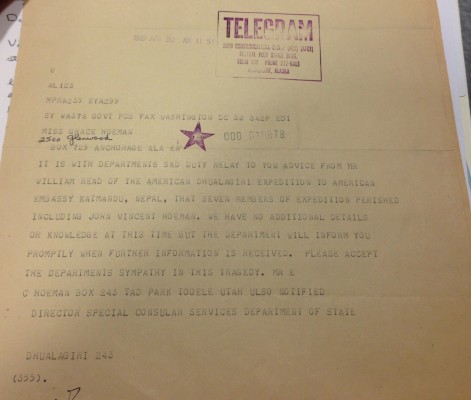 Just three years after they were married, in 1969, Vin was killed in the Himalayan mountains, part of an advance party tasked with building a bridge over a crevasse on the southeast ridge of Dhaulagiri. Vin, along with two Sherpas and four other members of the National Geographic-sponsored Everett Expedition, were caught in a massive ice avalanche. No bodies were ever recovered.

In a letter dated May 4, six days after the accident, expedition members Jeff Duenwald (who had been with the following party expedition members at base camp when the avalanche happened) and Al Read (who had been evacuated from the mountain with pulmonary edema a couple days before tragedy struck) wrote to Grace, "Vin's body lies under tons of ice and snow beneath Dhaulagiri. There is no more noble monument-there is no prouder resting place."

"I've lost the best I ever possessed on earth and it will be very hard to accept," Grace wrote to Vin's cousin, Alfred Beyersdorf. "It is my regret not to have been in his company when it happened."

The thing is, Grace was supposed to accompany Vin on the Dhaulagiri expedition. A threatened mutiny by the other expedition members at the idea of a woman in the party led to some heated letters between Vin and Boyd Everett, the expedition leader.

In one letter, Vin wrote, "As for her supposed light experience, does the experience of Dr. Jim Morrissey extend for 30 years over four continents, including several major expeditions, many first ascents, a successful climb of a 20,563-foot mountain, as good a rockclimb (sic) as Igikpak? Let's face it, some member or members of our group don't want a woman sharing what they consider a man's adventure." 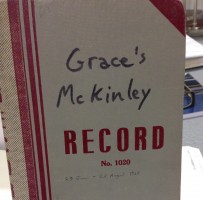 It wasn't the first time Grace had been left behind, though. Despite her husband's confidence in her abilities, he actually left her behind midway through an attempt on Denali. Grace's Denali climbing journal from 1967, covering two trips to Mt. McKinley, records this fact, along with all the thought daggers she was sending his way from inside her lonely tent. (Digital images of the journal were recently uploaded and each page transcribed by archivist Veronica Denison. The transcription is available online at Alaska's Digital Archives.) It was Grace's second assault on the mountain that summer after being sent downslope on her first attempt, against her wishes, to assist rescued members of the doomed Wilcox expedition (seven men in their party were killed on Denali, the biggest single tragedy for Alaska's highest peak to date). Her climbing partners continued on in that first 1967 expedition-turned-rescue-mission to recover three bodies. Four men were never found.

As mountaineers in wild Alaska and beyond, Grace and Vin were no strangers to death. They mourned friends who were killed in climbing accidents and discussed the life and death nature of their passion in letters to each other and to friends and family. "Be careful," Grace entreated Vin in the margins of a letter sent to Kathmandu, "No mountain is worth it."

In a letter dated April 29, 1969, a day after Vin's death, Grace wrote, "This must serve to tell you how much I love you and how concerned I am about this endeavor, wishing every day it were over already...Come home soon."

After news of Vin's death reached her by telegram, Grace exchanged bitter letters with the surviving members of the expedition-Jeff Duenwald, William "Al" Read, Jim Morrissey, Jim Janney, Terry Bech and Lou Reichardt, who was the only expedition member to survive the avalanche that claimed Vin-trying to understand what went wrong. She also corresponded with Vin's family, her own family (primarily in German) and with the widows of the other members killed.

"The neat block print that says they're dead is hard for me to believe," wrote Wendy Bryant, fiancée of Dave Seidman, also killed in the avalanche. "But this I do believe. They lived. Every vibrant, aspiration-filled day. I grieve for us all."

Grace wrote a letter to Wendy in return, telling her this was not her first experience with loss, though it was the most wrenching. Her first husband had been killed in World War II.

"God help us all. I, too, was married before. I, too, have stood helpless with horror and despair as, once again, all my dreams, all my tomorrows turned to ashes," replied Wendy. "My shriek of anguish mingles with yours to clutch at the silence of each unrelenting night." 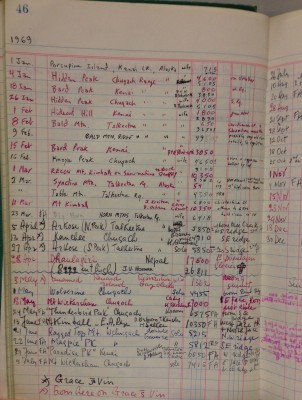 In Vin and Grace's joint climbing journal, there's a very small break, a squiggly blue line below the Dhaulagiri entry that signifies all entries going forward are Grace's. She made a small red x beside her first solo climb, on May 3, days after she learned of Vin's passing and scrawled at the bottom of the page, "x) from here on Grace [without] Vin," using medical shorthand for "without."

"Our hearts go to you, but we know that if you are strong enough mentally to be a doctor, you will weather this loss and bury yourself in daily service to others," wrote Vin's father to Grace. Instead, she buried herself in Vin's unfinished work, writing a guide to the 50 tallest peaks in the U.S. and curating Alaska's biggest (at the time) mountaineering library in between climbing expeditions, many of them solo.

There are 72 more entries in the climbing journal after that squiggly line, including one dated 6 July 1970, the successful Denali Damsels climb of Mt. McKinley. Six months after Vin died, Grace was tapped to lead an all-women Denali expedition. After months of planning and careful preparations, the Damsels became the first all-women expedition to summit the mountain, though it wasn't without some drama-all documented in Grace's climbing journals and letters before and after the trip. It was Grace's third attempt on the mountain and as the team came within sight of the summit, their leader was incapacitated with altitude sickness. Grace's climbing partners roped her in between them and assisted her to the summit to save her from being left behind on her third try for the top.

In a letter dated Aug. 25, 1970, Grace wrote, "All the ladies of the Denali Damsels exp. made the summit...I was rather altitude sick and we found out why: I had and have no serum iron to make red blood cells with, and so I climbed McK with sea level redcells (sic) and a determination to succeed. I'll never climb with an all ladies group again, although it was an interesting experiment."

The final entry in the climbing journal is in different handwriting: "12 April, Eklutna - Girdwood Traverse, died in avalanche." Just shy of the April 28 anniversary that would mark two years since Vin's passing, Grace and a climbing partner, Hans van der Laan, were killed in an avalanche as heavy snowfall and poor conditions led them to abandon their plans to traverse the Eklutna glacier. Their bodies were recovered later that summer.

An "In Memorium" piece published in the American Alpine Journal, after listing Grace's many climbing achievements, mentions Vin's death and goes on to say, "Grace met a not unwanted similar death...Grace was aggressive; Grace was sometimes abrasive. Her sense of right and wrong was peculiarly hypertrophied. She fought battles which did not need fighting. But she knew serenity; she knew love. She was an unusual and extraordinarily gifted person."

The Grace and John Vincent Hoeman Collection is archived in the UAA/APU Consortium Library, Archives & Special Collections, and accessible to the public. Visit their website for details. Written by Jamie Gonzales, UAA Office of University Advancement

"Project 49: Grace without Vin, a love story without a happy ending" is licensed under a Creative Commons Attribution-NonCommercial 4.0 International License.