The ghosts of theaters past

This is not your average Shakespeare season. 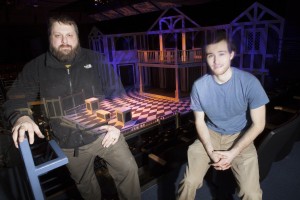 The UAA Theater department dedicated their 2014-2015 season to Mr. William Shakespeare, but the bard himself penned only one of the year's four plays. Equally surprising, the theater department staged their final three productions on essentially the same set. It's a unique decision, but it accurately reflects how Shakespeare would have staged his plays back in the day of façades (more on that later).

This theater season is an authentic and impressive tribute to theatrical history-a tribute that also involves zombies (more on that later, too). 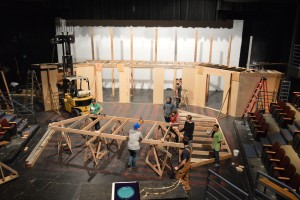 Step inside the Mainstage theater this year and be transported to Shakespearean England. Rather than build a new set each show, the design crew stayed true to the legacy of original Shakespeare and built an authentic Tudor façade.

It's been a one-of-a-kind creative process for professor Daniel Carlgren and his assistant technical director, Christopher Evans '16. Although Shakespeare is a staple of theater programs worldwide, few have taken their enthusiasm to the same levels of UAA.

"Going into this, I wanted to bring something new to the student body," assistant professor Daniel Carlgren explained of his unique set-building vision. "This is something that hasn't been tried in Alaska probably ever. And I'm not sure how many universities have tried to put up a façade and use it for three different shows."

The façade, for those unfamiliar with renaissance theater construction, reflects the architecture of Shakespeare's days. Modern theaters are typically empty, flat and dark-a perfect blank slate for each show to build on. In Shakespeare's time, though, building a new set wasn't an easy or available option. Instead, directors would transform the stage for each show with a little bit of creative painting, costumes and props while the background stayed the same. The theater itself had to be the statement-maker.

The two-story set occupying UAA's Mainstage is an accurate recreation of Shakespeare's theaters, from the Tudor molding to the groundlings pit. For a Shakespeare fanatic like Daniel, it's been a bit of a dream. 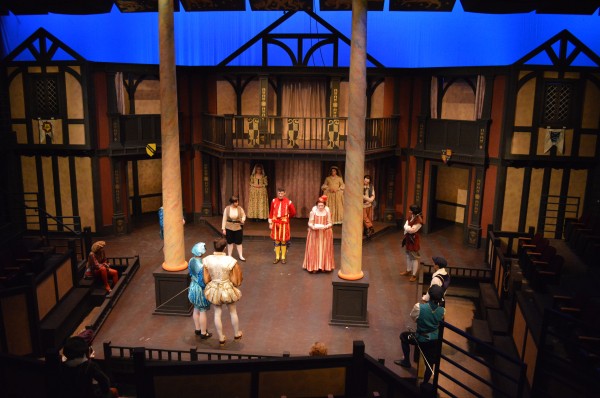 The cast of Twelfth Night runs a dress rehearsal in full costume on the Tudor-style stage. (Photo courtesy of Daniel Carlgren)

Deep in the heart of Shakespeare country

Daniel arrived at UAA from Ashland, Oregon, where he worked four years at the Oregon Shakespeare Festival-the nation's largest Shakespeare festival-and also taught theater design at his alma mater, Southern Oregon University. When he moved up to Anchorage in 2013, he brought his experience from the heart of America's Shakespeare scene with him.

UAA's Mainstage was prime for this year's project-it already thrusts out into the audience, much like a Shakespearean stage-and after years working with Ashland's façades, Daniel was ready to attempt his own.

To top it off, Daniel received financial support from an anonymous donor to spend a month in the U.K., researching historic sets. "I tried to make what we out on stage as authentic as possible," he said.

Last fall, the set opened with Shakespeare's cross-dressing comedy Twelfth Night. Currently, the absurdist Hamlet update Rosencrantz and Guildenstern Are Dead is running on the Mainstage, and the season closes in April with everyone's favorite Renaissance zombie production, William Shakespeare's Land of the Dead: A True and Accurate Account of the 1599 Zombie Plague. 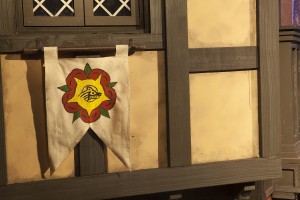 UAA's façade is modeled after the Rose Theater in London. As an extra tribute, the props crew created a Seawolf-adorned Rose banner for the production of Twelfth Night. (Photo by Philip Hall/University of Alaska Anchorage)

UAA's faux façade is a tribute to the Rose, a 16th century London theater and frequent home of Shakespeare's works. Twelfth Night was actually written to debut at the Rose, and Daniel chose paints and textures to match the original theater's Tudor timeline-a color scheme of deep brown and cream, crimson red curtains, intricate stencils and family banners (including a modern Seawolf adaptation).

For the second show, the crew swapped Tudor style for Elizabethan designs and scaled back to the bones of the theater, adding a warped floor to match the afterlife setting of Rosencrantz and Guildenstern.

The season's last show takes place during a fictional zombie invasion backstage at the Globe Theater in 1599. The façade will get a final facelift back to Tudor style, backstage staircases will replace the Juliet balconies and the center platform will retract to a simple walkway.

Summarizing the season, Daniel noted the UAA audience will enjoy "this fully immersed experience of seeing the stage authentically, seeing it warped out of reality and then seeing it turned around in its authenticity...but with zombies."

The current production is the last chance to take in a show as a groundling.

Groundlings, in Shakespeare's days, were the patrons who couldn't afford the three tiers of balconied seats. For a small price, they could get right up to the stage. They'd just have to stand the whole time.

True to form, UAA's set included a groundlings pit up front. Unlike the good ol' days, though, UAA's groundlings get to sit on cushioned benches, built just a touch too small. They won't be standing, but the audience members who opt for the pit will literally be sitting on the edge of their seats. "It's comfortable, but it's not super comfortable, and that's part of the experience," Daniel smiled.

Since the final production takes place backstage, the groundlings pit will have to go. If you want to book a spot up front in the cheap seats, Rosencrantz and Guildenstern is your last chance. Groundlings seats are $5 a show, first come first served. 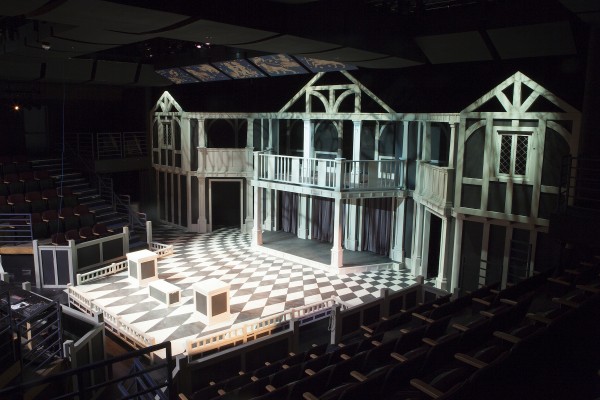 For its second iteration, the UAA Mainstage received a stripped-down Elizabethan makeover for Rosencrantz and Guildenstern are Dead, now playing through March 8. (Photo by Philip Hall/University of Alaska Anchorage)

Christopher Evans-a junior theater major-served as Daniels's assistant technical director this season, and took the stage as both Duke Orsino in Twelfth Night and Hamlet in Rosencrantz and Guildenstern. He only had positive things to say about his experience this season.

For one, the façade helped the student actors step up their Shakespearean game. "Especially with Twelfth Night, it immediately gave some authenticity to the play," Christopher noted. "The action that happens in Shakespeare makes a lot more sense on a façade because it was written for those stages. So the acting and the blocking came a lot more naturally." 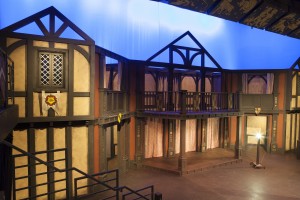 The stage will revert to Tudor design for the final show of the season, but will transform into a backstage setting, with staircases replacing the Juliet balconies. (Photo by Philip Hall/University of Alaska Anchorage)

"From the design point of view, building a set of this size is something most students do not get to do while they're in school. Putting this big of an undertaking on my résumé is really awesome," he continued,  surveying the set from the theater's back row. "Taking it from a drawing into this, every step of the way, it's been a great process."

He's not alone. The façade shook up the whole theater department. "From a student body perspective, this is the most excited I've seen people about a season," Christopher added.

Daniel admits to pushing his set design students hard this semester, and he agreed with Christopher's assessment. "It's a big undertaking and we have a pretty small department, so what we were able to create I think is pretty amazing with the amount of student help," he added. "It's really brought the department together."

Catch the ghostly afterlife romp Rosencrantz and Guildenstern Are Dead before it departs this mortal coil. The show runs Fridays, Saturdays and Sundays Feb. 27-March 8.

Zombies take over the stage for William Shakespeare's Land of the Dead: A True and Accurate Account of the 1599 Zombie Plague. Shows run Fridays, Saturdays and Sundays April 10-26.

Tickets for both shows are available at UAATix.com

"The ghosts of theaters past" is licensed under a Creative Commons Attribution-NonCommercial 4.0 International License.