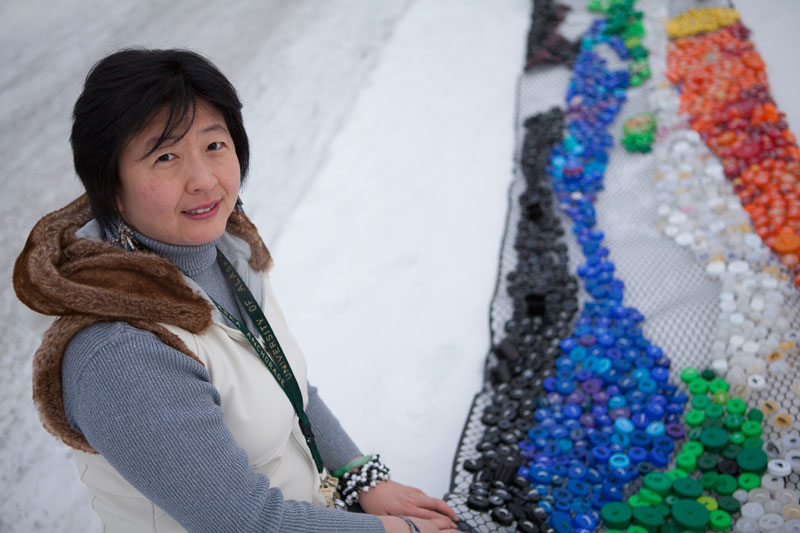 Herminia Din next to her "Flow of Color" Winter Design Project started in 2014 and continuing this year in the PSB Lobby. (Philip Hall/University of Alaska Anchorage)

Seems like Herminia Din has a problem. This professor of arts education, born in Taipei, educated at Ohio State University and teaching at UAA these last dozen years, planned this week for an outdoor design challenge centered on the campus Cuddy Quad.

Her idea is to get people out-of-doors and engaged with their winter environment as it plays out on the big open square separating some of the oldest buildings on the west side of campus.

Typically, students and faculty scurry across that empty expanse, bound for their next class or a warm-up cup of coffee at the Cuddy cafeteria. It certainly looks as if this outdoor transit is something to be endured, not embraced.

But, what if the walkers stayed and played?

Din has reason to wonder. Over the past few years, she's attended symposiums and exhibits sponsored by the University of the Arctic Network, a group of international universities in northern climates to which UAA belongs. Her travels have offered a good sampling of how Finns, Norwegians, Icelanders, Swedes and Danes experience their winters.

With Finnish friends, she's strolled the Kemijoki riverbank in Rovaniemi as local college students lit up the ink-black night by igniting roughhewn but artistic wood and straw sculptures, like so many serial bonfires. What started as just one or two a few years ago has blossomed into a promenade of more than 20, a November focal point for about half the town of 50,000. 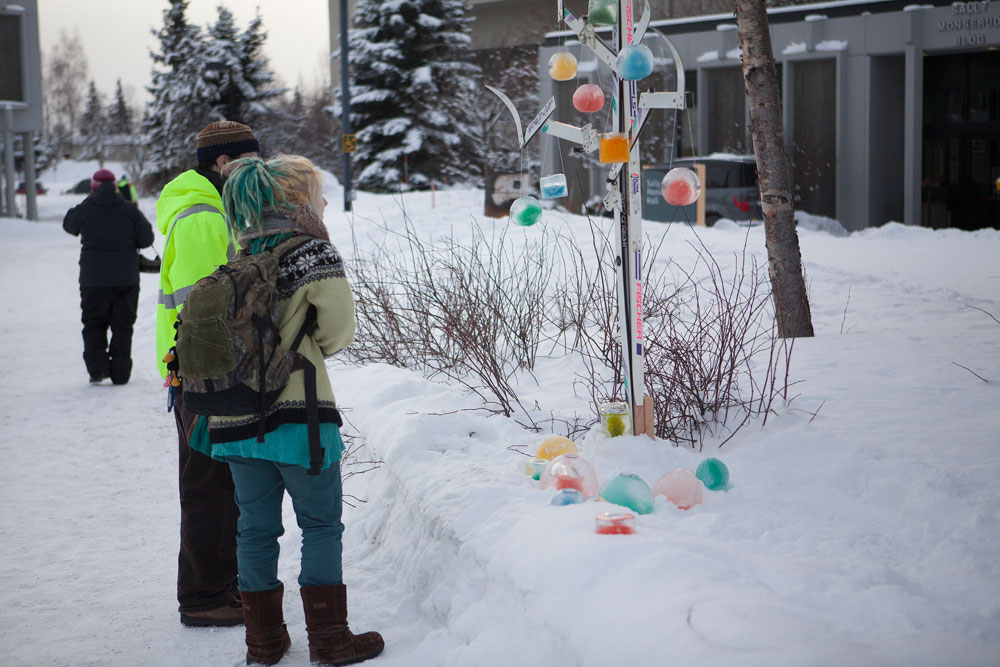 During Winter Design Project 2014, frozen spots of color against the white snow stood out and attracted attention. (Philip Hall/UAA)

"The heat wave just sweeps across you," Din said, "It's phenomenal." And it's not just the yellow flames lighting the night, but the structural designs that emerge through the blaze. Then there's the warm red wine with spices passed among spectators. "The smell of the wood, the heat, being out in the environment for an hour and a half, it's really nice."

Something else she noticed in Norway when she met early education professors at the University of Nesna: Kids there don't just go out for recess. Teachers join them with an invitation-what shall we build today? An igloo? Now what's the story behind it? Teachers and students invent as they go. She showed me a picture of a monster village made from snow that kids could crawl in and out of.

"They problem solve, design and build, then tell stories about it," Din said. "It's much more than just sending kids out to run around on a playground."

These same Norwegian educators are at UAA this week to collaborate with early childhood education students in the design and building of a snow playground for children right on the quad.

Other academic classes stepped forward to contribute elements. The health and physical education students and faculty plan an obstacle course. World indigenous music students will freeze tubes of water for ice chimes. A language class plans to scrawl Spanish graffiti on some of the white snow and a print-making class will try silkscreening. A math class plans to display an ice Klein bottle, or Kleinsche Flasche, a mathematical wonder shaped like a flask with no insides. An art class plans wooden cairns while anyone and everyone is invited to build a snowman; Din hopes for dozens.

The day she told me all this, temperatures hovered in the low 40s. Like the Iditarod competitive start forced from Anchorage for lack of sufficient snow, Din's winter design project looks precarious, falling victim to February's banana-belt temperatures.

This is Din's second run through. The first, last year, was inspired by 2012's record 176-inch snowfall. This winter, Anchorage has seen little more than 19 inches.

What's interesting is Din's reaction to the weather bump. Campus facilities workers rushed to help her. "They said, 'Let us make the snow! We can borrow the snow-making equipment from Fur Rondy'" and fill the quad with the fresh white stuff. 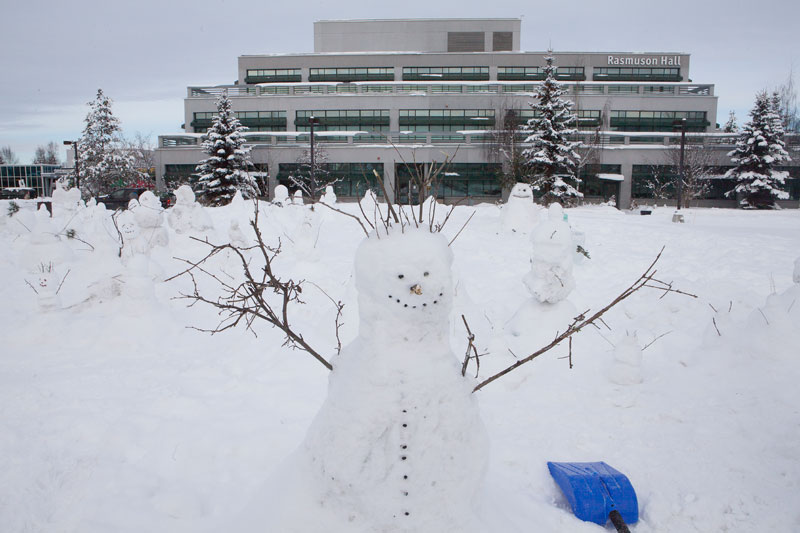 Thank you, but no, Din told them. Her design challenge requires participants to make something from what exists naturally. Her signature work as an artist is creating functional art from found or existing objects, something she calls 'junk to funk.'

Her own contribution to the winter design project was to be frozen denim blue jeans, repurposed from thrift shops and frozen into walking shapes all around the quad. She came home from a recent visit to find test models left posed on her outdoor deck had collapsed into melted heaps.

Her sensitivity to using what's here, right before our eyes, may hold a lesson for us all. Dramatic weather shifts seem to signal a taxed planet. Nature's inability to deliver snow for a design project is certainly something to notice, Din says. But you accept it and you continue to work with it.

I half-suspect she'll invite students to show up in flip flops and thrift-store luau shirts to splash in puddles, if that's what Cuddy Quad becomes.

A version of this story by Kathleen McCoy appeared in the Alaska Dispatch News Sunday, Feb. 22, 2014.

"Winter Design Project: Let there be puddles" is licensed under a Creative Commons Attribution-NonCommercial 4.0 International License.