A career in service at Service High

Among the nearly 1,800 students at Service High School, Adam Ahonen reckons he knows 1,100 on a first-name basis. It seems incredible. But then you hear how much he's involved. His dedication to the students-and not his knack for names-is what's truly incredible.

After graduating with a special education degree in his native Minnesota, Adam headed up North. The avid rafter/mountaineer/snowboarder/fly fisher was drawn to Alaska for the outdoors, but also for the opportunity to helm the special education program at Service. 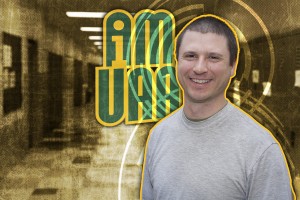 I AM UAA: Adam Ahonen, M.Ed., special education, '14, stands in the hallway outside his classroom at Service High School. (Photo by Philip Hall/University of Alaska Anchorage)

Since moving to Anchorage, he's created valuable opportunities for his special needs students and worked hard to set them up for success and independence after high school. In between, he coaches three sports, launched several clubs, organized student trips and even earned a master's at UAA.

Back in high school, Adam admits he wasn't the best student. Confident he would coast into college on a soccer scholarship, he wasn't especially focused or rule abiding. When scholarships fell through, he had to reassess.

While in college, Adam took a job providing in-home care for kids with disabilities, covering the gap after the school day and before parents returned from work. Meanwhile, he also volunteered for a local soccer program, which connected him with Special Olympics. Both on the job and on the soccer field, he made a key observation-special education was almost completely dominated by women.

"I realized there were no guys in the field," he said. "And a lot of the kids were living with just their mom ... I was working with all these boys and I was the only male staff they had." Realizing a need for male support-especially in a field where bathing and changing could be part of the job description-Adam opted to change his major to special education.

For the past 11 years, Adam's helmed the special education program at Service High School. He has about 25 students who stay with him all day, every day, through their four years at Service. The curriculum is diverse, but largely focused around life skills. "When you get to high school, you really need to work on functional stuff that will help you be successful and be as independent as possible," Adam explained.

That level of success is different for each student, so his job requires a lot of direct attention. "The kids needs are so varied," he said, "so for math we may have some kids who are budgeting [paychecks and bills] for a whole month ... to some kid trying to memorize their phone number... It's a very very wide spectrum, but it's all basically functional stuff that will help them be more independent."

That means a lot of class trips to familiarize his students with the community. He often visits vocational job sites with students, and takes them shopping, bowling and skiing throughout the year. Occasionally, he'll load the bus for an overnight at the Alaska SeaLife Center in Seward or at Challenge Alaska in Girdwood-an especially tall task considering each student's unique health care needs, plus the anxiety over a rare absence from mom and dad.

It's a challenging task, but Adam has plenty of help. Aside from his co-teacher, Adam's built a rotating crew of student assistants through his peer teaching program.

Adam devised peer teaching to bridge the gap between his classroom and the other students at Service. Each hour, six students join his class to make one-on-one connections with special education students. The elective credit-only available at Service-is reserved for juniors and seniors. When Adam first launched peer teaching a decade ago, he took what he could get-mostly students serving in-school suspensions. Now, though, everyone from the football team to the theater crew is involved.

In Adam's eyes, peer teaching has far-reaching effects across the student body. When freshmen football players see their team captain in the special needs classroom, it changes the whole culture-they'll think twice about mocking their peers. Likewise, they'll be more inclined to get involved when they become upperclassmen.

"It's kind of running itself now, but it definitely does take that catalyst of getting it going and getting kids in here and making them feel comfortable," Adam said.

The most impressive thing, though, is that peer teaching is among many Adam-initiated student-led endeavors at Service. He launched a recycling club, which is now under student control. Likewise, he created an innovative community outreach group called the Green Thumb Project.

Several years ago, Adam had a student with severe test anxiety. To avoid extra stress, Adam worked with the student to develop a portfolio of community service projects to complete. They connected with refugee resettlement programs and fired up the underused greenhouse at Service to grow vegetables-Adam's student provided food to the refugee community, and they in turn sold the vegetables at a farmer's market in Mountain View. The student graduated, and the ambitious task-called the Green Thumb Project-is now thriving. Students do all the planting, scheduling, picking, plucking and delivering, while the refugee community still gains valuable vegetables, revenue and English skills from the farmer's market.

Adam is a truly inspiring fellow. He's clearly dedicated to his students, but his focus extends throughout Service and across Anchorage. The city is his classroom and he seizes every opportunity to prepare his kids for success. Likewise, his attention to community engagement means the city can learn from his students as well.

He's incredibly modest, though. "I think that my job's pretty easy compared to being a parent of a kid with disabilities," Adam noted. Yes, he may have 25 students every single weekday, but he understands the stress facing parents. Will my son succeed? Can my daughter handle the world? "I think it's important for the school to help take on some of that and get them out there," Adam said.

He's been a busy man for over a decade, but he's starting to shift gears. His clubs are now in the hands of students, and he's taking a step back from coaching as well.

Why? At the time of writing, Adam was expecting his first baby in two weeks time, along with his wife, Mary (Pearce) Ahonen-a fellow UAA grad who happens to be a two-time All-American for the Seawolves track team.

"A career in service at Service High" is licensed under a Creative Commons Attribution-NonCommercial 4.0 International License.