Imagine what it's like to leave your country and forge a new life in a strange city, where you struggle to understand the culture and find work that will support your family. 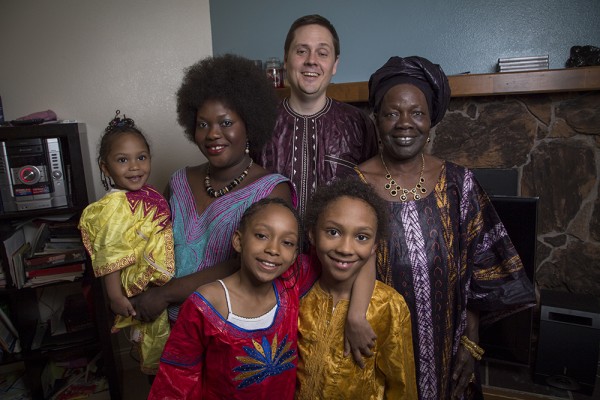 That's what Ngone Vaught faced after moving to Anchorage in 2008, six years after marrying a Peace Corps volunteer she met in Mali.

"My husband came here first to interview; he told me I would like it," she said. "He told me about the fish. I love Alaska because of the fish. We love fish. I said, 'I want to go there.'"

Vaught's unfamiliarity with American culture initially stymied her efforts to learn English, until she connected with Alaska Literacy Program.

"Other schools, the way they teach, you're on your own," Vaught said. "They give you the book and sometimes the computer will talk to you. This school, ALP, they communicate with you, tell you, 'This is a car,' 'This is a trash can.' They show it to you, teach it to you until it's in your mind. I lived in California for five years before coming here but my mother came to Anchorage from a small African village. [ALP]  took my mother to Costco, showed her how to push the cart. They teach you what to do if you have a car accident. They teach you about everything. They care about the students."

ALP is just one of the organizations taking part in the UAA Center for Community Engagement & Learning's upcoming "Urban & Rural in Alaska" conference on March 27, which will begin in the UAA Student Union Cafeteria at 9 a.m.

The conference will feature community-engaged projects involving faculty, community partners and students presenting together in Rasmuson Hall classrooms, transition into "rapid-fire" presentations by faculty and conclude with community networking sessions focused on the environment and public safety, women's issues, a welcoming community, youth and education, arts in the community and homelessness and substance abuse.

ALP's executive director, Polly Smith, plans to attend the conference, with the hope that it will spark new ideas and partnerships that could help her student/clients succeed.

"It's hard for people who don't speak the language of the community to have access to services and opportunities," Smith said of the immigrants and refugees her organization helps.

"It's enriched because it engages the audience with the experts and brings all perspectives into view, into consideration," Smith said. "This year, we're hoping for some ways to connect our particular student body with the staff and expertise of the university and its students."

Smith said ALP and its board just finished a strategic planning session, and one of the priorities that emerged for the coming year was social entrepreneurship: What activities would earn money and support ALP's mission.

"How do we connect with our community in providing a network, so there's a continuum of community services for individuals to access?" she said.

"It's just so much fun for the students to realize the diversity that exists in Anchorage when they do projects with our student body and staff," Smith said.

Vaught now holds a high school diploma she earned through the Adult Learning Center and a cosmetology license she earned at the Academy of Hair Design. She manages her own business as a hair stylist and helps ALP help other immigrants not only to learn English, but also to learn about how to take care of their health and safety and orient themselves in an unfamiliar place and culture.

As a peer language navigator, she learns from a health educator about such things as proper hand-washing techniques, flu shots, self-testing for breast cancer, mammograms, diabetes, how families should equip a backpack with supplies they'll need in case of an emergency and how to respond if there's an earthquake or tsunami. Then, Vaught translates that information into her native French and Wolof languages, to teach African women who understand those languages. The health knowledge ALP offers has helped her mother and brother, who have struggled with diabetes.

"My brother, when they teach him about his diabetes, I think they saved his life," Vaught said. "They told him, 'Rice is bad for you, bread is bad for you.' He doesn't eat rice or bread anymore and the school helped me [help him]. I'd tell my mother, 'Mama, you can't have French beignets anymore, they're not good for your health. Now she eats collard greens. She stays away from sugar now, and rice. If she eats rice, it's going to be brown rice."

Vaught still hones her English language skills-especially reading and writing-with the hope that she will eventually be proficient enough to take classes for a career in health services, beginning with becoming a certified nursing assistant. She hopes to enroll at UAA in the fall.

"Life here is not easy," she said. "There's so many things [immigrants] don't understand. This school means a lot to me. As long as I live in Alaska, I'm going to keep translating for them."

"'They show it to you, teach it to you, until it's in your mind'" is licensed under a Creative Commons Attribution-NonCommercial 4.0 International License.