'It probably would have saved me five bazillion steps'

Taking the scenic route is the credo of Rachel Shercliffe, who describes herself as a typical student at UAA. 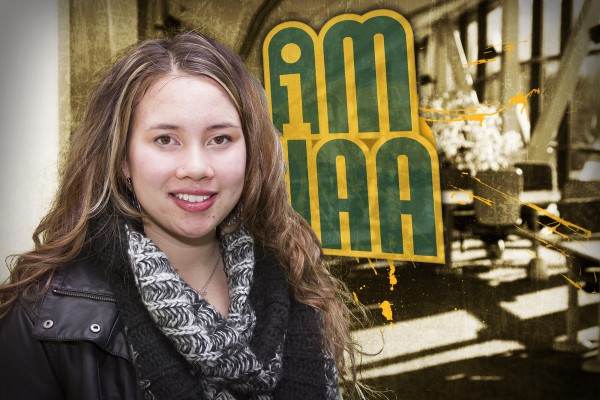 "I enjoy the normal things," she said. "I'm a pretty outdoorsy Alaskan. I enjoy getting out and being in the mountains and getting fresh air occasionally. I certainly have a love/hate relationship with running. I apparently still have friends. Netflix binges-sometimes that happens when I'm in school. I drink copious amounts of coffee, I'm sleep-deprived, but I still try to do it all."

"All" for Shercliffe might be overwhelming for many. Shercliffe volunteers every week in the pediatric and pediatric oncology units at Providence Alaska Medical Center, where she also works as a scribe. She also volunteers at UAA's simulation lab, serves as co-president of the UAA chapter of the American Medical Student Association, researches lung tumor cells for a cancer immunotherapy project with UAA's Dr. Eric Bortz, is preparing a paper and poster project for the upcoming Undergraduate Research and Discovery Symposium, and plans to attend WWAMI's 10th-annual PreMed Summit. That's not counting her time in class and the hours she spends studying-both for her courses (Biochemistry II, Immunology and Research) and for her upcoming Medical College Admission Test (MCAT).

"Simply put, I don't have a life," Shercliffe, a senior, joked. "I've certainly most enjoyed this semester. When you get into what you love doing and you take some of these selective [biology] courses, I think things get interesting. Finally the pieces start falling into place and there is a glimpse of a not-so-far-off career. Gross anatomy? Awesome. Immunology? Awesome. I'm even really enjoying biochem. I think as every other student will tell you, there is a struggle to get through the 100-level chemistry and physics classes. Life appears very impossible at those times. And you tell yourself that if you can pass you will hopefully probably never see it again-at least until the MCAT swings around and you have to relearn everything. But then after that, hopefully never to see it again!"

"It's essentially an information base and outreach for anyone," she said. "It's directed toward students but I think anyone would benefit. They have keynote speakers, you're able to tour the facilities so you get a preview of what you're getting into and they have mock interviews. Last year, there was a wonderful physician who I actually work with in the ER who taught sutures on bananas. And I think that's just so fun. What better exposure than something like that? If I knew about it in high school, it probably would have saved me five bazillion steps on being more prepared."

Shercliffe grew up in the military, living in Michigan, Colorado, Panama, England and Maryland before the family settled in Alaska. Her father retired from the Air Force a few years ago (he now manages UAA's simulation lab at the Health Sciences Building) and her mother works as a telehealth nurse for the Veterans Administration. One of her brothers attends UAF, the other is a member of Seawolf Debate.

"Despite the medical influence I had a very unbiased upbringing," she said. "They told me absolutely nothing, not even a single drop of a medication name, a patient story... I didn't even know what my dad did most of the time he was in the Air Force. If I had known I'd be going in the direction of medicine, I guess it would have been nice to start exposure from an early age. But how is one supposed to predict something like that? We can't all be a Mozart or Beethoven and embark at an early age; life is about discovering your own path."

"This is the longest-term home I've had," she said. "Fortunately, I've had a cool upbringing: being able to travel and live a lot of places. That's why I'm interested in programs like the WWAMI program, because then I can go participate in medicine, get my residency somewhere else and then return here with that payback program set up."

Medicine is something Shercliffe has always wanted to engage in. Human anatomy was her favorite subject in high school, but she concentrated, then, on doing well in her advanced-placement courses, taking AP tests and "hanging out with friends."

"I saw graduation as the big deadline and was going to tackle everything else from there afterward," she said. "I didn't really formally start resume-building and application-adding until my freshman year of college. That was when I turned 18 and was able to volunteer over at Providence in the 'peds' (pediatric) unit. I think from there my interest was piqued and captivated and I wanted to do more, which is kind of hard here because it's challenging to get your foot in the door, medically speaking, just because you need experience or a degree to do something here."

From that starting point, Shercliffe sought out other opportunities to learn.

"Volunteering opportunities, [job-]shadowing opportunities, any opportunity where you could speak to a physician or someone who had practiced in medicine," she said. "This exposure is the real preview of what medicine entails. If only the Grey's Anatomy or House TV shows were actual predictors."

Shercliffe launched her studies at UAA as a nursing major. She completed all of her prerequisite classes but a two-year waiting list stood between her and a nursing degree.

"I was scared if I left and went and did something for two years, I wouldn't come back," she said. "So I decided to keep going to school. And then I thought maybe I'd like to do something more involved, so I thought about [becoming a physician assistant] and ended up pursuing that route only to change my mind officially about six months ago for the med school route. I know this is what I want to do; it just took the scenic route to figure it out about myself. It has been a really transformative process."

Shercliffe is currently working to finish her degree in natural sciences and pursue her goal of becoming a medical doctor.

"I thought about going somewhere rural and assisting there," she said. "I think I would like to do that for a period of time. You get to see a lot more and you feel like you're partaking really closely in the community and immersing yourself in the experience. As for the future, I try to leave it unknown, as you never know what cool adventure will call your name, but hey, who knows? I could end up right back at Providence where my medical interest commenced. That would be very full circle, and a little crazy-Yikes! I could be your doctor!"

All of her volunteering and job-shadowing have shown Shercliffe what she doesn't want to do-"Surgery's not my thing because I like my people speaking and talking to me as opposed to being under anesthesia"-and highlighted what she does enjoy-pediatrics, family medicine and, especially, emergency room medicine.

"When I started working in the ER, it was without a doubt, 100 percent, absolutely what I wanted to do with the rest of my life," Shercliffe said. "I've never been more sure about anything.

What aspect of ER medicine most appeals to her, after the time she's spent observing it as a scribe?

"It's the physicians," she said. "I've never seen 30 physicians come together as a team and be so caring and benevolent and helpful and wanting and loving their job. Some have been working for 40 years, some 10. They love what they do and it shows. There's something about walking into a patient's room and seeing [a doctor] get on eye level, genuinely telling the patient that they're going to help them and they're going to do anything and everything they can. It's not about having a job, it's just always being able to provide assistance to people that need it and feel like you're taking part in something meaningful. I know it will be personally fulfilling and rewarding to be able to help people."

"'It probably would have saved me five bazillion steps'" is licensed under a Creative Commons Attribution-NonCommercial 4.0 International License.