University of Alaska Anchorage campus will be closed September 24, 2021 beginning at 6:40 AM, due to weather. Check your email for more information.

Eighteen months after Brandon Grimshaw enrolled at UAA, the Utah State University transplant was watching as a fellow engineering student aimed a just-purchased bow up into a tree near Huntsville, Ala., and shot an arrow and rope up into its canopy. 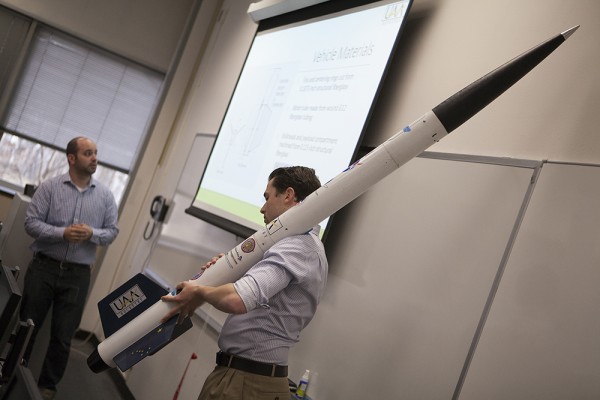 Jordan Shindle carries "Leonard" into a UAA engineering classroom where he and Brandon Grimshaw prepare to present their senior capstone project about their team's competition at NASA's Student Launch event in Alabama. (Photo by Philip Hall/University of Alaska Anchorage)

What chain of events brought Grimshaw from a UAA engineering classroom to the base of that tree on a farm in Alabama?

"We ate some gator tail and frog legs and ended up having a blast, came home with some awards," Grimshaw laughed.

It's not Mickey Mouse

Grimshaw began scouting for a team almost immediately after arriving at UAA, and the group began working in earnest eight months ago.

Their goals? Build a robot or car that could retrieve a three-quarter-inch-diameter, 4-inch-long soil sample from the surface of a "Martian planet," bring that sample to a launch vehicle and load it, launch the rocket to a height of 3,000 feet and then, at 1,000 feet on the rocket's descent, separate the "Martian soil" payload from the rocket and parachute it down safely.

They constructed a 77.7-inch-long, 4-inch-diameter fiberglass-with-graphite rocket containing a motor, charges and payload hatch, as well as an AGSE designed to retrieve a payload, place it into the rocket and position the rocket on a launch pad.

They tested their creation, Leonard-named in honor of the late Leonard Nimoy-at Big Lake.

"When we launched this, we had to get an FAA waiver out on Big Lake," Grimshaw said. "It's not a Mickey Mouse go out to the park and launch and go run around the park and catch it. It's a pretty big deal."

Grimshaw and his teammates spent three nights until 5 a.m. working on documents that included the team's proposal, preliminary design review, critical design review, flight readiness review, safety documents related to every aspect of the rocket and its performance, "and we just barely finished up our post-launch assessment review," he said.

"Each one of these were about 70 pages," Grimshaw said. "As you know as engineering students, it's pretty easy to fill up a bunch of pages because you have graphs and you have to describe what's going on, pictures and everything. But actually doing something where we're building it and we have to explain yes, that piece is pivotal and important because of this, and the calculations-it was very intense but worthwhile in the end."

Shindle and Beechinor used 3-D engineering software to devise a model for the AGSE. Corbin Rowe, UAA's machinist, used their drawings to machine and fabricate aluminum parts for the AGSE and helped create a launch pad that resembled a metal spider. 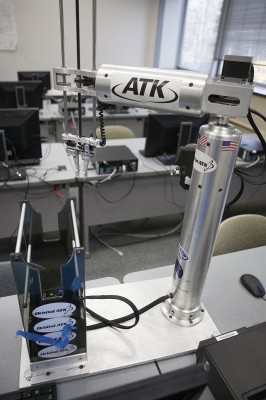 UAA Rocketry's Aviation Ground Support Equipment (AGSE) is designed to retrieve and place a payload into a rocket, for the NASA Student Launch competition. UAA engineering students created the AGSE and rocket between August and April, when the competition took place. (Photo by Philip Hall/University of Alaska Anchorage)

Throughout the course of the project, the students determined a combination of solid ammonium perchlorate fuel and equipment that would safely and accurately propel and guide the rocket at speeds between 304-380 miles per hour, as well as where to place gunpowder blast charges that would propel sections of the rocket away from each other.

"When calculating the deployment charges, you want a charge that's not too energetic or undersized, to separate sections of the rocket properly while it's in flight," Grimshaw said. "Why is it important to separate the sections? Because there are parachutes inside."

Berg and others on the team had to create and solve equations related to rocket descent rates (taking into consideration the weight of the nose cone and other components and drag from parachutes) as well as come up with figures for thrust-to-weight (output of the motor compared to the rocket's weight), static stability margin-"our rocket flew remarkably straight," Shindle said-and rail-exit velocity.

"We wanted to come off the pad a little faster," Shindle said. "[With the second motor] it comes off like a scorched cat."

Some of those equations they scrawled on napkins. "And some of it's tried and true, has to be this way, has to be this number," Grimshaw said. "The nice thing about engineering, some of it you have to derive your own equations but a lot of it was just plug and chug. That just means you can plug in the information to the basic equation and you're able to get an answer."

They also used simulation graphing software to assess what they could expect to see in a real-world launch.

"What's really cool, that makes me giddy...the red line is real data and the blue line is sim data," Shindle said, pointing to lines on a graphic he showed during the team's capstone presentation last week. "We launched a little high. We were shooting for the 3,000-foot mark with the hopes we'd be able to add ballast."

However, the team members, Shindle said, found out at the last minute that they wouldn't be able to use ballast-"so we put as much paint as we could possibly put on our rocket," he laughed.

'We got Leonard back'

In the Alabama competition, UAA's rocket reached a height of 2,860 feet "which was pretty good," Grimshaw said, "but 5 percent short of our goal." 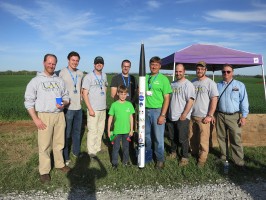 The rocket descended into that tree immediately afterward.

"I had to drive about an hour out and back to go to Dick's Sporting Goods to find a bow and some arrows," Grimshaw said. "The recovery system was shooting an arrow, tying off a rope to the other end, hoisting it back over. After six hours, these guys were beat up. A few had rope-burned hands. We were dehydrated and everyone was sunburned like nothing else, but we got Leonard back. We were able to record our altitude to NASA."

"We actually got full points for recovery," Shindle said. "Twenty more feet and we would have been on somebody else's farm." Those 20 feet made the difference between staying in the launch area and being disqualified.

The UAA team had only one member, Grimshaw, with previous experience working in high-power rocketry-but still managed to earn sixth place out of 32 university teams that competed (including teams from prestigious Vanderbilt University and MIT), third place in the "Mini-[Mars autonomous vehicle] division and won the University Level Rocket Fair Award, which, Grimshaw said. "is like a fan-favorite award."

Grimshaw says the project has been his dream and his baby.

"I didn't think I'd ever have the opportunity to do it," he said. "We've accomplished our dream of bringing rocketry to UAA. Watching a high-powered rocket go off is really cool. Kids seeing that, it gives them the drive to bust their tails to get in the aerospace industry or the sciences and math. They love doing the science but they hate doing the math, but if you have a drive to do something you can achieve it through one of these projects. It's been awesome."

Want to see the launch? See this video of the NASA Student Launch event, with the UAA interview at about 8 minutes and the launch itself at 45 minutes. To learn more, visit UAA Rocketry's website or Facebook page.