'You have to do the face to face'

Back in 2007, Ricardo Castillo lived in Florida, and was trying to decide what he should do. Should he go to college? Go to Bible college? Join the military? 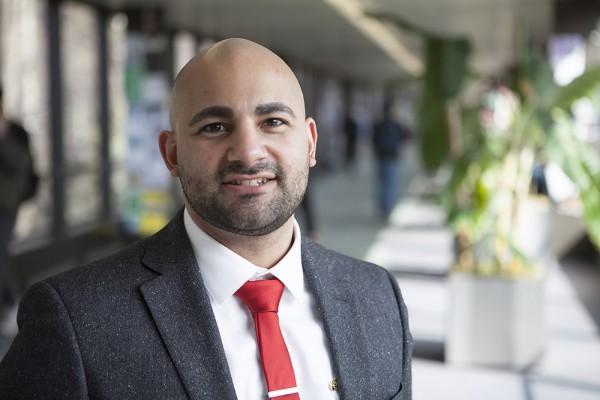 Ricardo Castillo served in the U.S. Army before enrolling at UAA to study global logistics and economics. He will receive his bachelor's degree May 3 at 2015 Spring Commencement. (Photo by Philip Hall/University of Alaska Anchorage)

He chose the military, a career path that led him from Tampa Bay to Anchorage, where he worked as a U.S. Army unit supply technician in the 1-501 Infantry Airborne. If soldiers needed to train at a remote gun range for a couple of days, Castillo was the guy who made things happen: having people gas up and move trucks to a given area to pick up those soldiers and take them to the range; ordering and transporting food and water and latrines; assigning weapons and ammunition and getting other training supplies to the right place, on time.

"Everyone thinks the Army is made of one culture, but when you go into different areas and have to deal with different types of people in order to get that certain item you need for your unit, you have to be adaptable to quick change," Castillo said. "Being resourceful is knowing certain people, finding that network, finding that niche in order to accomplish an objective, whatever it is that you need to get done. I loved it."

Castillo left the Army in 2011 and enrolled at UAA immediately afterward. What did he decide to study? "Because of my career field in the military, I decided the best route would be to go into what I knew."

Carving out a system

Four years later, Castillo is preparing to receive his bachelor's degree in global logistics (with a minor in economics) at the 2015 Spring Commencement on May 3.

While here, Castillo married his wife, Analisa, and welcomed two daughters. His oldest, 3, was born during his first semester and his youngest, born last semester on New Year's Eve, is 3 months old.

In addition to his studies, Castillo engaged in UAA's Emerging Leaders Program (ELP), as well as helping establish and helm the Phi-Alpha chapter of Tau Kappa Epsilon fraternity. During his time as president, TKE grew its membership from 10 to 34 in one semester and earned its charter within a year of becoming a colony-a rare occurrence among university fraternities. Castillo led by example, encouraging his fraternity to participate in student activities like last year's Spirit Run. Castillo is also a member of Anchorage Hillside Rotary, where he finds philanthropic opportunities outside the university.

What advice does Castillo have for students who are just starting their academic journey?

He says managing time was his biggest challenge-making the most of the hours he needed to study while spending meaningful time with his wife and daughters, accomplishing tasks he had at home, with ELP and the fraternity and somehow carving out time for himself as well.

"Sometimes we place so many things over ourselves that we forget our own basic needs," he said. "You need some separation. Whether that's, for Alaskans, hiking or hunting, relaxing or meditating, there are a lot of things you can do to balance out life, take a little bit away from everything that's surmounting on top of you. That quietness you find in life makes you excel."

"Structure. Repetitiveness. I would say having a schedule," he said. "That's difficult for a college student. It's definitely not easy for someone who's married and has two kids. But even for the college student, having a schedule and trying to stick to that schedule often provides a lot of success in managing your time, in managing resources that help you accomplish tasks. The repetitiveness of waking up at a certain time, doing something, studying, and sticking to that that can really help you."

Castillo said that thanks to his wife's support and help from scholarships, he didn't need to work full time while taking courses.

"I would wake up in the morning, drop my daughter off to school, come to campus, dedicate most of my time all day in studying," he said. "Being on campus, I found that to be the best measure for getting things done. I think these days there's just too many distractions that take away your focus from everything you're supposed to be doing. Whether it be your smartphone, whether it be at home, friends, extracurricular activities. I think being on campus is what is going to make you succeed."

Castillo says he thinks that is a problem at a campus where so many nontraditional students are enrolled.

"A lot of students don't want to be on campus," he said. "I think it's because they're just so embedded into their lives that are separate from campus. Nontraditional students don't think being on campus is really going to be the tool that's going to make them successful. I think they think they can accomplish things at home. For most, that's not true at all. Unless you're a person who is very, very self-disciplined. I came from the Army and I can tell you I don't have enough self discipline to keep from surfing the channels every time I want to take a break. To really be successful you have to confine yourself in an area where you take everything away, where you have resources readily available to you. And you have that here. I know not everyone may be able to be on campus as much as they like, but I think if you can, you should."

A key opportunity available to students at UAA, Castillo says, is access.

"That's one thing I think that's tremendous about this campus," he said. "I don't think we realize as students how much value is really funneled here into this university. We have professors from Harvard, professors from Oxford, we've had a Nobel laureate as Rasmuson Chair. For the size of our campus, what we have here, you can easily go and talk to a professor. Going to a university with 30,000 students, a professor can't operate at that capacity. That's why there are teacher assistants, other things that can help students, but pale in comparison to what we have here. I've never once gone to a professor who said 'See me in my office hours.' To have that streamline to a professor where they're willing to say, 'Hey jump on in my office, I'll give you 15 minutes and explain this theory to you,' from someone who's graduated from Oxford or who's graduated from Stanford, that's incredible."

Direct connections matter to Castillo. He knows the value of a handshake, a face-to-face meeting, of shared experiences-in the real world-and the power of those relationships that result.

"How do you penetrate those [career] networks, how do you engage?" Castillo said. "Facebook doesn't do it. Neither does LinkedIn. Those aren't the means of creating personal, credible relationships. It's by getting out into your community, engaging with the older organizations that have existed for hundreds of years. Those organizations are still organizations I believe in, Greek being one of them. You have to do the face to face. That's what truly builds relationships."

Castillo says that if he counts everyone in his social networks, he has more than 800 friends, "but I think I can count on my hands the number of people who would drop everything they have to help me."

"If I made a post saying, 'Hey, I'm moving down to Florida real quick because my daughter needs medical care close to this certain hospital. Is there any work for me?' Your Facebook friends aren't going to be able to accomplish that. Your LinkedIn isn't going to be able to accomplish that," Castillo said. "It's those people you truly developed a rapport with who are going to say, 'Hey, I work at this firm that has a position opening up.' Not only that, but this person wants to donate $10,000 toward your daughter's medical needs.

"Those are the kinds of relationships you're going to need to make that are going to benefit you later on-not clicking on a status and liking somebody's picture."

"'You have to do the face to face'" is licensed under a Creative Commons Attribution-NonCommercial 4.0 International License.