Around the world with ConocoPhillips 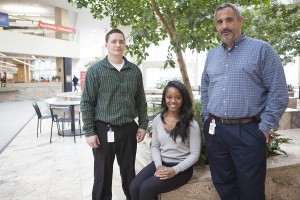 I AM UAA: Nate Brown, Ardrienna Everett and Tim Green are just a few of the UAA graduates now working worldwide for ConocoPhillips. (Photo by Philip Hall / University of Alaska Anchorage)

When your million-dollar machinery malfunctions on the North Slope, you can't just run to the hardware store in Deadhorse for spare parts. Companies operating in the Arctic, like ConocoPhillips, instead rely on their supply chain staff to keep toolkits stocked and operations running.

"If we don't have [a part] and something shuts down that operation, the financial loss opportunity is significant," noted Tim Green, B.B.A. '00 and M.S. '02, ConocoPhillips's Alaska supply chain manager. "Very significant."

Supply chains present a challenge in any environment, but Alaska adds an extra layer of logistics. Often, the ocean is too icy, the weather too fickle and the roads too long to get anything anywhere quickly. But proper planning and predictions can trump Alaska's extreme conditions. If supply chain staffers are doing their job right, you don't even notice they're there.

UAA is perfectly situated for a global supply chain program-Alaska has remote transportation challenges, but it's Northern location means 90 percent of the industrialized world is less than 9.5 hours away. With a training tailored for an extreme place like Alaska and a connected city like Anchorage, UAA's supply chain grads are ready to go anywhere in the world. And they often do. Through a strong association and collaboration with ConocoPhillips, UAA alumni are now in careers across Alaska and around the world.

ConocoPhillips is a multi-billion dollar company, but things can still slow down if any of the multiple parts in its processes malfunctions without a replacement on hand. To avoid this outcome, supply chain staffers at ConocoPhillips work to get things, essentially, from point A to Point Barrow. They purchase the supplies, negotiate contracts to find the best value, plan transportation logistics and stock the shelves when the parts reach their destination.

It's an immense task and a multifaceted operation, but thankfully there's a homegrown talent pool for ConocoPhillips.

"UAA has been a great resource with their logistics school. We've gotten a lot of great talent out of UAA," noted Tim. The company recruits at the largest supply chain schools in the country, like Arizona State, Penn State and Michigan State, but they have an employment pipeline at home, too. "I've recruited at a number of those schools and I'm just as impressed with the talent that comes out of [UAA]," Tim said. 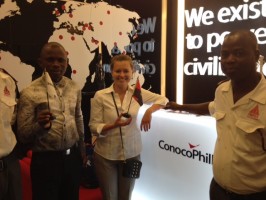 Olya Clark, B.B.A. '08, is one of many former UAA interns now working for ConocoPhillips. She travels to Luanda, Angola for work, but is currently based in Houston. "This field is very fast paced and exciting," she said (Photo courtesy of Olya Clark).

For the past several summers, ConocoPhillips has accepted one or two interns from UAA's supply chain program. Some-like Nate Brown, B.B.A. '13-end up working with the company after graduation.

As a student, Nate worked construction while he figured out his path at UAA. His time on a construction crew provided the perspective he needed. "It was amazing what a small amount of people can accomplish if they're kept properly supplied with whatever they happen to need-energy, raw materials, tools, whatever," he said. "And it was also amazing how little a lot of people can accomplish if they're not supplied with what they need."

Now at ConocoPhillips, Nate negotiates and manages agreements with large providers, making sure every piece of safety gear and hardware is stocked statewide and acquired efficiently. "When you talk about operations as large as ours, there's an awful lot of stuff bought every day," he said.

Ardrienna Everett, B.A. '12, also started as a summer intern, assigned to review the efficiency of ConocoPhillips Alaska's purchasing operations. "You don't get the roles that no one wants to do-no grabbing coffee or things like that," she said of the experience. "I was doing something that added value to the company." 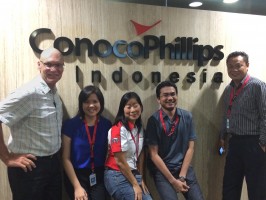 John Parker, M.S. '03 is based in Kuala Lumpur and travels Southeast Asia with his Malaysian coworkers (Photo courtesy of John Parker).

Tim, Nate and Ardrienna are lifelong Alaskans and they're happy to have a career in their home state. But ConocoPhillips operates in 23 countries around the globe, and as part of the global supply chain, employees get the chance to move around too. In fact, Tim has traveled to more than a dozen countries for work, and a few UAA alumni have launched international careers through the company.

John Parker, M.S. '02 currently works in Kuala Lumpur, after previous positions in Louisiana, California, Alaska, and Qatar. He's been in the oil industry for 38 years-the last 10 abroad-and has been working in supply chain since he was a teenager. "I've just been fortunate enough to work for a company that pays me to do work that I enjoy while also being able to experience life abroad," he said.

Although he built a successful career out of high school, John says he wasn't reaching his potential. After relocating to Anchorage with ConocoPhillips, he decided it was finally time to tackle college. He graduated in 1999 at the age of 45 and immediately returned for his master's. 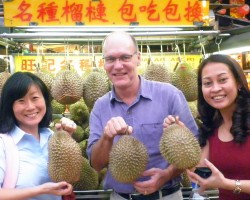 John moved to Malaysia over six years ago, but there's always something new to experience. He promised his co-workers he would try durian, a local fruit so pungent you can't bring it on airplanes, and they held him to it. (Photo courtesy of John Parker)

"I graduated from the inaugural [global supply chain master's] class at a perfect time in my life," he noted. International mergers were reshaping the business and opening global opportunities at the time John graduated. "I doubt I would have been able to differentiate myself from others without the unique credentials associated with my degree."

He's grateful to work abroad, specifically in his current role training and advising Malaysian supply chain staff. "Trust is earned by respecting cultures and listening in ways that convey confidence to speak and express," he said. "I have been accepted by the local culture here, have left my mark and now have many friends and long lasting relationships, which is probably my biggest benefit." 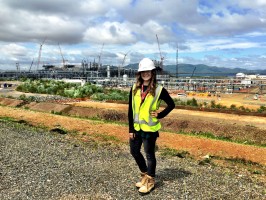 Despina Maroulis, B.B.A. '08, interned with ConocoPhillips as a student and has worked for the company in Anchorage, Billings, Houston, Singapore and Brisbane since graduation. (Photo courtesy of Despina Maroulis)

Despina Maroulis, B.B.A. '08, has had an equally globe-hopping career.

Despina was drawn to the logistics field after growing up in Anchorage and recognizing the state's unique transportation challenges-no roads to most villages, no rails to the Lower 48. "I took an Intro to Supply Chain course with Professor Oliver Hedgepeth and was hooked!" she said.

She interned with ConocoPhillips while at UAA and, after graduating in 2008, she was quickly on the move. "I am the first person in my family to graduate college, so getting a degree and starting a career with a major oil company was a big deal," she said. She has worked in Anchorage, Billings, Houston and Singapore so far. For the past seven months, she's been in Brisbane, Australia as a contract specialist on a large joint venture among ConocoPhillips and two other companies. 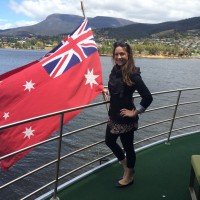 Now in Brisbane, Australia, Despina works as a contracts specialist on a $30 billion joint venture between ConocoPhillips and two other energy companies. (Photo courtesy of Despina Maroulis)

"My experiences have taught me to be open minded and to consider every opportunity," she said. "You never know where the journey will take you and in my experience, taking on the unexpected has kept things both challenging and exciting."

Thanks to the collaboration between ConocoPhillips and UAA's global supply chain program, some alumni have the chance to access a world of career opportunities.

"One of the best parts about working for a global oil and gas company is the exposure and access to so many different aspects of the business," Despina said, "Combine that with the support to get experience in different business units and functional areas and you're left with exponential opportunities to learn, grow and stay challenged for a lifelong career."

"Around the world with ConocoPhillips" is licensed under a Creative Commons Attribution-NonCommercial 4.0 International License.