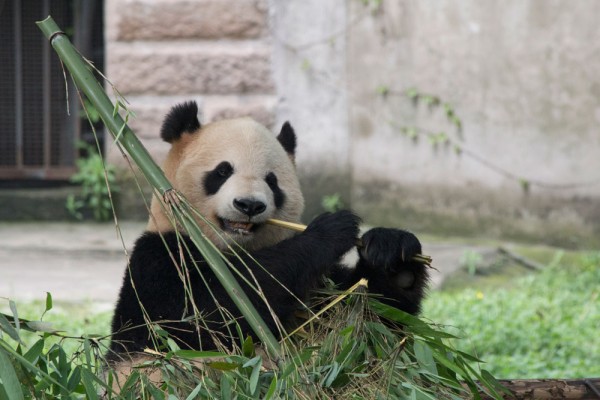 A panda eating bamboo in front of tourists at the Chongqing Zoo. (Photo by Wesley Early/UAA) 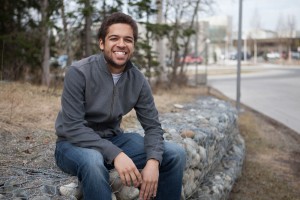 As I looked in the mirror on the train in the middle of my baby wipe bath, I thought "I hope I don't smell too bad." That's been the main concern as we travel from Xi'an to Chongqing, the first day where we couldn't shower in the morning. The train is considerably hotter with four grown men squeezed into our car, but using deodorant before and after sleeping is alleviating the funk escaping my body. My hair is definitely looking pretty rough right now. Makes me happy I got a haircut before I left Anchorage. The train ride is definitely bumpier than the last ride into Xi'an from Beijing. I awoke to a shaky bunk that tossed me awake. Our Chinese bunk mate seemed a little more accustomed than us. A perk of being a Native, I guess. 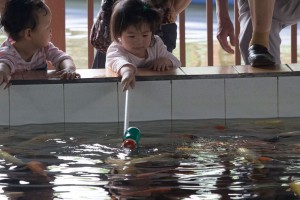 A little girl feeds fish with a baby bottle like object at the Chongqing Zoo. (Photo by Wesley Early/UAA)

Professor Zheng described Chongqing as a city famous for hot pots (Asian stew cooked at the table) and pretty girls. Walking off of the train, I definitely felt more hot pot than I did pretty girls. The place felt like a sauna with all of the people crammed into the tight spaces.

As I walked out I noticed two things. The same avengers commercial I'd seen all week and a dense smog mixed with humidity. That humidity stayed throughout the entire visit making our group of unshowered Americans a little stickier. 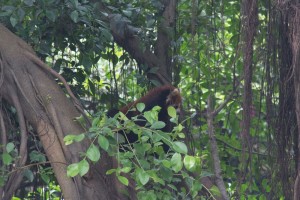 A red panda at the Chongqing Zoo. (Photo by Wesley Early/UAA)

Of course the highlight of Chongqing was visiting the Chongqing zoo and getting to see the pandas. Unfortunately, pandas' reputations precede them and they are indeed very lazy. There were very few outside of their cages. One of them was enjoying what looked like a marvelous nap on top of a tree branch. The other was hastily eating bamboo and occasionally looking up at the tourists trying to get pictures. He obviously didn't care about the tourists as he departed soon after his meal. Quite the diva. There were also red pandas which are actually related closer to raccoons than pandas. They were very timid as well.

After a long day of museum visits and panda viewing, we attended a restaurant famous for one of Chongqing's two specialties: hot pots. The food was absolutely delicious. The hot pot was worthy of its reputation. 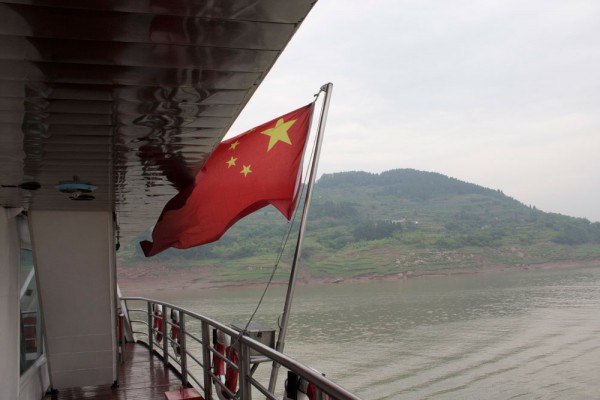 The Chinese flag overlooking the Yangtze River on the Victoria Jenna Cruise. (Photo by Wesley Early/UAA)

The longest excursion that we had that day was the two hour drive from Chongqing to Feng Du, where our cruise ship was docked. We were intermixed with a large group of elderly Chinese people, so it was easy to tell where our group was on the bus. 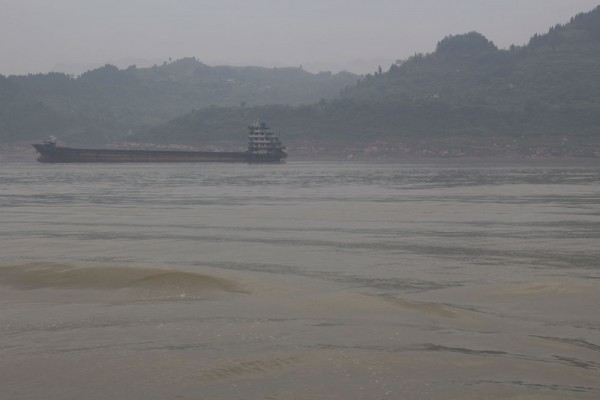 A fishing boat sailing on the green Yangtze River. (Photo by Wesley Early/UAA)

We walked what seemed like the most dramatically long dock in order to board the cruise. The first thing I noticed in my room was that the bed was considerably softer than any other one I'd had this trip. With my head on my first soft pillow, I drifted off that night after traveling about the boat a little. The water in the Yangtze River was gross to look at and after a week in developing China, it reinforced my appreciation for bottled water.

Wesley Early was one of nine students who traveled to China this summer as a part of an economics class dealing with globalization and business opportunities in China. Read more of their Postcards Home from China.

"Postcards Home from China: Of pandas, bottled water and soft pillows" is licensed under a Creative Commons Attribution-NonCommercial 4.0 International License.