'She is this little bundle of energy'

How did a woman who grew up in New Hampshire find her way to a career as a biology professor on Alaska's most renowned island, Kodiak? 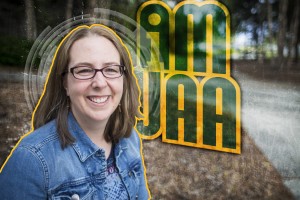 Becoming an architect had been Dr. Cindy Trussell's dream from girlhood.

"Dad's an electrical contractor," said Trussell, who, for 10 years, has served as chair of the natural sciences department at UAA's Kodiak College. "He would bring home all these house plans and I just loved poring over them. I was pretty convinced I was going to be an architect."

At age 11, Trussell begged her parents for a computer and got a Commodore 128-"I would spend hours upon hours upon hours programming that thing," she said. "To do things that now we'd be like, 'Really? You spent time programming to draw a smiley face or to make a ball bounce?' Yes, I spent tons of time doing that."

In high school, Trussell set her sights on college and delved into math, biology, chemistry and physics. And, she traveled to Michigan for a summer study architecture program between her junior and senior years.

"Somewhere in the midst of my senior year in high school I was like, I can't do this," she said. "Not 'I didn't want to do it,' But you realize certain fields require a talent and other fields you can just work really hard and be pretty good at it. Architecture is one of those ones that really requires a design talent."

She applied to architecture schools anyway. Her choices: University of Virginia, Washington University in St. Louis, Rice University in Houston, and the university she ultimately selected.

"I went to Miami," she laughed, "because I was deciding where to go to school in the middle of winter."

Once she arrived at the University of Miami, Trussell launched into the two years of undergraduate work she needed to complete before entering its four-year architecture program. She chose to major in physics. "Then I got a math minor because you have to take a lot of math to be a physics major," she said.

As beautiful as Miami was, Trussell wanted to travel to other parts of the world and study in another country.

"So I looked into that and ended up studying abroad at Flinders University in Adelaide, Australia," she said. "Before I left, as an undergrad you're trying to get all your general education requirements taken care of. So I thought it would be great to be able to take Australian literature, all these Australian things to fill my history requirements."

None of those departments, however, would approve those courses. So Trussell made a pivotal choice: "I took more science and math when I was in Australia and wound up switching to being a biology major. As a physics major you have to take another full year of [a different kind of] science and I took biology over there and it was fantastic-taught by five or six other instructors."

Trussell says that in the days of introductory biology survey courses, one teacher would usually instruct students in the various subfields of biology.

"In Australia, each person who taught one of those subfields, it was their field of interest," she said.

Trussell returned to Miami with a dual major: marine science and biology. "Miami has a really good marine science program," she said, "so I figured I might as well put that as part of my degree."

But there was one problem.

"As a senior, I wanted to do a research project," she said. "I was going to do something marine but I get really seasick, so I wound up studying birds."

"I was recording their song both in city parks in Miami and in the Everglades, then bringing those recordings back to the lab and putting them on the computer to measure dominant frequency, mean frequency, temporal patterns, things like that. I think [I liked it because] it probably tickled enough of the number aspect of things-the patterns and numbers."

Numbers and patterns influence not only bird song, but two of Trussell's other passions as well.

"I quilt now," she said. "I play music. All through school I played the piano. I sort of play now but I don't have a piano at home, so there's a piano at the college I play when no one else is there. There's definitely a math thing about music that I like, and bird song. Even though it seems bird song would be much more qualitative, it actually is quite quantitative when you get down to it, which is pretty fun."

'It makes the world that much more interesting'

Studying birds resonated with Trussell so much that for a couple of summers, she traveled to Western Pennsylvania to work as a field assistant.

"It was my job to record 300 songs from each of the song sparrows," she said. "I would just be dropped off in a field and they had their territories all along the edge of fields. So you could just go from one territory to the other and record them. It was fun. I got really interested in what the different songs were and being able to identify them. It tickles that being outside as well-I was pretty certain I didn't want to be in the lab."

Then,Trussell enrolled in graduate school at the University of North Carolina at Chapel Hill.

"I studied Carolina wrens and song and parental behavior," she said.

The experience highlighted what she found intriguing about biology.

"Every new thing that you learn, whether it be a new species of bird or a new plant, it makes the world that much more interesting because then you notice when you see something rare," she explained. "For example, if we were to see a flamingo outside, we'd be like, 'Whoa! That doesn't occur here!' But if we didn't pay attention to the wildlife around you, it would be just like seeing another magpie.

"For the little birds," she continued, "it's kind of cool because in Kodiak we only have four regular species of sparrow, so when there's a fifth one we almost never see, that's exciting. But it came from the song first, from having to be able to recognize that's a song sparrow song, not some other species' song."

Trussell earned a Ph.D. in biology, with a concentration in animal behavior, and then went to work as a waitress.

"I needed a break from academic writing and research and decided to take a job at a restaurant," she said. "I did enjoy my time there because the rest of the staff was so smart and fun."

"[My husband and I wanted to live] west of the Mississippi because we'd been on the East Coast our whole lives," she said.

She saw that Kodiak College needed a new chair for its biology department and applied for the job. She got a phone interview.

"That's when I looked to see where Kodiak was," she said.

Trussell traveled to Kodiak in May 2005, interviewed, "and it went really smoothly thereafter," she said. "One of the things that made me love Kodiak from the get-go was that before I even got to Kodiak to start teaching, I spent an entire week with the full faculty [at a Learning Communities event at Evergreen State College], really getting to know who they were. They were sharing all the details of what Kodiak students were like, what Kodiak as a community was like."

She was new that year, and so was the math professor.

"We arrived on the same ferry from Homer," she said. "All the faculty showed up to greet us on the ferry. It was a really warm and welcoming beginning to a career. Great job. More than a job...a great life."

'So engaged to be there'

"Kodiak students are so...engaged to be there," she said. "Most of them are parents, they're working and they're taking classes. Because they're putting so much in, I think that as an instructor, you can't help but just want to give as much as you can to them, because they're working their tails off."

One of those students, Kelly Zeman Harris, says Trussell is her favorite teacher. "She is this little bundle of energy, always learning herself, too," Harris said.

The UAA nursing student says Trussell brings in new information, via TED talks and journals and brings in models for chemistry to help visual learners. Trussell works with the fisheries research center to have her students gather shellfish and test their own specimens for PSP levels.

"In organic/biochemistry, we worked with the research center testing lipids of different types of sea creatures, the different omegas, really teaching us the difference between farmed salmon versus wild," Harris said. "I don't know how she can put everything together and teach all of these topics so well. It's a gift."

"'She is this little bundle of energy'" is licensed under a Creative Commons Attribution-NonCommercial 4.0 International License.